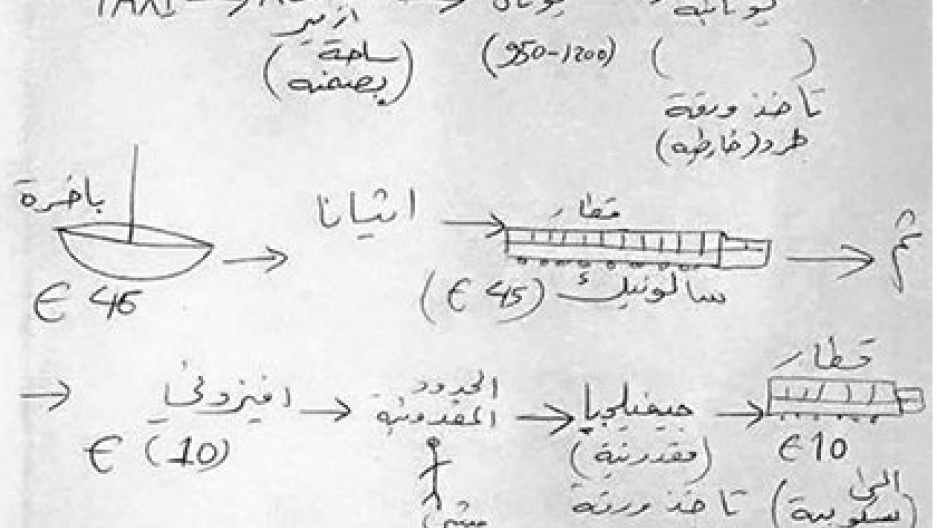 This hand-drawn diagram for the route from Turkey to Germany was recently posted on the Facebook page of one of Abdul-Ahad's Kurdish friends in Sulaymaniyah, Iraq.

It used to be a closely guarded secret.

But the logistics of how to flee war in the Middle East and journey to Europe without papers are now easier to learn than ever. In fact, there's even a simple how-to-do-it guide on social media.

"It's made of a few words, arrows, stick figures, a basic drawing of a train, two cars, a ship. Basically that map tells you how to leave Izmir in Turkey and reach Germany," says journalist Ghaith Abdul-Ahad, talking about a map a friend of his posted on Facebook to simplify the journey to Europe for others.

Abdul-Ahad's account of his efforts to trace the new migrant journey appears in the London Review of Books in a new piece called, Some Tips for the Long-Distance Traveller.  Abdul-Ahad says it’s a far cry from when he tried to smuggle himself out of Iraq in the 90s, at a time when migrants had little knowledge of the routes where smugglers prevailed.

"You basically stood shivering in front of a smuggler who you would hand your money and your fate," he says. "I tried for three years, I borrowed money, I spent the money and I couldn't do it. I failed."

Now the rate of success is much higher, a fact Abdul-Ahad attributes to the rise of social media as well as to innovative approaches by a highly-mobilized new generation, who learned to organize during the Arab Spring.

Smugglers don't want "freelance" migrants crossing their paths, and jeopardizing their income. But they have little choice at the moment, because the old system has collapsed. Abdul-Ahad says shadowy networks still have a corner on the market for "high-end" immigration. In Baghdad, he met a  Swedish-Iraqi smuggler called Nabil who offered him a Schengen visa for $18,000. Or, for $40,000 Nabil said he would arrange marriage to a Swedish woman.

Few can afford those "first-class" options. And Abdul-Ahad says despite the risks of a sea journey, if he was stuck in Iraq today without papers he wouldn't hesitate to join the exodus via boat.

"If I was in my situation now, with this route, I would be the first to cross the sea," he says. "You would do it, I would do it, everyone would do it because there is no hope here."