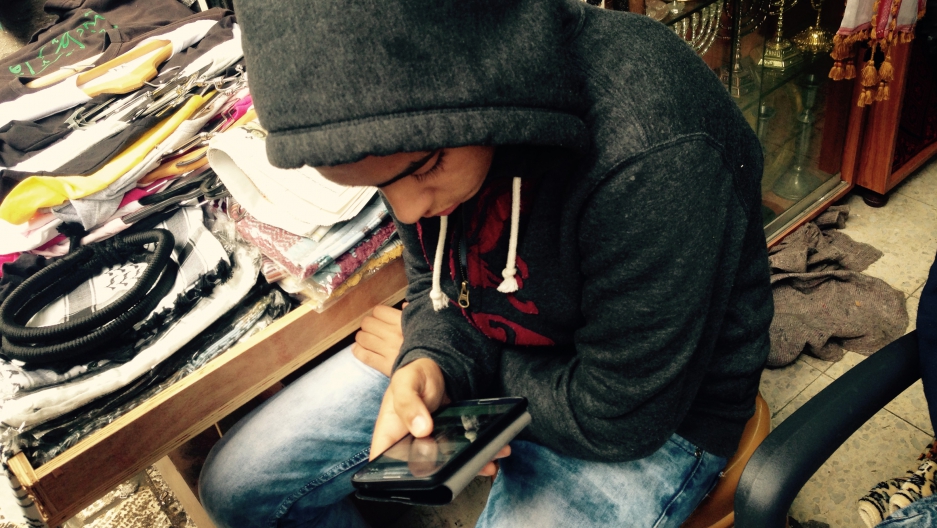 A Palestinian teenager checks his Facebook account, keeping tabs on the back and forth violence between Palestinians and Israelis.

A wave of violence has erupted between Israelis and Palestinians, and there are concerns that the unrest could escalate further.

The pretext for the renewed violence is competing claims to Jerusalem’s most sensitive holy site — the Noble Sanctuary for Muslims and Temple Mount for Jews. In this conflict, social media is used by Israelis and Palestinians as armor and ammo.

Today, I visited the contested holy site in Jerusalem’s Old City with Gilad Hadari, a religious Jewish activist who visits the site every day as part of a campaign to allow Jews to pray there.

He had a Go Pro video camera strapped around his torso to document any harassment by Muslim activists or Israeli police.

His Go Pro camera films Muslim women shouting religious slogans of protest, and some of them film us, too.

Israeli police are on high alert, and have been placing restrictions on journalists visiting the site. I came as a visitor.

A policeman warned me not to do anything resembling Jewish prayer — no singing or mumbling prayers which police fear could spark violence. 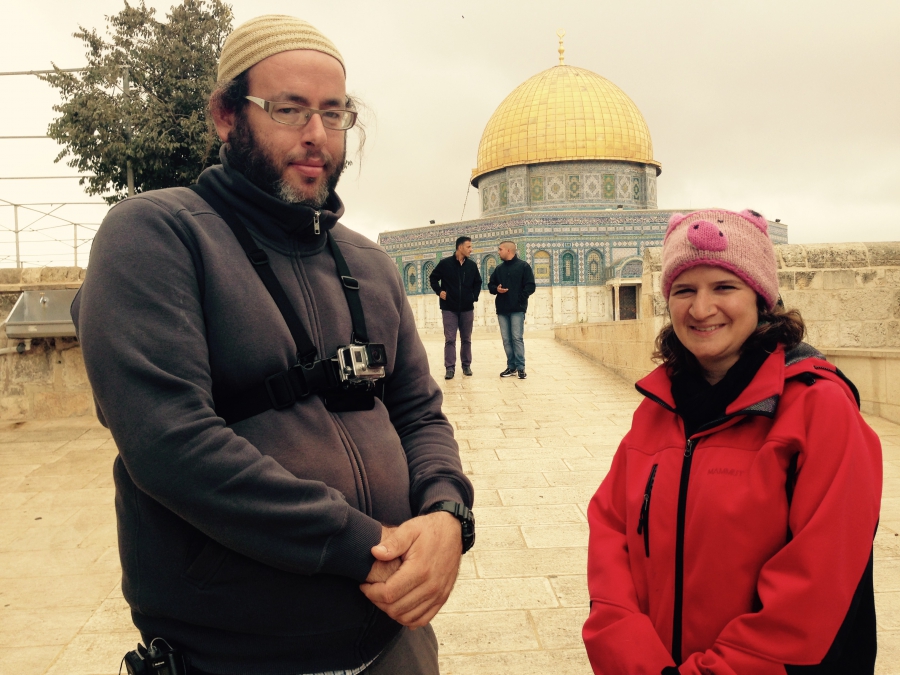 Gilad Hadari, a religious Jewish activist, and Hadassah Lev visit the Temple Mount as part of a campaign to allow Jews to pray there.

The minute we stepped out of the compound, though, Hadari began to sing a Jewish song: “May the temple be rebuilt.” That would mean building a Jewish temple where the Muslim Dome of the Rock shrine stands today. Muslims interpret that sentiment as a call to war.

Rebuilding the temple will come when the Messiah comes, Hadari believes. Until that day, he focuses on social media.

When he sees videos of scuffles, he shares the link on Facebook and with the four Temple Mount themed groups he belongs to on the messaging service WhatsApp.

He said he once saw his own photo on a Palestinian Facebook page with a circle and an X over his face, which he considered a death threat.

When we left the holy site, he began to type out a status report of his visit to share with his social media groups.

Then, even before ambulance sirens began to wail, his phone began pinging with word of a nearby stabbing. An 18-year-old Palestinian woman stabbed an Israeli who was carrying a gun and shot her.

Hadari, who is a medic, rushed to the scene.

It’s not long before a video taken right after the attack begins showing up on Facebook. Along the streets of the Old City, young Palestinians were glued to their cell phones, watching videos of various flashpoints of violence as they unfolded.

Walid Toufaha, 20, sat in a souvenir shop, watching a video of people rushing down a cobblestone alleyway as a girl screams. He said it was the Palestinian woman screaming after she was shot. He said he believes she was innocent.

Sitting next to him was a 16-year-old boy who thumbed through his Facebook feed to a gruesome photo of a Palestinian man, bloodied on the floor, shot dead by police in southern Israel. Police say he stabbed an Israeli.

The Islamic militant group Hamas appears to be banking that bloody videos will inspire Palestinians to violent action against Israelis. Hamas produced a video circulating on social media showing a Palestinian slitting a religious Jew’s throat, and then that Palestinian being shot dead as a martyr in what the video calls “defending the Al-Aqsa mosque,” located at the sensitive holy site.

Netanyahu has vowed to uphold the status quo. Hadari, the Jewish activist, said what matters most is not the “status quo,” but the “status update” on Facebook.

Jewish activists like him use Facebook to call on big groups of Jews to visit the Temple Mount. Masses show up, and police escort them in bigger groups than usual.

New precedents are set, and they’re set thanks to his activism on Facebook.