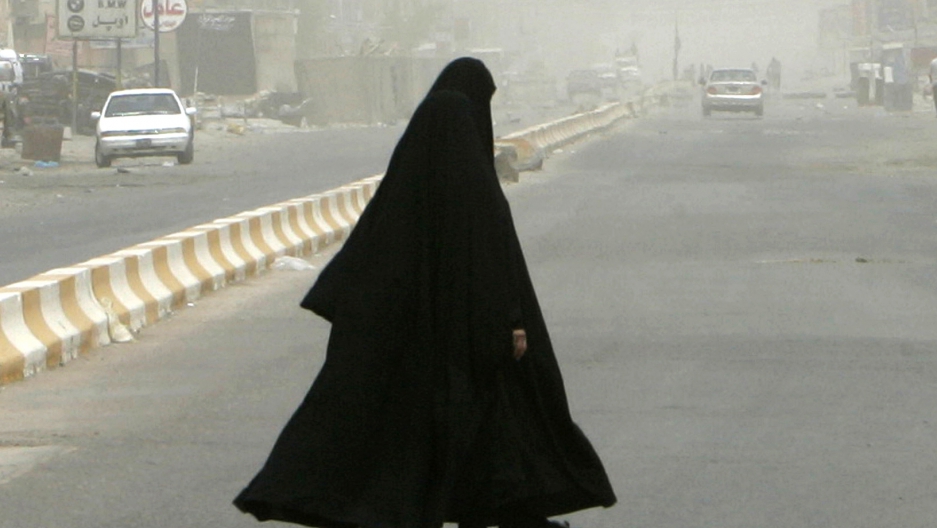 Women walk on a quiet and haze-covered street in the Amil district of Baghdad, July 8, 2007.

They are called "the forgotten layer" of the Iraqi society.

They are women who work in the sex trade. Some have chosen this work voluntarily but others have been lured in.

"[They're] mainly women and girls who don't have the support of their families," says reporter Rania Abouzeid, who has written about the sex trade world in Iraq for the New Yorker. "[It's] either because they are fleeing from their families because of some sort of domestic abuse or they've been displaced and their usual family network isn't around them."

Abouzeid reports about the way young women and girls are lured in the sex trafficking work, given free food and lodging and a sense of stability.

She writes in the New Yorker:

In 2012, Iraq passed its first law specifically against human trafficking, but the law is routinely ignored, and sexual crimes, including rape and forced prostitution, are common, women’s-rights groups say. Statistics are hard to come by, but in 2011, according to the latest Ministry of Planning report, a survey found that more than nine per cent of respondents between the ages of fifteen and fifty-four said they had been subjected to sexual violence. The real number is likely much higher, given the shame attached to reporting such crimes in a society where a family’s honor is often tied to the chastity of its women. The victims of these crimes are often considered outcasts and can be killed for “dishonoring” their family or their community.

But as dark as the sex trade world in Iraq is, Abouzeid writes about one very strong and brave woman. She calls her Layla for security reasons.

Layla is a former prostitute who was arrested and jailed. After her release, she decided to turn her life around.

"She just decided that this is enough," says Abouzeid.

Today, Layla sneaks into the underground sex world posing as a pimp or a former pimp. In Iraq, pimps are usually women. That's because they have better access to other women and can seem more trustworthy.

Layla enters this world and gathers information on women who are being abused or who are at risk. Sometimes she relays this information to authorities but mostly she tries to help these women herself.

She tips them about the limited shelters and safe houses that exist. This is extremely dangerous work. "These are criminal networks that are run by women but there are corrupt men behind them," Abouzeid explains."

Layla risks being caught, abused and even killed, but she tells Abouzeid that this is her calling. "She says that regardless of the dangers, she will continue with this until her last breath," says Abouzeid.