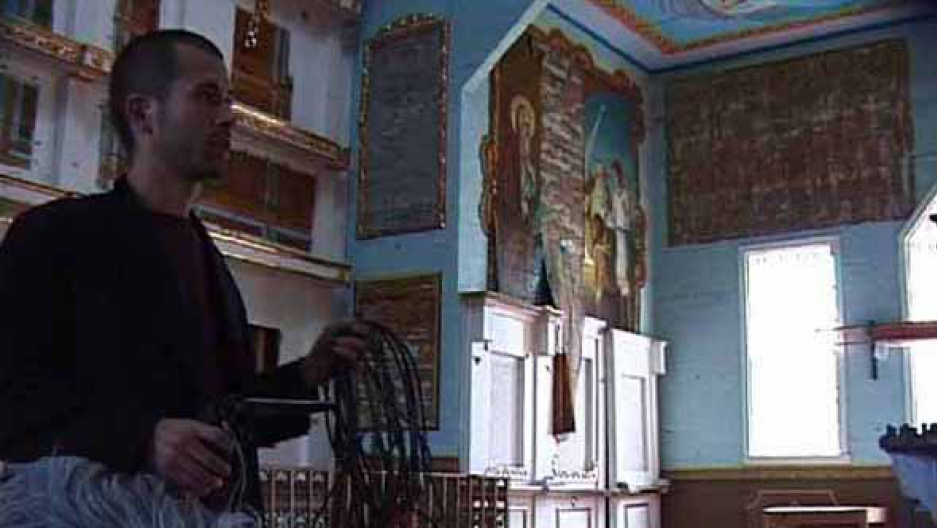 Jacob Kirkegaard recording in the Chernobyl exclusion zone: "It's a kind of a no place and so I thought: How can I record such a place because my presence ... changes so much?"

I assumed I had a lot in common with Danish sound artist Jacob Kirkegaard: I use microphones, he uses microphones. I love sound, he loves sound.

Kirkegaard uses accelerometers to record below the Earth’s surface, hydrophones to capture sound underwater and even tiny microphones to tape otoacoustic vibrations created by the human ear.

And he definitely loves sound a lot more than I do.

“I've never taken drugs myself, because I do think that sounds can take me high. I just always used sound to take me to places,” Kirkegaard says.

His journey began at age 6, when his father gave him a tape recorder and he discovered he could manipulate his voice by slowing it down: “And that made me sound like a monster all of a sudden. Like a big vampire.”

After college, Kirkegaard spent some time as a musician. Then one day he spontaneously put his ear to an iron fence in Cologne, Germany, and was plunged into a strange and oddly musical universe:

That’s when Kirkegaard realized that instead of making sounds, he’d rather find sounds “that mystify me somehow, that I don’t quite understand. It can be politically loaded places that I would like to listen to, without wanting to state an opinion.”

He spent a week in a small boat in the Ilulissat Icefjord in Greenland, recording glaciers calving. Here's: the soundtrack of global warming.

Kirkegaard advises: “Use headphones or good speakers.” He’s right: Even in a crowded café, I was transported to a place both forbidding and wild.

“Sometimes I think that it's not enough just to read about it or just to see a picture of a lot of ice on a glacier that has disappeared over some years. But if you hear it, you will start to feel that it's happening right now,” Kirkegaard says.

His work is also about what’s not happening now — in mostly forgotten places; for example, the town of Pripyat, in the heart of Chernobyl’s radioactive “exclusion zone.” Kirkegaard recorded there in 2005.

"People are really gone, and yet there are so many traces of life. It's kind of a no place and so I thought: How can I record such a place, because my presence is so — it changes so much?”

So he put his microphone down — and left.

After each take, he would record again, only this time playing the first recording back into the room at a low volume, turning silence into an orchestral drone.

But some sites are too stubborn to give up their secrets, as Kirkegaard found when he tried to record the concrete barrier that separates Israel from the West Bank

“It's so heavy, that it doesn't have much sound. But then I have to ask myself: What is it that I'm expecting anyway?” he says. “You know, the nature of that wall is exactly not to resonate with its surroundings. It is to stop any resonance. And that is something that when I start to understand this ... what it is that I'm recording.”

He ended up placing his microphones around the wall instead, capturing the sound of life-in-progress — a call to prayer, a car idling — sounds a wall can’t stop.

Not all of Kirkegaard’s work is a political commentary, and it’s not all done in solitude.  He once invited 16 different guests to the Hotel Marienbad in Berlin and then recorded them sleeping. There’s not much to hear — just an occasional groan, and some whispered sleep talk. But Kirkegaard says it’s kind of like diving into a world of the unknown.

“They give me a secret. They invite me to an intimate space of theirs that they don't even know about themselves.”

So what if I want to up my game, I ask Kirkegaard, from radio reporter to “Sound Artist.” Where I can find a good used accelerometer? But he tells me it's not about the fancy gear; it’s about your idea.

Another thing Agent Cooper once said: “I have no idea where this will lead … but I have a definite feeling that it will be a place both wonderful and strange.”