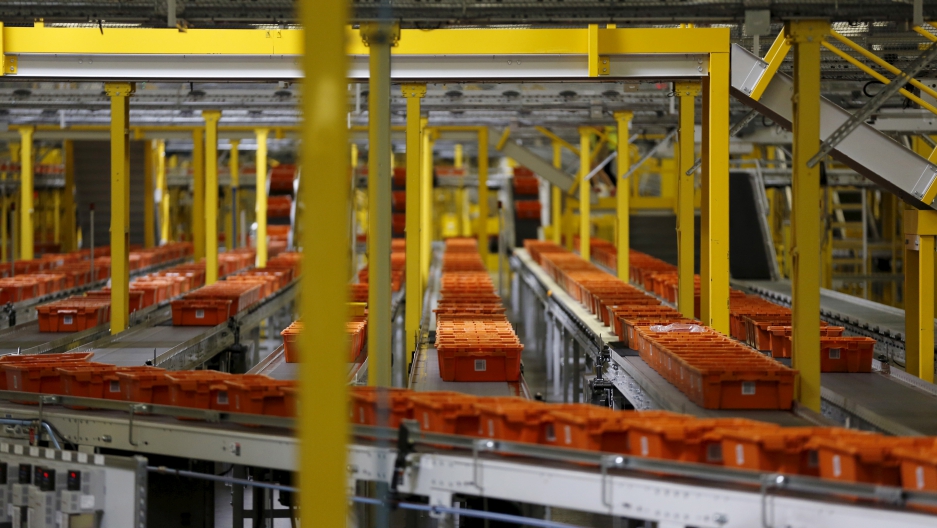 Products are moved on a conveyor system at an Amazon Fulfilment Center in Tracy, California. A texas teen tried to use Amazon to build a super PAC for Bernie Sanders

It turns out you can’t buy everything on Amazon after all.

The online retail giant is quashing an effort by a Texas teenager to use the company’s website to funnel cash into his newly formed pro-Bernie Sanders super PAC.

The Bern2016 super PAC was officially launched this week by 15-year-old Sebastian Burnham of Austin, Texas — a high school senior who cannot yet vote for his preferred candidate but is legally allowed to create a super PAC to advocate on Sanders’ behalf.

Super PACs can raise unlimited sums of money to advocate for or against federal politicians, although they cannot coordinate their spending with candidates. Conversely, the candidates themselves have virtually no control over these independent efforts.

Burnham, an active blogger who plans to study political science in college, says he wants to focus on raising money from grassroots givers — as Sanders himself has — and he thought he had developed a novel plan to do so.

Until recently, Burnham’s group stated on its website — ProgressivesForBernie.com — that pro-Sanders shoppers could use a specialized Amazon.com link to donate to the super PAC “for free.”

The idea was to have a percentage of every purchase made by users who were referred there by Bern2016 benefit the super PAC.

But Amazon.com isn’t on board.

“It has come to our attention that you are not in compliance with the Associates Program Operating Agreement,” Amazon.com wrote in an email to Burnham after questions from the Center for Public Integrity. “If you are not in compliance within five business days, we will be forced to terminate the Operating Agreement, close your Associates account and withhold advertising fees.”

In an emailed statement, Amazon.com spokesman Tom Cook said the company takes “the appropriate action” when it becomes “aware that an organization or company has violated the operating agreement.”

Burnham called the company’s decision a “setback” for his super PAC, adding that he had removed the specialized Amazon.com link but would continue searching for other similar programs that could be used.

He admitted it was “ironic” that he had launched a super PAC for a candidate who has disavowed super PAC support, but he argued that his group was different.

“I find nothing that Bernie has said that would inspire anyone to believe that our grassroots funding system is somehow unethical or unjustly sabotaging the electoral system,” Burnham said.

With whatever funds it raises, Burnham said his super PAC would produce flyers and online ads — including some praising Sanders’ “work on racial justice.” He said he was drawn to Sanders because of the U.S. senator’s support for policies that would aid the middle class and reduce poverty.

“One of the main problems with the Bernie Sanders campaign at this moment seems to be that large amounts of the electorate, especially among minorities, still have no idea who he is,” Burnham said.

“How much money we can raise, that’s up to the Bernie supporters visiting our website,” Burnham added. “We’re going to start small.”

Sanders campaign spokesman Michael Briggs did not immediately respond to a request for comment.

Earlier this summer, the Sanders campaign demanded that a separate super PAC curtail its activities, citing concerns that the group — called Americans Socially United and led by a man with a history of legal and financial problems — was "illegal and causing harmful confusion for supporters of Senator Sanders' campaign."

Currently, Amazon.com allows certain users to promote products and earn advertising fees — between 4 percent and 8.5 percent — through its “Associates” program, which Bern2016 unsuccessfully attempted to join.

The company’s AmazonSmile Foundation donates 0.5 percent of the price of eligible purchases to customers’ preferred nonprofits. The foundation gave out about $340,000 in 2013, the most recent year for which tax records are available.

Only charities organized under Sec. 501(c)(3) of the U.S. tax code — not super PACs — are eligible to participate.

“It would be illegal under the tax code for the AmazonSmile Foundation to go anywhere near this,” campaign finance attorney Cleta Mitchell told the Center for Public Integrity.

“It strikes me that this PAC is putting Amazon in a position of being the donor to the PAC,” she continued. “This is a crazy, illegal scheme — and Amazon would be nuts to participate in this because it could get them in trouble.”

In the past, the Federal Election Commission has approved programs that allow consumers to transfer a percentage of purchases — or even airline points — to political candidates and committees, where it was explicit that the money was coming from the individual, not the company involved.

Such programs must further collect contributor information — including name, address, employer and occupation — to comply with federal disclosure laws. They must also ensure that money from prohibited sources, such as foreign nationals and government contractors, is not donated.

Burnham’s system has not yet found a way to comply with those requirements.

Until recently, his super PAC’s website stated that its “commission-based system leaves no way to track donor information and as such would cause legal troubles for Bernie's spotless campaign.”

Burnham told the Center for Public Integrity that Bern2016 would “adopt” if “it was ruled that our system was somehow in violation of FEC norms.”

Paul Ryan, a lawyer at the nonpartisan Campaign Legal Center, called Burnham’s idea a “cutting edge program” but stressed that all super PACs must track donor information and comply with other rules.

“If I were the super PAC’s lawyer, I would have gone to the FEC for an advisory opinion before launching this fundraising strategy,” Ryan said.

This report was originally published by The Center for Public Integrity.