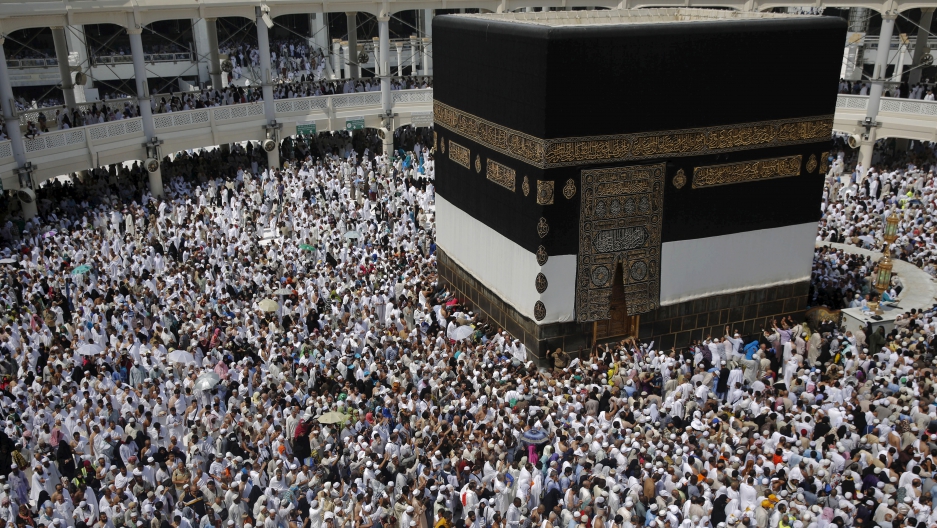 Muslim pilgrims pray around the holy Kaaba at the Grand Mosque ahead of the annual Hajj pilgrimage in Mecca.

The news from Mecca in Saudi Arabia is mind-boggling. More than 700 people dead — crushed in a stampede Thursday at the annual Hajj.

These were people who had come from all over the world for this pilgrimage to Islam's most sacred city.

“I have a few friends there at the moment,” says Farhan Khalid. “And unfortunately we can’t get in contact with them … so it’s just a waiting game at the moment, waiting to hear some official news.”

Khalid is spokesman for the Association of British Hujjaj, which gives practical advice to Muslims planning to make the Hajj.

Khalid says almost all pilgrims put a lot off effort into preparing themselves spiritually, but too many neglect the health and safety aspects of the trip. “There are 2-3 million people converged in one place. It’s the biggest gathering of people anywhere on the face of this Earth. You need to be aware of the health and safety implications of things before you go.”

At the Hajj, you can see people from over 180 countries in this one place and pilgrams are in close contact with so many different people, that there are issues with health Khalid says. "Communicable diseases can be passed from one person to another. So you need to get all your vaccinations.” There are also problems with the heat, dehydration and simple exhaustion.

Khalid says part to the advice the Association of British Hujjaj gives to pilgrims is on how to reduce the risk from crushing and stampedes. “Everyone from the western world, the US and UK, goes in a group. So you go in your group of 20-30 people, and you have your tour guide in front of you. And this guide will tell you exactly when to move, and which lanes to use … What people need to make sure they’re doing is following their tour guide and they’re listening to the instruction of what’s going on.” One other important piece of advice is simply to go slow, hold back and be patient.

Khalid says another issue on the Hajj is the excitement pilgrims feel, and enthusiasm to perform the different religious duties. So this can lead to pushing and shoving.

The deaths and difficulties will not deter pilgrims, though, says Khalid. “If you look at it from the perspective of a Muslim, the Hajj is one of the most spiritual experiences they will ever have. But this sort of tragedy has unfortunately happened before at the Hajj.

And this time around, it is still unclear what happened to spark the stampede that tragically ended so many lives.

But if you look back at stampedes in the past it wasn't religious fervor or excitement that incited things.

“The crowd at the Hajj is not a crowd of hooligans or bargain shoppers, it’s actually overall a well behaved crowd," says Amanda Ripley, the author of "The Unthinkable: Who Survives When Disaster Strikes and Why."

“There’s a certain intentional harmony of that crowd. So it’s actually, if anything, calmer and more cooperative because of the religious nature of the event,” says Ripley.

What happens in a stampede situation, according to Ripley, is simply a matter of physics.

“Most of these terrible tragedies are a function of too many people moving through too small of a space,” she says. “We’ve seen it on every continent. We’ve seen it at soccer games, at night clubs here in the US, and we’ve seen it very often unfortunately at the Hajj and it is almost always a problem of crowd management of crowd communication.”

This is what happened in 1990 at another tragic crowd crushing during the Hajj. A railing broke and people fell but nobody communicated that to the back of the crowd.

“So [the crowd] just keep pushing forward. The compounded force of other humans is like a trash compactor and that’s how most people die in these events. It’s through asphyxiation,” says Ripley, “You can die in a crowd crush without ever falling down.”

The Saudis have made concerted efforts to address crowd control and crowd management at the Hajj in the years after that horrible tragedy of the ‘90s but with more than three million pilgrims in transit each year, it’s an incredibly complicated challenge.

“The Saudis have to their credit in the past decade invested a lot of time and money to make it safer. So we don’t know what went wrong here,” says Ripley.

So what can you do if you find yourself in a dense crowd and you start to feel the beginnings of a stampede? — Ripley has some advice.

“One sign of danger is the sensation of being touched on all four sides.  That’s definitely the time to work your way to the margin of the crowd,” says Ripley.

Then she says gradually move sideways and backwards outside of the human flow.