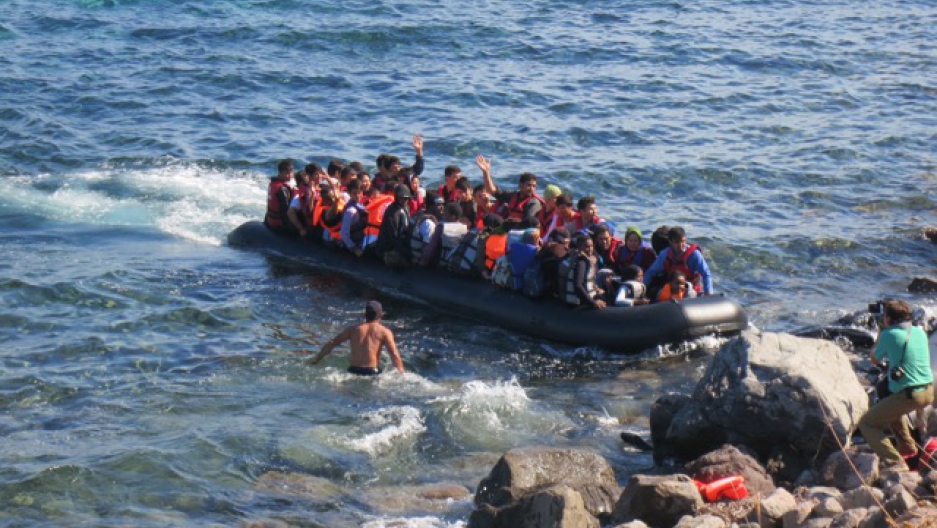 Today I joined the pack of volunteers and media awaiting the arrival of refugee boats to the Greek island of Lesbos from Turkey — just a few miles away across the Aegean Sea.

My companions from the BBC and I had coffee in the picturesque fishing village of Sykaminia. An old Greek man with a bushy mustache sat on the dock slowly rinsing sand out of a freshly caught squid.

The stretch of coast on Lesbos where the biggest wave of refugees since World War II has been coming ashore is a rugged, mountainous landscape of steep olive groves and oaks dotted with small villages.

It’s easy to feel that here the time machine got jammed back around the beginning of the last century, until you look down the rocky shore and see that it is littered with the carcasses of destroyed inflatable boats and immense piles of hundreds of brightly colored life jackets left behind by refugees. 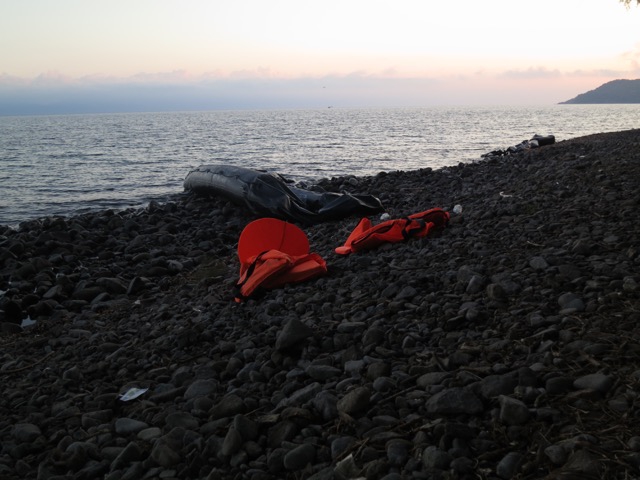 Debris on the shore in Lesvos.

On Wednesday, 2,500 refugees arrived. On Thursday, around 1,200. Some 35,000 arrived in the month of August alone — just on Lesbos, not counting those who traveled to Kos or other islands or passed through northern Greece by land into the Balkans. How many would arrive today?

The photographers who had been shooting this historic event for weeks, even months, scanned the horizon with binoculars. A Frontex helicopter buzzed the Turkish coast. Two Greek coast guard vessels passed. Could it be that no boats would come? We speculated about increased security, or a shortage of boats.

Then the senior Greek photographer in the bunch spotted a tiny orange patch on the far horizon.  He called his buddy stationed up on the mountain and soon told us with confidence that one boat would arrive in 20 minutes. He knew. His photos are regularly seen around the world.

We rushed down the road.   We were mostly photographers and video crews. I had my notebook and audio equipment. And volunteers from many countries in green vests or bright t-shirts hurried to ready bottles of water and emergency foil blankets.

In some ways, it wasn’t as dramatic as I was expecting. It was a lovely, benign morning with gentle sea breezes. But then the boat came, a flimsy large black inflatable boat stuffed with people like the New York subway at rush hour.  It hit the rocks and a cry of relief rose up and people rushed down, some snapping photos, others reaching out hands to help.

Suddenly we were standing among 40 or so people from Afghanistan and Somalia wet to their thighs and clutching their belongings.  Children were held high, set on solid ground.  What do you say?  Welcome to Greece?  Welcome to Europe?  The Somali women wore Hijabs that covered most of their faces.  We exchanged glances but they didn’t want to talk, not that I spoke their language.

I didn’t interview anyone from this group but earlier I had spoken to an articulate 19-year-old Iranian man who had been sent with his family’s life savings to find a better life.  He wanted to go to Sweden and study to be a doctor. I also spoke with an Afghani boy of 16 who was also alone and planned to go to Germany, “god willing the United Nations will help me.” Both carried the gift and the burden of their parents’ high hopes for them in their eyes.

I thought about what was ahead of them; they had traveled so far already. The volunteers would point them up the steep 4 km road to the spot where, hopefully, buses would be waiting; if not, they would walk the 60 km back to the refugee camps near Mytilene. Then there would be many, many more borders to cross.

I watched as a young Afghan man in a Rolling Stone t-shirt carefully extracted his mobile phone from the layers of plastic wrap he had put on it for protection on the sea crossing. He pushed the power button and the phone turned on. He smiled and took a selfie of himself and the empty boat. I smiled with him. 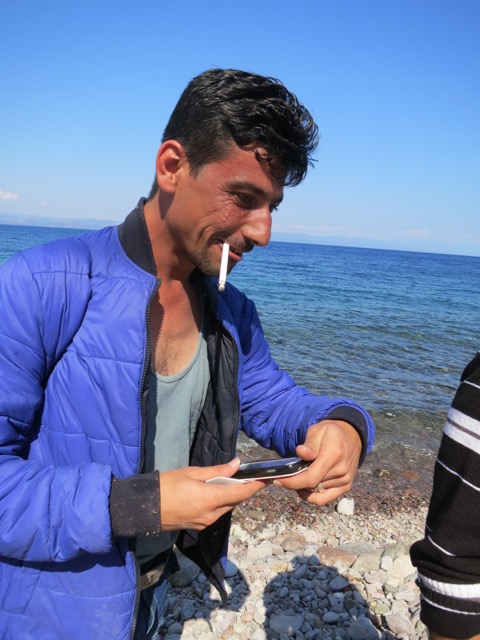 A young refugee on shore in Lesvos.

Then we drove north where another boat was about to come ashore.