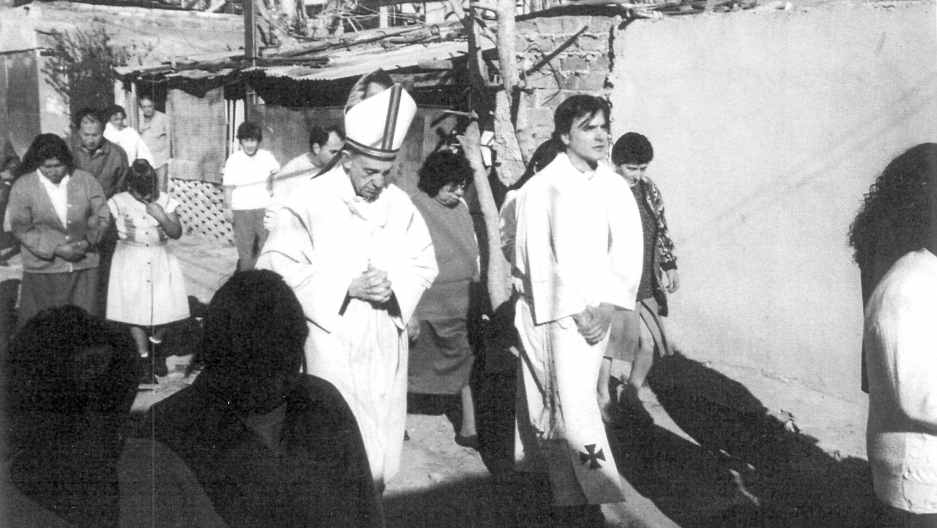 Pope Francis can do no wrong for many in the cheering crowds that lined the streets around the White House today.

But the pontiff says otherwise.

He's acknowledged that he made "hundreds of errors" when he directed Argentina's Jesuit Order in the mid-1970s, in the lead up to the country's Dirty War.

Author Paul Vallely says Pope Francis argues that he made mistakes during that turbulent period because he'd been "put into the job too early."

"He said he was too young, too inexperienced, too authoritarian, people said he was an ultra-conservative because of the way he behaved," says Vallely, author of Pope Francis: The Struggle for the Soul of Catholicism. "He regretted that."

Most Argentines agree that the Catholic church was complicit in military abuse during that era of dictatorship, in which up to 30,000 people, known as the disappeared, were kidnapped and presumed killed. Back then, Pope Francis was Jorge Mario Bergoglio, an opponent of Liberation Theology, a doctrine that embraced the poor and social change.

At that time two of the Jesuits in Bergoglio's order — his former philosophy and theology teachers — were determined to live and work among the poor in the capital's slums. Bergoglio "locked horns" with the men, according to Vallely, and demanded that they return to the Jesuit headquarters. When they refused, he ejected them from the order. That led the Archbishop of Buenos Aires to withdraw the two Jesuits' licenses to say Mass.

"The military looked at this and said 'these men have been tossed aside by their own order and by the hierarchy of the church, they're obviously subversives,'" Vallely says. "They went in and picked them up, hooded them and shackled them, and tortured them ... There was a lot of ill feeling in the Jesuits that he'd let these men down."

In one of the few interviews Bergoglio gave as an Archbishop of Buenos Aires, he expressed remorse for not doing more support the victims of abuse during the Dirty War.

Four decades later, for many Argentines, Pope Francis's actions during the Dirty War are a "non-issue," according to the BBC's Veronica Smink in Buenos Aires.

"There is a sense that as with many other people during that time, probably they could have done more, but there's also the acknowledgement that he wasn't very high up in the hierarchy of the church," Smink says. "There's a big difference between regretting not doing more and being part of wrongdoing."

And more details of church's role in that dark era may emerge soon.

Last spring, the pope ordered the Vatican to open its own archives on Argentina's Dirty War.