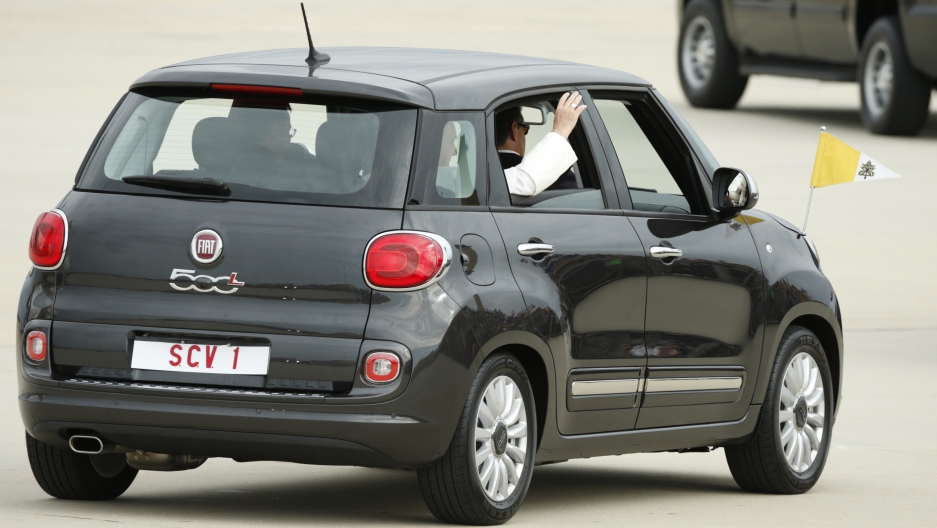 Pope Francis waves as he departs Joint Base Andrews, Maryland, in a Fiat 500 after arriving for his first trip to the United States.

Pope Francis is in America. He arrived at Joint Base Andrews outside Washington Tuesday, on an Alitalia flight from Cuba. Waiting for him on the ramp wasn't an elaborate limosuine or even the trademark Popemobile, but rather a humble 2015 Fiat 500L, on lone from the Vatican's Apostolic Nunciature (essentially the Vatican's embassy in the US).

The vehicle also took him to the White House Wednesday morning to meet with President Barack Obama. But later, he started touring the nation's capital in the 2015 incarnation of the Popemobile: a custom-made, open-sided white, Jeep Wrangler.

The pope has come a long way from the days when he was carted around town on a sedan chair carried on the shoulders of a dozen loyal servants. In the 19th century, a gilded horse and carriage was the thing. Horsepower — of the four-legged kind — was the preferred mode of transportation into the 1920s.

“The first car was actually given to the Pope in 1909,” says Emily Rueb, who put together a special feature on papal transportation for the New York Times. “And it was given by the archbishop of New York. But he turned it down. He wasn’t ready for motor transportation.” 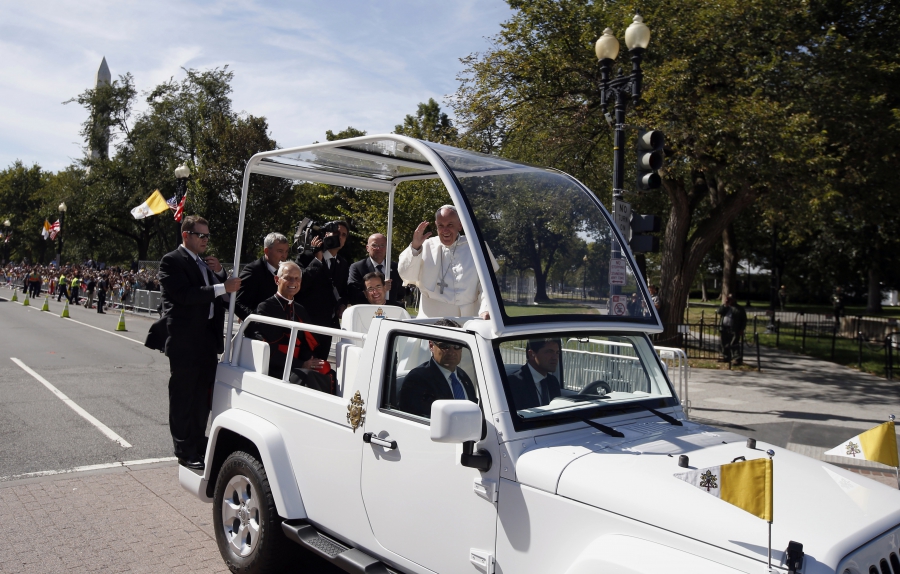 Pope Francis waves from the popemobile during a papal parade in Washington September 23, 2015. Pope Francis is making his first visit to the United States.

“So it wasn’t really until 1929,” adds Rueb, “when Pope Pius XI received another car, by Detroit-based auto-maker Graham-Paige, and that was sort of the beginning of motorized Papal transportation.”

The big changes came in the 1950s, when popes started to travel internationally, starting with John XXIII. He had the first car with an elevated throne seat at the back of an open-top car: a Mercedes-Benz 300D.

“But what’s more recognizable for us as the Popemobile,” says Rueb, ”are these all-terrain vehicles that started appearing in the 1970s, and that was with Pope Paul VI.”

Paul was first pope to fly, and the first to leave Europe.

“It was really a response,” adds Rueb, “to the need for the Catholic Church to respond to its larger audiences. When the pope started traveling internationally and holding large processionals through the streets, especially here in New York and other cities around the world, vehicle makers and the Vatican needed to create cars that would allow the Pope to drive through the streets, wave to his people, creating more of the Popemobile experience we think of today where you see the Pope standing in the back and waving.”

But it was under Pope John Paul II that the Popemobile came into a form we would recognize today. He was famously shot and injured while riding in a white 1980 Fiat 1107-Nuova Campagnola. After that, the pope was typically encased in bullet-proof glass.

But Francis has ended that tradition. The Wrangler he’s riding in through Washington is open on three sides. Francis says he does not like being inside what he calls a ‘sardine can.’