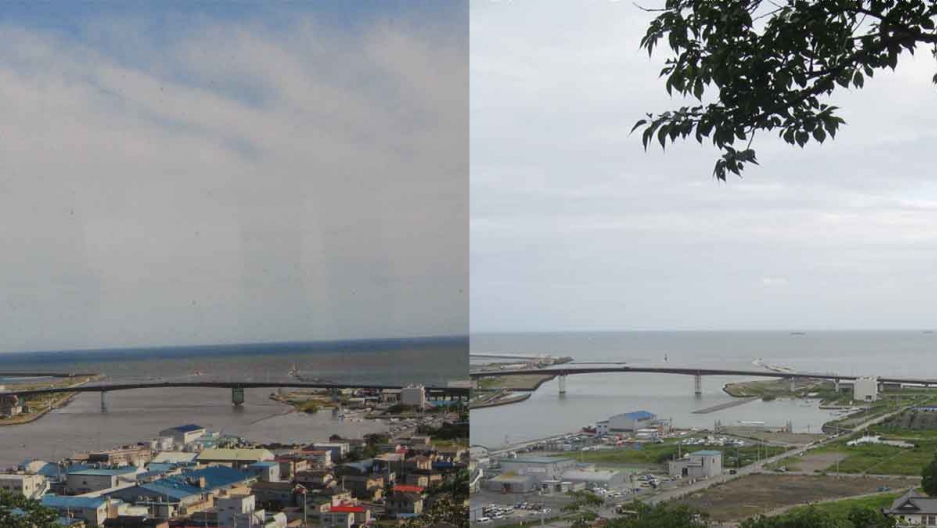 The coastal Japanese city of Ishinomaki, before the Tsunami... and today.

When the disaster hit, 67-year old Ryohei Tokumasu was in his car driving to his office. On his way down the mountain he says he had to stop because there was a house lying in the middle of the road. He couldn't go any further.

He parked his car, got out, and went to see if his office were even visible, if it had survived. But everything was buried in water. "And all the buildings that had been there were smashed against the bottom of the mountain," he says.

Over time, fires started to break out, and despite the water Tokumasu says the town burned all night. 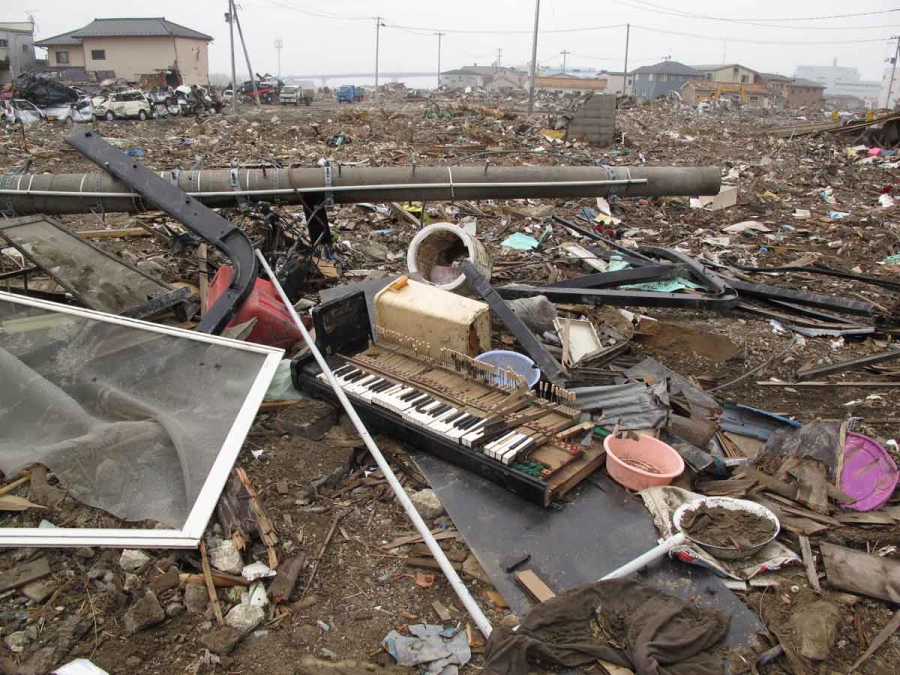 Ishinomaki, Japan after the 2011 earthquake and tsunami.

Tokumasu had been planning to drive to Tokyo the next day to fly out of the country. His bags were packed with extra clothes, and his car had a full tank of gas. That night he slept in his car. The next morning, driving around was kind of surreal.

“The town was completely divided in half, into heaven and hell,” he says.

Tokumasu added that on one side was a scene of utter devastation, but just across the street, it was is if nothing had happened. On the one side, people who’d lost everything were simply staring vacantly out at the ocean; on the other, people were out just casually walking their dogs.

That’s what Tokumasu describes as the real cruelty of the tsunami. 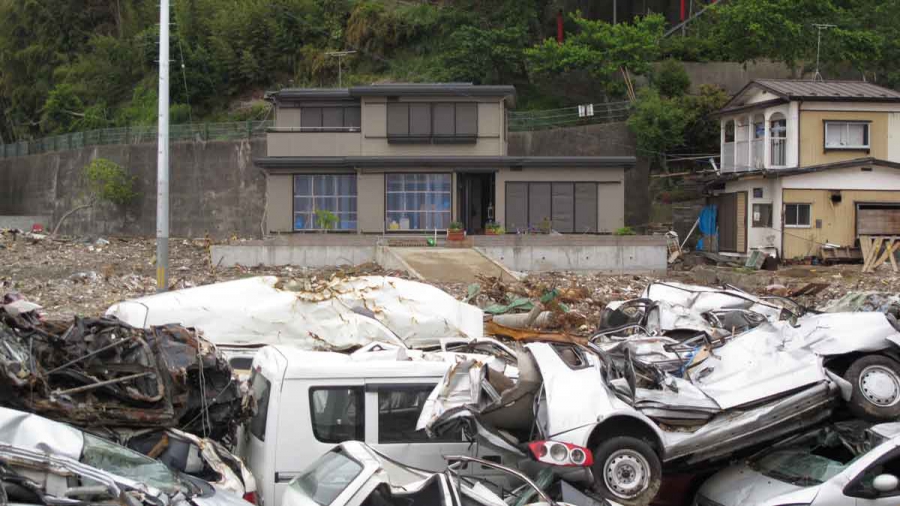 A house in Ishinomaki, Japan largely undamaged after the earthquake and tsunami in 2011.

Tokumasu was born and raised in Ishinomaki, but he has a bit of a different relationship with the ocean than a lot of people in town.

He’s a diver. He teaches diving lessons, rents people gear and also does ocean survey work for companies and the government.

In the storm, though, he lost everything: his house, his office and his equipment. But his family survived and so did his team.

And pretty much right away he started reaching out and also getting phone calls from friends and people he worked with around the country.

“They’d say, 'are you OK?' And I said, 'the people are fine. But we have nothing, and we need to start search and recovery.' And they said, 'we have all this equipment, we'll send it to you,'” Tokumasu says.

So amidst the chaos that followed the triple disaster, he started receiving diving gear, ships and cranes from all over Japan. When it couldn’t be sent, sometimes people strapped it into cars and brought it directly.

Four days after the disaster, Tokumasu and his team got to work, locating and clearing sunken debris in the waters around Ishinomaki: ships, ropes, cars, backpacks and even recovering the bodies of people who’d been swept away.

For nine months, Tokumasu did only volunteer work. He says he was only able to do what he did because of how amazing other people were. He describes someone who lent him land for a temporary office and refused rent. Or the people who sent him equipment — which although they didn't ask, he eventually paid back every penny of.

In the aftermath, he says he realized that "even in a tsunami or earthquake, your relationships with your friends ... those don’t disappear. Even if buildings disappear, if you have your friends, that’s your most important possession.”

Marco Werman: The tiny item I kept amid a sea of destruction

In the tsunami, Tokumasu says all sorts of things got washed into different places. He never recovered anything from his house, but a stack of his old passports somehow ended up at the police station. Marco Werman, host of The World, went to Japan after the earthquake and tsunami in 2011. While there, he found a "hanko," or a name stamp. It’s what people use for their signatures in Japan. But he never knew it was Tokumasu's — until now.

Tokumasu says Marco finding his hanko doesn’t shock him. But because of that hanko, we’re able to share Tokumasu and Ishinomaki’s story. 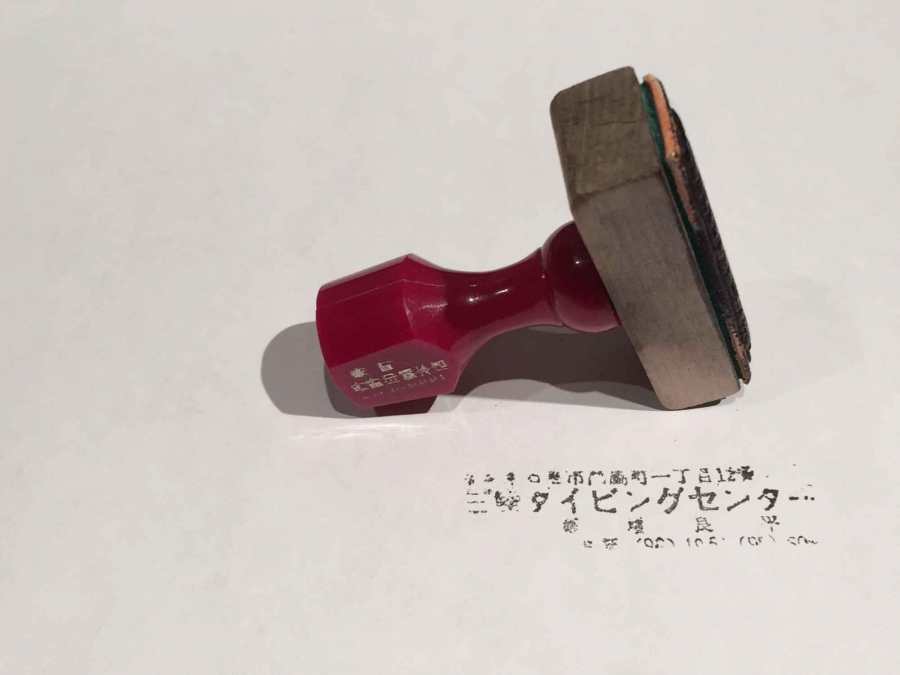 Stamp found in Ishinomaki, Japan following the earthquake and tsunami on March 11, 2011.

“The fact that someone from Boston came here after the tsunami ... more than just seeing it on TV or the Internet, he really felt and saw the reality of what we went through ... I’m very thankful," he says.

Four years on, Ishinomaki is being rebuilt — just very slowly. What used to be some of the most populated areas are now off-limits to residential building. And almost 20,000 people still live in some kind of temporary or transitional housing.

Tokumasu thinks it’s been too long: If this is the way it looks now then it's probably the way it’ll look in the future. And, he says, some people have moved on, for jobs that disappeared and some because they literally just don't want to see the ocean any more.

After we talk in his office, Tokumasu offers to show me around Ishinomaki. He takes me up the mountain to get a view of what seems like mostly green fields near a calm sea. But those green fields are where houses and buildings and factories of Ishinomaki used to be.

Although Tokumasu’s family and companies survived, he did lose people close to him: friends and someone who was like his little brother.

He says it’s childish, but for two months after the disaster, there was one thing he couldn’t get out of his head. And he says he actually went and shouted from the mountaintop, "Idiot tsunami! ... Give me back my friends!"

Tokumasu partly laughs as he tells me this.