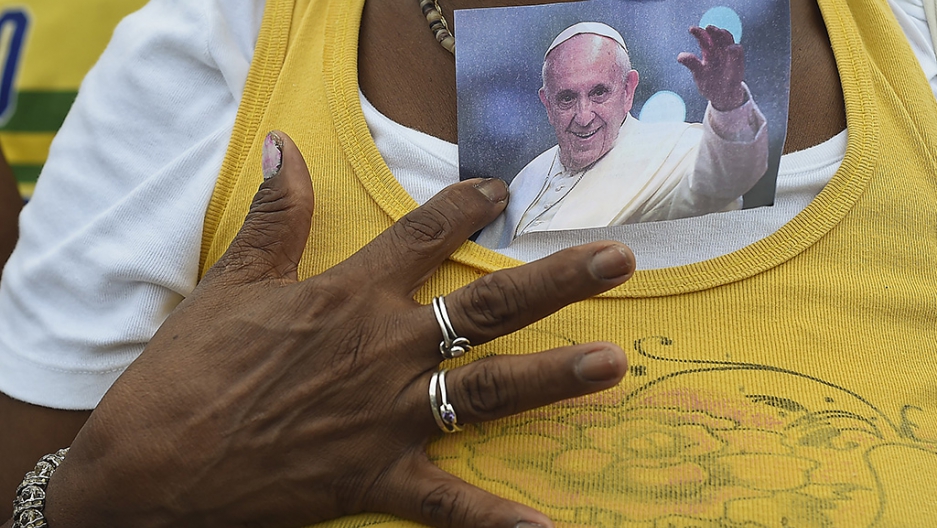 HAVANA, Cuba — Pope Francis is on a religious, perhaps political, mission in Cuba this week — though a higher power may be in order for the sweeping changes he wants to see.

Francis’ trip to the Americas — his first time in Cuba or the United States — comes months after he secretly advocated for renewed diplomatic ties between the countries.

At his welcome speech at the Havana airport Saturday, the Argentine pope praised this year's normalization of diplomatic relations. "I urge political leaders to persevere on this path and to develop all its potentialities ... as an example of reconciliation for the entire world," he said.

Why such the interest in a Caribbean island and its neighborly relations?

Francis is not the first globe-trotting pope to exercise political interventionism in the name of peace and the Catholic Church.

In 1998, John Paul II became the first pope to visit Cuba. In an address to more than one million in Plaza de la Revolución, he said, “Let Cuba open itself to the world, and let the world open itself to Cuba.”

Father Marquez, a parish priest in Cuba, cited studies that show 60 percent of practicing Catholics in Cuba joined the church after that visit by John Paul. Cuba's President Raul Castro walks with Pope Francis after his arrival at Jose Marti International Airport on Sept. 19, 2015 in Havana.

Francis will lead an outdoor mass in the same square, and visit two other cities in eastern Cuba, as well as meet Fidel and Raúl Castro.

What’s uncertain is what he will say about religious freedom in Cuba and the US embargo.

After the 1998 visit, Pope Francis, then Bishop Jorge Borgolio, wrote a booklet entitled, “Dialogues between John Paul II and Fidel Castro,” in which he called for liberalization of Cuban politics. He seems unlikely to bring this up in front of Raúl, however — which could anger Catholics looking for as hard a stance against Cuban communism as he has taken against capitalism and trickle-down economics.

Average Cubans and the American pope

The current pope is miraculously popular on the island — with an approval rating around 80 percent — even though the Catholic faith is not as widely practiced as it once was in Cuba. An estimated 60 percent of Cuba's 11 million people are baptized Catholic, the church says, but fewer than 5 percent attend church.

Just weeks before the announcement that Francis would stopover in Cuba from Sept. 19-22, prior to his planned visit to the US, Cubans didn’t seem to think the first pope from the Americas would visit the island.

“I don’t think he’ll come,” said Father Marquez, whose name has been changed upon his request.

Until the 1980s, Cuba was a place where explicit religious practice was frowned upon. The state still exercises some influence — setting quotas for the number of priests on the island, and not allowing private religious schools — but in general, religious individuals are freer now than they were before to practice on an island with diverse faiths.

Today, most Cubans are agnostic, and one of the fastest growing faiths is Santería, a blend of African faiths that incorporates Catholic terminology and traditions.

A pope and a Castro embrace

In 1998, Fidel Castro took to the TV to announce the impending visit of John Paul II, sometimes referred to as the traveling pope.

“It was probably one of the best introductions of the pope I’d ever heard,” says Father Marquez. “I went out to the street and asked a group of old people, ‘Up until yesterday they said the Church was against the state, and now?’”

Over time Christmas was made a national holiday once again, and parishioners felt safer to worship without fear of losing government jobs.

Francis’ follow-up visit is largely symbolic, like the raising of the US flag at the re-opened embassy in Havana on Aug. 14. Lasting change happens over many years, but such moments are remembered and used to exemplify the shifting relations between Cuba and the rest of the world.

Cuban-Americans angered by the pope’s intervention

Of course, Pope Francis has not been able to avoid making waves with his politically charged travels. Many Cuban-Americans, particularly those who oppose the Castro administration in Cuba, were angered by the pope’s involvement.

“Whereas the Church once brought the Cuban exiles together, it seems to now be tearing them apart," observed writer Alfredo Garcia in the online news journal, "Religion and Politics."

Funnily enough, religious visits have long been one of the 12 approved visa categories for Americans hoping to visit Cuba — and some 400,000 took advantage of one of those categories in 2014 alone. Perhaps more Americans will start visiting the island for religious reasons now that three popes have as well. Local leaders claim some of the biggest strides toward religious liberty have not been made by the drop-in of a pope but by patient appeals from Cubans themselves directly to the Castro government.

Adela Dworin, president of the Hebrew Community Center of Cuba, sits at her desk in the library under the Beth-Shalom Temple in Havana, sporting a white guyabera shirt. She oscillates between English and Spanish with a thick Cuban accent, eating her S’s in true Caribbean fashion.

Her office has framed pictures of her with Raúl Castro. In one, he sports a yamaka.

When Castro stormed the Presidential Palace on New Year’s Eve 1959 and quickly assumed power, the church was labeled anti-revolutionary.

Although Fidel Castro and his brother Raúl were raised Catholic and attended a Jesuit school, as young men they saw the church publicly oppose their work and ideals.

Outside groups, like the Roman Catholic Church and its political stances, fostered a sense that the two could not coexist.

Alonzo Duarte, who preferred not to have his name used, is a bilingual Baptist preacher. He argues that the newfound openness of the church started well before the pope’s visit.

“In the '90s, we had a period of economic crisis, and people started heading back to church," says Duarte. "The government had to give them something ... so it opened up more to the church.”

Duarte and other protestant church leaders petitioned the government directly in the early 1990s, asking for an apology for the treatment of churches, an apology which Duarte says they received.

Santería has a growing spate of local priests, but 70 percent of Catholic priests are foreigners — in part due to the lack of seminary students during the low-period of religious activities from the 1960s to the '90s.

José Diez, whose name has been changed per his request, is a Catholic congregant in Trinidad, Cuba.

In his 20s and newly married, Diez did not grow up with religion but converted because his wife was Catholic.

“I wasn’t baptized because my mom worked for the government and she might have had problems at work,” Diez says. “But now I go to church and it’s not a big deal.”

The churches in Cuba that have not been turned into museums or concert halls are nearly always closed save mass on Sunday.

Yet the island is enjoying a bit of a pluralistic religious renaissance, particularly with religions that have West African roots, like Santería or Yoruba. A Yoruba priest in Old Havana sets up for a blessing ritual in his home.

The Spanish who conquered Cuba in the early 1500s brought over Catholicism as well as more than one million slaves, who had their own religious practices from West Africa.

The African faiths have evolved since then, often hiding behind Catholic terminology to keep long-held traditions alive in the form of syncretized, or blended, religious practices.

Getting off the ferry in Regla, a factory town across the bay from Havana, you run into a diminutive Catholic church, the Church of our Lady of Regla.

The altar holds a statue of the Most Holy Virgin of Regla, a black-skinned Madonna, the patron of Havana Bay whose image was crowned by Cuba’s Cardinal in 1957. She is also symbolic of the African goddess of the oceans and patron saint of sailors, Yemayá. Many balseros, Cubans who make rafts out of balsa wood and attempt to sail to Florida, pray to the Virgin of Regla for protection on their 90-mile journey.

Angel Jimenez, who sells sandwiches and coffee at a café in Havana, is among the faithful Pope Francis hopes to bring back into the flock.

Jimenez is also studying to be a Yoruba priest.

“The [Yoruba] priests, all the people you meet, they’re all baptized [in the Catholic church],” he said. He sports a bracelet made of green and gold beads, the two colors representing peace and death.

According to Jimenez, many of the religious celebrations, especially those centered on the shared saints, attract practitioners of Catholicism and African religions alike.

“A lot of us [Yoruba practicing] go and sit there and listen to the [Catholic] priest, and we think it’s interesting,” he said, looking pensive.

Perhaps this is the thoughtful audience Francis will be preaching to in Cuba.

“There are different interpretations,” Jimenez said, reflecting the pluralistic attitude toward faith in Cuba. “It all starts with God, Olisha, at the top. Then come all of us.”