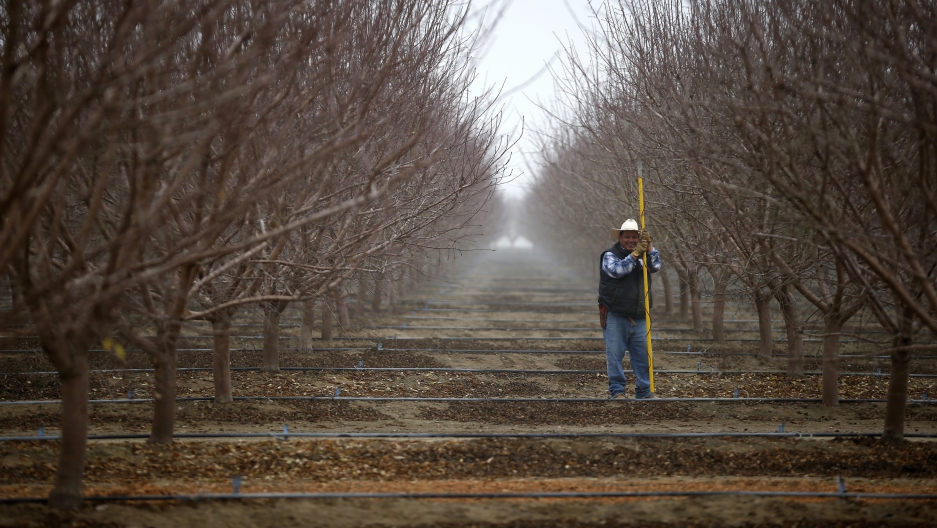 A worker prunes almond trees in the Central Valley, California. Like Saudi Arabia, California’s agriculture relies heavily on water pumped from the ground – accounting for about 65 percent of its water use during drought years.

A decade ago, reports began emerging of a strange occurrence in the Saudi Arabian desert. Ancient desert springs were drying up.

The springs fed the lush oases depicted in the Bible and Quran, and as the water disappeared, these verdant gardens of life were returning to sand.

“I remember flowing springs when I was a boy in the Eastern Province. Now all of these have dried up,” the head of the country’s Ministry of Water told The New York Times in 2003.

The springs had bubbled for thousands of years from a massive aquifer that lay underneath Saudi Arabia. Hydrologists calculated it was one of the world’s largest underground systems, holding as much groundwater as Lake Erie.

So farmers were puzzled as their wells dried, forcing them to drill ever deeper. They soon were drilling a mile down to continue tapping the water reserves that had transformed barren desert into rich irrigated fields, making Saudi Arabia the world’s sixth-largest exporter of wheat.A specially configured NASA satellite designed to identify and highlight vegetation captured these photos of the Wadi As-Sirhan Basin in northwest Saudi Arabia, showing how the Saudi desert blossomed into verdant fields by tapping underground aquifers buried more than a kilometer deep. Credit: NASA

But the bounty didn’t last. Today, Saudi Arabia’s agriculture is collapsing. It’s almost out of water. And the underlying cause doesn’t bode well for farmers in places like California’s Central Valley, where desert lands also are irrigated with groundwater that is increasingly in short supply.

So what what happened? And what can the United States, China and the rest of the world learn from Saudi Arabia?

The government allowed wealthy landowners to dry up its groundwater in just three decades.

Saudi Arabia’s mysteriously disappearing water came to light around the turn of the century. By 2002, the government even formed the Ministry of Water to search for answers. But the Sherlock Holmes of this story came from a surprising background.

Beginning in the late 1970s, Saudi landowners were given free rein to pump the aquifers so that they could transform the desert into irrigated fields. Saudi Arabia soon became one of the world’s premier wheat exporters.

By the 1990s, farmers were pumping an average of 5 trillion gallons a year. At that rate, it would take just 25 years to completely drain Lake Erie. 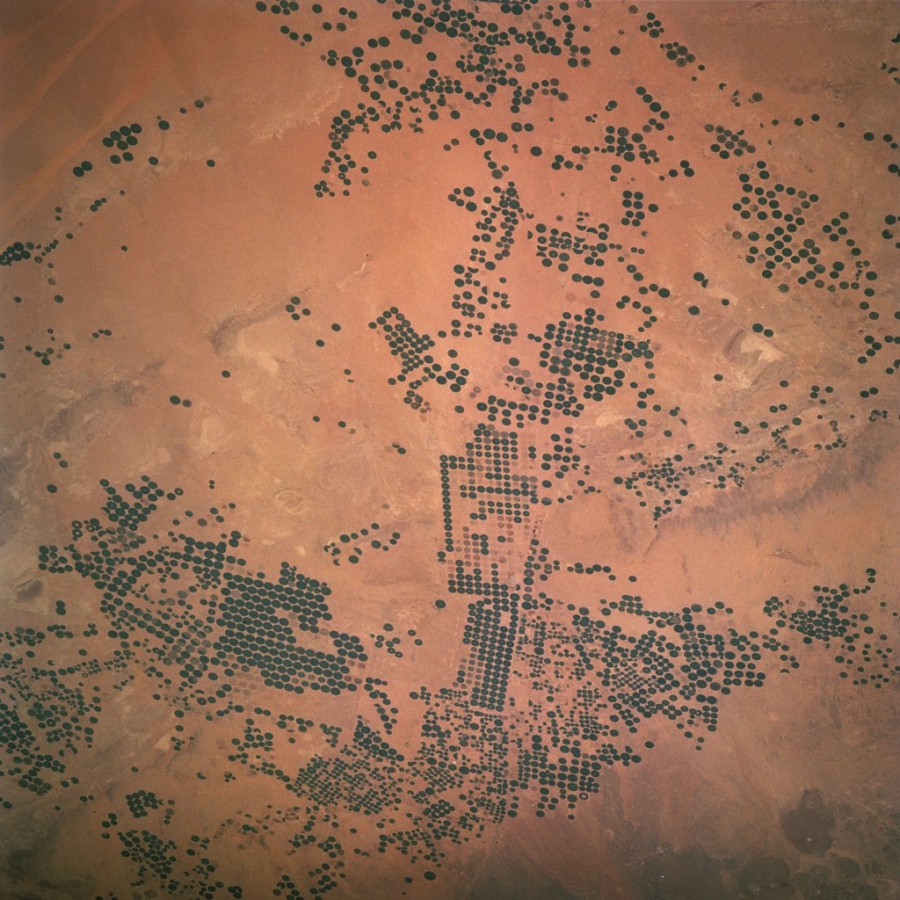 In Saudi Arabia, water is delivered to the crops from a central point in the middle of each field. This irrigation technique creates the distinctive circular shape of the fields, which in this photo – captured in 1997 from the US Space Shuttle Columbia – range in diameter from a quarter of a mile to as much as 2 miles.

The Saudi government’s policy largely enriched the ruling elite and resulted in a near total depletion of its precious aquifers, Elhadj wrote.

“A combination of money and water could make even a desert bloom, until either the money or the water runs out,” Elhadj said. For Saudi Arabia, it was the water.

Now the water is nearly gone. Most of that underground water came from ancient aquifers that are deeply buried and won’t naturally refill for tens of thousands of years.

In the historic town of Tayma, which was built atop a desert oasis mentioned several times in the Old Testament, researchers in 2011 found “most wells exsiccated.” That’s academic speak for “bone dry.” The once-verdant Tayma oasis that had sustained human life for millennia — archaeologists have found stone tablets there dating back 2,500 years — was drained in one generation.

A parched Saudi Arabia is bowing out of the wheat farming business.

The government announced next year’s wheat harvest will be the country’s last. The Saudis are drinking desalinated water from the ocean — a process too expensive to use for irrigating farmland.

Agricultural production is in a free fall. The country has less than half the farmland it did in the mid-1990s, according to the Food and Agriculture Organization of the United Nations. 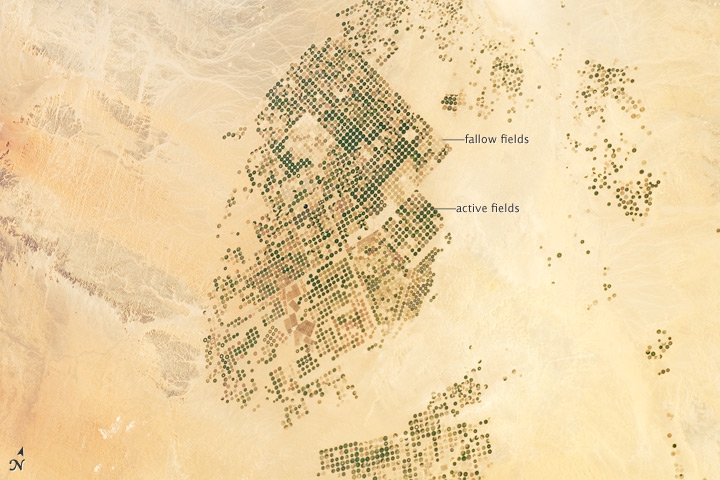 By the time astronauts aboard the International Space Station took this photo in 2012, Saudi Arabia had begun fallowing its fields. The agricultural fields in active use are dark green. Fallow fields are brown. Each field is approximately one kilometer in diameter.

Its fling as a major food exporter was nothing but a brief mirage in its long history. Instead, the government announced that to feed its 30 million people, it will rely almost entirely on crops imported from other countries. 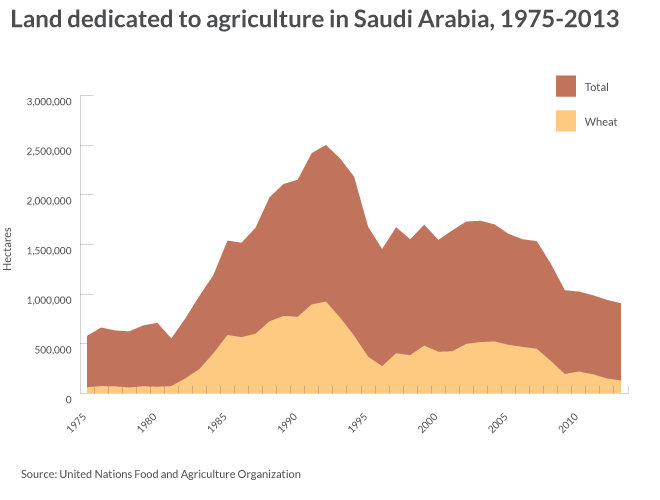 Sound familiar? The United States is also using up groundwater at an alarming rate.

Like Saudi Arabia, California’s agriculture relies heavily on water pumped from the ground — accounting for about 65 percent of its water use during these drought years, according to hydrologists. Even during normal years, arid regions in the Central Valley receive about the same rainfall as Riyadh, Saudi Arabia — 4 to 5 inches annually.

For the past two years, stories similar to Saudi Arabia’s have been bubbling up in the Central Valley, which produces about 10 percent of America’s agriculture. Wells are going dry, farmers are forced to chase water ever deeper underground, and the ground is sinking.

California scientists warn that they have little idea how much groundwater is left, or how long it would take aquifers to refill even if all the pumping stopped now.

Some California aquifers have been so depleted by irrigated farmland that the state is now pumping water that trickled down more than 20,000 years ago. Rainwater won’t recharge these ancient aquifers. When it’s gone, it’s gone — at least for the next 800 generations or so. Across the world, humans have pulled so much water out of the ground that it’s contributing to sea level rise.

Compared to Saudi Arabia, which relied mostly on its ancient aquifers, California has far more renewable resources like lakes, rivers, reservoirs and shallow aquifers that are recharged by mountain rainwater and melted snow.

Still, NASA hydrologist Jay Famiglietti wrote in the Los Angeles Times in March that California “has only about one year of water supply left in its reservoirs, and our strategic backup supply, groundwater, is rapidly disappearing.”

If California’s groundwater were to run out, it could result in a 65 percent reduction in irrigation and resulting crop losses during drought years like now.

A few months earlier, in November, Famiglietti wrote in the journal Nature Climate Change that many countries, including the United States, are on the same path as Saudi Arabia. “Groundwater supplies in some major aquifers will be depleted in a matter of decades. The myth of limitless water and free-for-all mentality that has pervaded groundwater use must now come to an end,” he said.

And elsewhere in the world?

China is home to one of the major at-risk aquifers cited by Famiglietti.

The aquifer system in northwest China has been experiencing similarly ominous signs as Saudi Arabia did a decade ago. Wells are going dry and water tables are dropping fast. The Earth Policy Institute estimates China is feeding 130 million people — about a tenth of its total population — by overpumping and depleting its sinking aquifers. When the aquifer system runs out, analysts say, China will need to rely on foreign farmland to feed 130 million people, equivalent to about 1 in 3 Americans. They will be competing with the 30 million Saudis already relying on imported food.

A global domino effect has begun. As one country runs low on water, it turns to another, putting more strain on those water reserves. Last year, both China and Saudi Arabia had record-high agricultural imports from the United States.

Almarai, one of Saudi Arabia’s two main dairy producers, purchased 15 square miles of farmland in the Arizona desert to grow alfalfa for export back to the country. Alfalfa is so water intensive that it requires three to four times more irrigation than wheat. That water comes from the Colorado River, where reservoirs are at an all-time low, threatening the drinking water for Las Vegas, Los Angeles and San Diego.

In 2013, with the financial and political backing of China’s government, a Chinese company purchased America’s largest pork producer, Smithfield Foods, securing 1 in 4 American-raised pigs, plus the water-hungry grains those 30 million pigs consumed. It was the largest-ever Chinese acquisition of an American company. By buying food from overseas, these countries are in effect importing water — increasingly American water — in the form of corn, soy, nuts and meats.

The United States has no national plan to monitor the effect these water exports are having on its aquifers. The Saudis did the same thing. And it cost them dearly. As Elhadj wrote in 2004, what Saudi Arabia did was “synonymous with shipping away the country’s finite water resources.”

California is now threatening restaurants with a $500 fine if they serve drinking water to customers — unless a customer requests the water. But the entire state — all 38 million people — drink only about one-tenth of 1 percent of the state’s annual water use. In comparison, farmers, who face no water restrictions, use about 7 percent of its annual water to grow almonds for export overseas.

If there is a lesson emerging, it is this: Wells run dry. Mismanagement flows eternal.