India’s Crime Records Bureau reveals that nearly 50 percent of crimes against women in India come from within the family. And that figure is rising. Baby and her daughter Shaheen tell their story on camera.

It’s a bleak set of options: Stay with your abusive and alcoholic husband, or raise your children homeless and without a father in a culture that persecutes single mothers. That's the decision that Baby, who lives in a New Delhi slum, had to make.

She says she takes the abuse from her husband to ensure the brightest future for her teenage daughter, Shaheen, and her other children.

Click on any image to experience a 360-degree interactive panorama look at life in the Bawana JJ Colony slum. 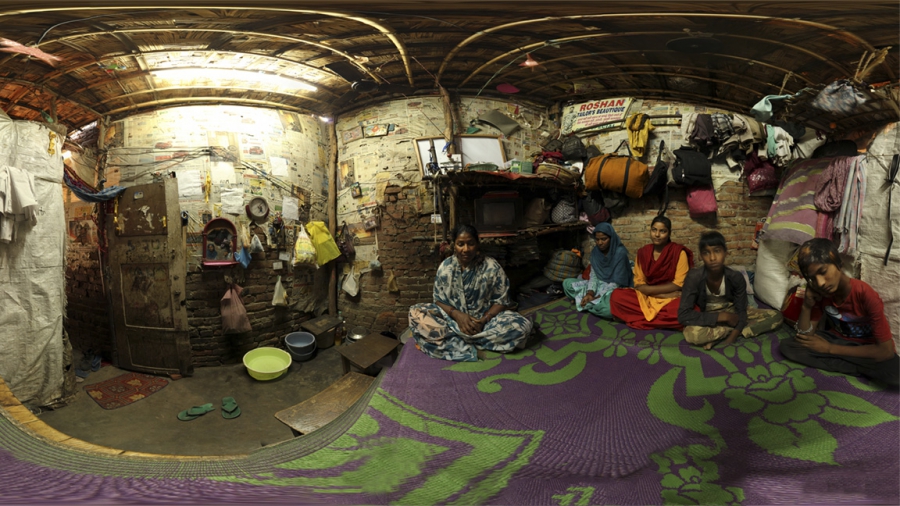 A panorama view of the interior of Baby's tiny house in the Bawana JJ Colony slum on the outskirts of New Dehli.

Getting to Baby's home isn't easy. First, you'll have to take a 45-minute metro ride from the heart of New Delhi, to the line's last stop, Rithala. From there, you’ll have to take an hour-long bus ride to Bawana Juggi-Jhopdi Colony — what the government calls a slum “resettlement.” In her slight brick and concrete home, Baby explains why she made the choice to stay with an abusive husband. Her teenage daughter believes domestic violence is part of every home. 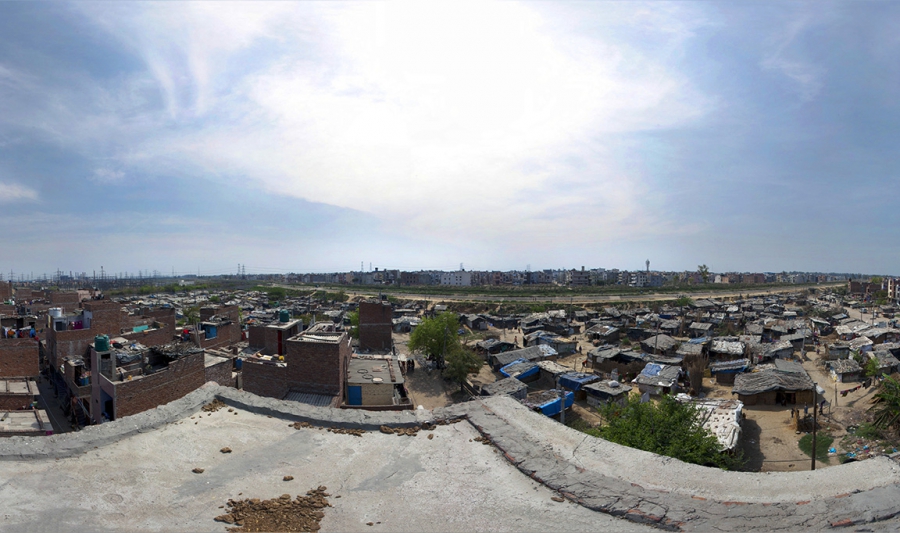 Meandering through the complexes can be disorienting, especially on hot days when there isn’t much shade to keep the sweat from rolling. Every passage looks like the last. Flies feast off the drainage system clogged with sewage, while goats and chickens roam free.

Bawana JJ Colony is where the Delhi government tells people to go when it destroys their homes for development. It started in 2004, in preparation for the Commonwealth Games. Baby has lived in this structure since then, without a toilet, with about a dozen family members and more than 100,000 neighbors. 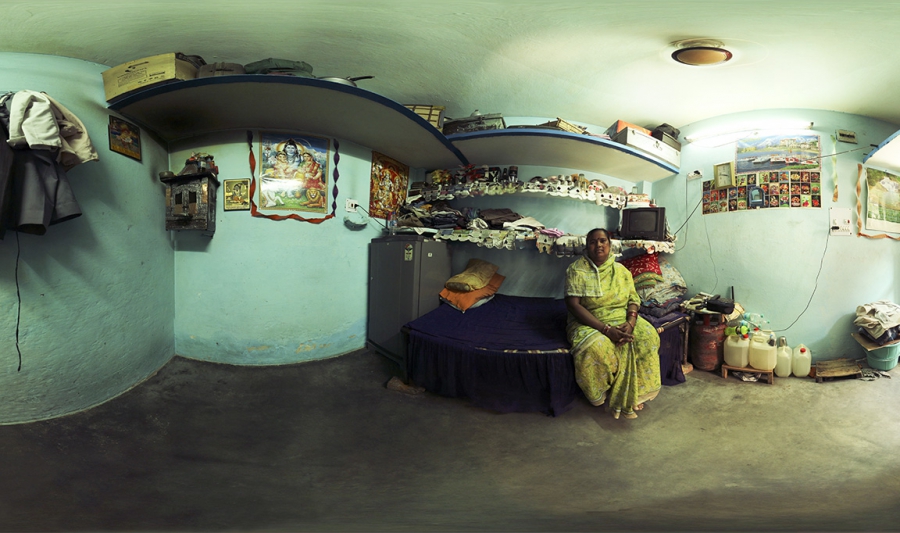 Inside the home of Bimla, another resident of the Bawana JJ Colony

During the day, the slum is filled with mostly women and children because the men are, in theory, out working. The kids are bubbly and curious, running around in groups and making games out of spying on the outsiders until they’re caught. The women are inviting, hospitable, diligent, sobering and raw. Their days are filled with some of the toughest challenges in a place completely isolated, yet devoid of privacy. At night, space is tighter, alcohol and drugs emerge, stressors compile and crime and violence can spiral. 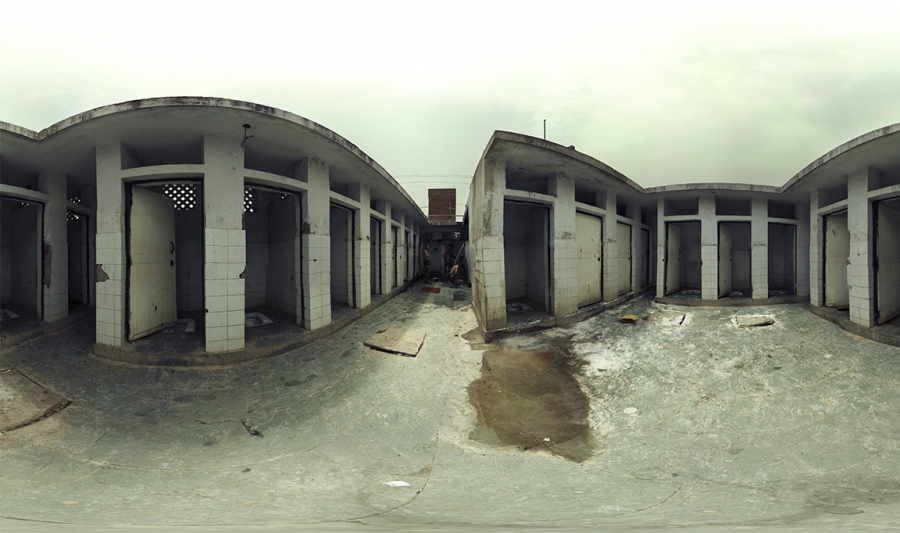 While this paints a grim picture, reporter Rajan Zaveri and I wanted see how women live through it. We wanted to figure out how to show there is no one single problem; they are all entangled. Domestic violence is a problem, but it’s a result of many knots and a contributor to others.

India’s Crime Records Bureau reports that nearly 50 percent of crimes against women come from within the family, and those numbers are rising.  Women in slums rarely report such crimes because police, if they’re even around, aren’t usually on their side. The bureau shows that only 15 percent of domestic violence cases in the country lead to a conviction. There aren’t any slum-specific statistics. But even if there were justice in slums and violent husbands were thrown in jail, how could their wives pay for lawyers and still take care of their families, let alone take the time to get to court? 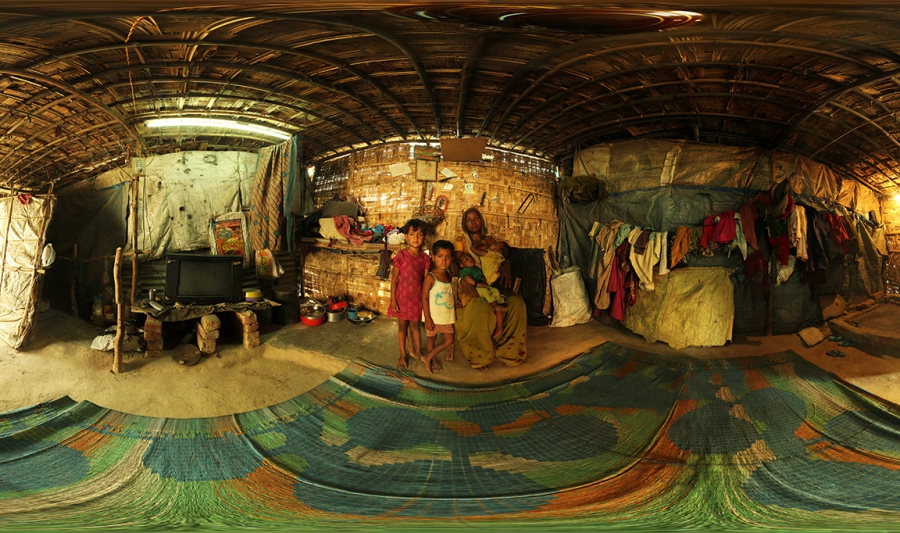 These issues are thorny and difficult to parse. But most of about a dozen women Rajan and I interviewed said that the distance from the heart of the capital may be the worst.

This story is part of a larger interactive project about the Bawana JJ Colony. To experience the full project, click here.