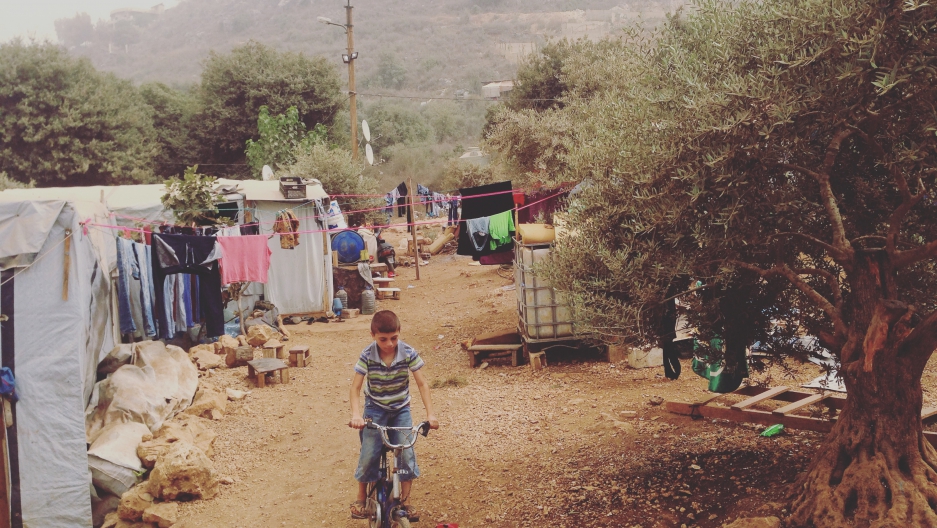 A young boy rides his bicycle at an informal camp for Syrian refugees in Ketermaya, Lebanon.
Credit: Richard Hall
Share

This article was first published on Sept. 11, 2015. It has been updated since then to reflect the latest numbers.

KETERMAYA, Lebanon — There is a small village in the mountains of Lebanon that is hosting about as many Syrian refugees as all 50 US states combined.

Situated at the southern end of the Mount Lebanon range, Ketermaya is a quiet little place surrounded by patches of farmland. Much of the traffic in the area goes to and from a nearby cement factory.

It isn’t a particularly wealthy town, but the residents here have taken in thousands of refugees fleeing the war in Syria.

“We have a history of welcoming refugees,” says Ali Tafesh, a local business owner. “In 2006 we did the same,” he adds, referring to the displacement of people caused by Israel’s invasion of southern Lebanon that year.

More from GlobalPost: A harsh winter for Syrian refugees in Lebanon

Tafesh has done more than most. When Syrian families started to arrive in the town in the early days of the civil war, he arranged housing for them. When there were no more places left to stay he offered up his own land.

"We built the first tent for two families. Then more people came and we built a second, and then it just kept growing,” he says.

The International Organization for Migration (IOM) said in late December that more than 1 million refugees and migrants entered Europe in 2015, compared with 280,000 for the whole of 2014. The organization has said it's likely that even more people went in undetected.

European leaders have struggled to find a coherent solution to a worsening refugee crisis within its borders. Germany has led the way, promising to take in half a million refugees annually over several years. Hungary, meanwhile, began introducing harsh new laws that would target migrants and rushed to build an anti-migrant fence on its southern border.

As of mid-November, the White House said the US had resettled 2,174 Syrian refugees. The US State Department gave the number as 2,234 on Nov. 25. The village of Ketermaya hit 2,000 recorded refugees that same month. President Barack Obama's administration had aimed to admit 5,000 by the end of 2015, and the president said in September that he had ordered his administration to prepare for double that number in 2016. Aid agencies have said this is not enough: Oxfam America had been calling for the US to resettle 70,000 Syrian refugees.

But compared to the crisis facing Lebanon, those numbers are a drop in the ocean. 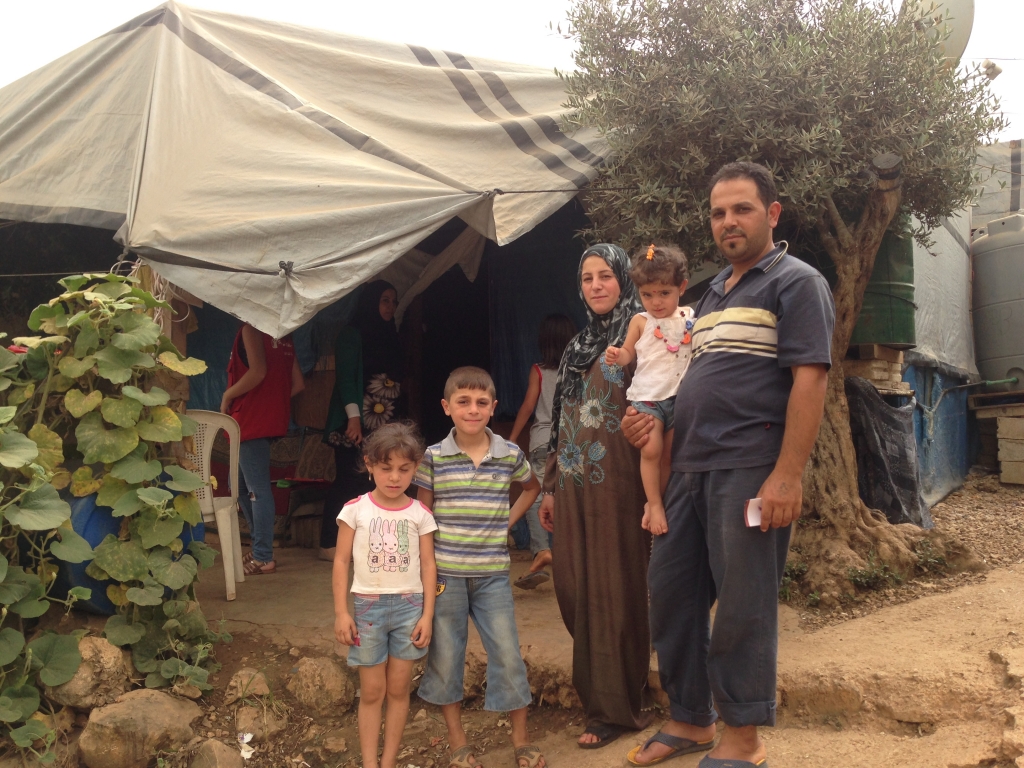 Sihan and Ibrahim stand with their children outside their home at an informal refugee camp for Syrians in Ketermaya, Lebanon.

There are currently more than one million registered Syrian refugees in Lebanon (the actual number of refugees is thought to be much higher). If you include the estimated number of unregistered refugees, Syrians now account for more than a quarter of the country’s population. The Chouf region, where Ketermaya is located, is hosting nearly 60,000 refugees.

In some areas, the influx has put a strain on the local population as they now have to compete for jobs and resources with a greater number of people.

There are no official refugee camps in Lebanon. Instead, refugees are scattered across the country and make their home on whatever land they can find. Some make arrangements with landowners before building their shelters. Others build and then wait for their landlords to arrive, asking for rent.

Tafesh hosts 330 Syrians on his one-acre plot — a stony patch of land on the side of a hill, with olive trees scattered in between makeshift tents. At his own expense, he built a toilet and installed running water into the camp.

He doesn’t charge the residents of this camp, but people like him are in the minority. Most refugees pay rent to landowners, even when their accommodation is little more than a wooden shack.

“I wasn’t using my land for business purposes so I could afford to let people stay here. Others are not so lucky,” says Tafesh.

Most of these settlements exist at the mercy of the elements. In the winter they are bashed around and sometimes destroyed by storms, and in the summer they are often too hot to bear staying inside.

School dayz at an informal camp for Syrian refugees in Ketermaya. Residents of the camp built it themselves from wood and old palettes. #syria #lebanon #refugees

While some Syrians are making the journey to Europe, others do not have the money or other means to get there. Many of those who fled to Lebanon did so because it was the only option open to them.

Sihan left her hometown of Qusayr with her husband and four children in 2013, after their house was destroyed in a government airstrike. She pulls back the hair of her young son Muhammad to reveal a small scar on the side of his head made by the explosion.

“We have no other choice but to be here,” she says. “We are sitting here with nothing. My husband is not working so we have no money for rent. It’s hard in the winter and in the summer.”

More from GlobalPost: The refugee from Homs who can't afford to feed his family

The UN is currently facing a funding shortfall that means refugees here barely have enough to survive on. Sihan and her family receive $13 per person per month from the UN for food, and often it won’t last two weeks.

“Thank God we have this tent,” says Sihan. “Lebanon is not able to look after its own people, how are they going to look after Syrians as well?”

Despite the miserable living conditions for refugees in Lebanon, not everyone wants to go to Europe.

Ahmed, an Arabic literature graduate, came to Lebanon from Damascus suburb of Ghouta three years ago, bringing his wife and two children.  He and a few other camp residents built a school among the tents and now he teaches the children in the camp.

He says that going to Europe would make it less likely he would return to Syria one day.

“Everyone loves their country. If the bombing stopped I would go back home. I am here because I want my children to be safe.”

Employment prospects are dim for the camp’s residents. Sihan’s husband Ibrahim can earn $20 a day working in construction, but the work is irregular.

Save the Children was running a school in the area which recently ran out of funding. It is to reopen soon, providing full time education for children up to the age of 12. 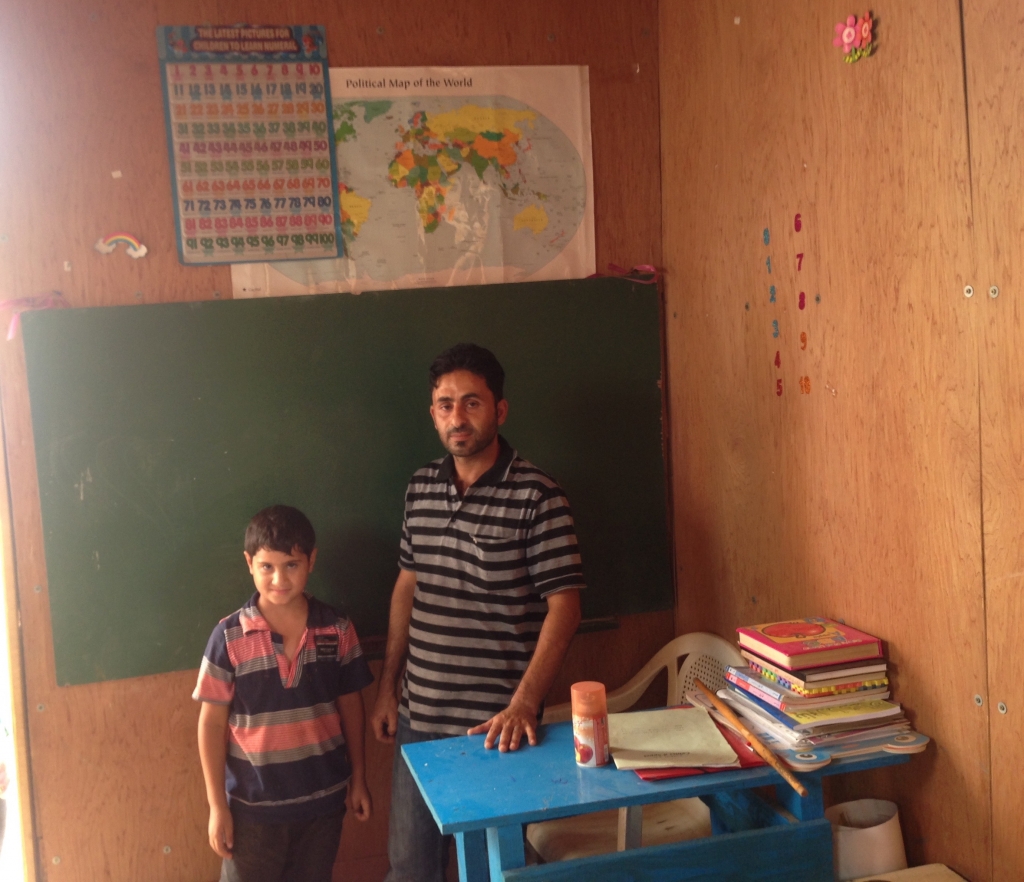 Ahmed, a teacher at a school built by residents of the camp in Ketermaya, Lebanon.

Sihan and Ibrahim say they have thought about going elsewhere, but wonder where they would get the money to move.

When asked if Gulf countries should do more to help Syrian refugees, Ibrahim replies: “In Kuwait, they have big parties with fireworks. The amount they spend on that could feed the Syrian population.”

The couple would like to go to Europe, but they fear the journey is too dangerous.

“We would go if we thought it was safe. We don’t want to get thrown out of a boat,” says Ibrahim.

The whole family is weary from their ordeal. They entered the country illegally by traversing the anti-Lebanon mountains on the border with Syria.

Sihan, it seems, would like to wait a little while longer before making another arduous journey.

“We came over a mountain to get here. We are not ready to do it again.”