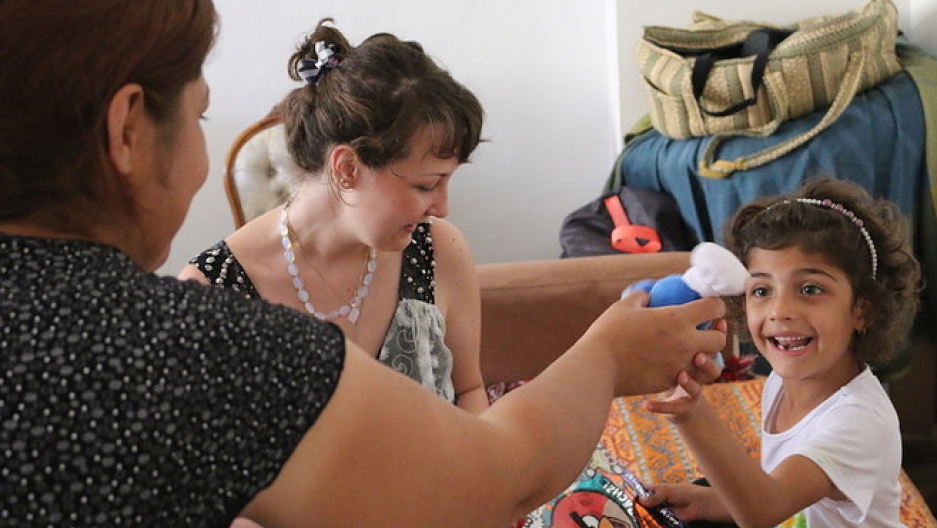 A Syrian child receives a toy in the home of a Berlin resident.

Sometimes a single kind act in one country sparks another a world away, in a chain that alters lives across generations.

Ask Anna Dushime. She's a Berlin resident, and a survivor of Rwanda's 1994 genocide. She's also a reporter for BuzzFeed.

A few weeks ago, Dushime visited a crowded refugee registration center in Berlin, carrying armloads of diapers, cookies and water.

She met a family who'd been waiting in a Berlin registration line for five days, with little food or water. The father and his 8-year-old daughter had been caught up in an altercation with police and had been tear gassed.

The family — including the father, Mohamed, his wife, Roqa, and their two girls — led Dushime to think of her own risky flight from Rwanda two decades ago, and a stranger's willingness to take a risk on her behalf.

"On our way to Uganda, a man took us in in his house and we showered for the first time in a long, long, long time, and we slept in proper beds, and we were very very grateful for that," she says. "I remembered my mom having to flee with small children, and I felt the same way seeing the two kids."

So Dushime returned the favor. She'd only known the family for a few hours when she invited the Syrian mother, father and two little girls to share her apartment for the weekend. She wrote about it for BuzzFeed.

"I prepared the room for them with fresh sheets and they showered," she recalls. "Then I went on Facebook and asked people if they had clothes for kids."

Today, the Syrian family still faces a difficult transition, as many in Germany oppose the government's plan to receive more than 800,000 refugees and migrants this year. Still the four have now settled into a small Berlin apartment. The two girls are registered for school.  Dushime keeps in touch with them via WhatsApp, exchanging selfies and emojis.

"I'm really overwhelmed by how the general public have been welcoming of refugees," she says. "At the same time almost every day we have a situation where refugee centers or soon-to-be refugee centers are attacked, so that also makes me very, very worried."