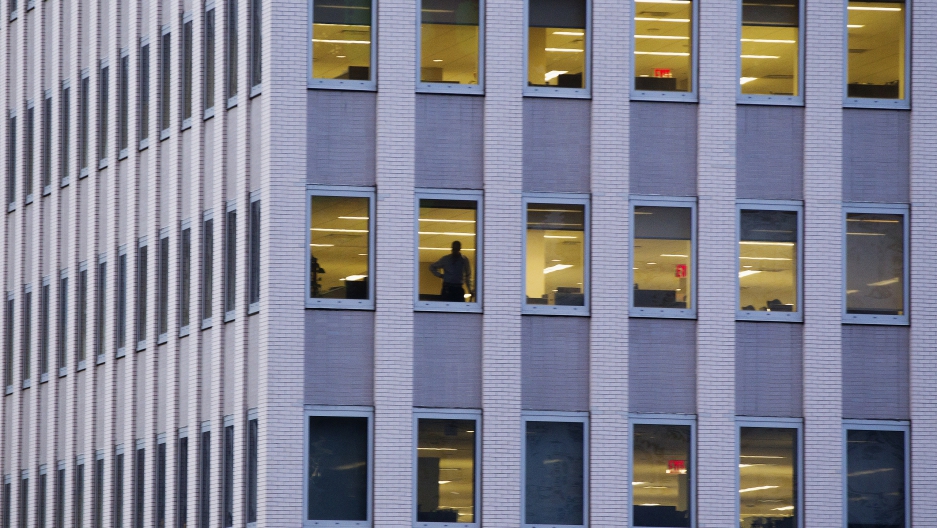 A man watches from an office window, members from the Occupy Wall Street movement (not pictured) carry signs as they march down Broadway during a May Day demonstration in New York, May 1, 2012.

A recent investigation by The New York Times revealed the ways Amazon measures and monitors employees at its headquarters, crunching data to sort out who is most efficient and deserving of promotion — and who isn't. But this gamification of the workplace is far from new.

UPS drivers, truckers, authors and retail clerks are also subjected to the tracking power of technology — and the outcomes aren't always effective or ethical.

“No technology is good or bad. No technology has the same effect on everybody. A lot of it depends on the context in which it gets deployed,” says Karen Levy, a fellow at the Data and Society Research Institute in New York.

Attempts to track employee performance using technology are nothing new. Companies tracked tailors’ work productivity a century ago, and call centers began monitoring their employees electronically in the 1990s, watching email and web use. Only recently, however, have companies begun tracking the performance of employees doing very sophisticated work.

“It's only in the last three to five years, really, that we're seeing the kinds of things that we saw in that Amazon article in the Times, which is the monitoring arriving ... in the cubicle, [applied to] white-collar knowledge workers. Not just data entry clerks, but people who are doing very high-level tasks,” says Esther Kaplan, an editor at the Investigative Fund, a non-profit reporting workshop in New York.

To understand the effects of using technology to track employees, researchers have turned to the trucking industry, which has nearly a decade of experience with monitoring.

Levy spent three years talking to people associated with long-haul truck driving, and delivery driving, trying to get a sense of how truckers’ lives have changed in response to new tracking technologies.

UPS workers are monitored by their handheld delivery information acquisition device, as well as 200 sensors on each delivery truck. They can have as many as 40 pages of data produced about each shift. If they are seen to have spent too much time at a delivery stop, or keep the back of their truck open too long, they can potentially face a review or disciplinary measures.

Truckers similarly have their fuel consumption tracked, and are usually paid by the number of miles that they drive.

According to Levy, these new efficiency measures can sometimes have an adverse effect.

“What has happened is that drivers have started to internalize a lot of risks and costs that they didn't have to bother, so things like the risks of bad weather, of congested traffic, all kinds of unpredictable delays on the road, and then other things that we really want them to do. We really want them to inspect their trucks, they're required to do that for safety reasons, a lot of truckers weren't doing that. They weren't paid for that time, and those times didn't get measured. What happens is that workers get incentivized to either cut corners or they end up taking on a lot of these burdens for themselves,” Levy says.

Other companies have attempted to use wearable health devices to track employees. Andre Spicer, professor of organizational behavior at Cass Business School at City University London has been studying these tracking efforts. Ikea has given its workers tracking devices as a gift. BP has handed out the devices and then offered employees health insurance discounts. Banks and hedge funds have been known to require traders to wear the devices, and then used them to correlate their trading patterns with how long the employees sleep, drink, eat and so on.

Still other companies are using data to develop algorithms and software for scheduling shifts based on sales, weather and real time events. The technology has optimized labor, but there are downsides to the efficiency measures as well.

“It sounds like it's just a way to sort of optimize labor and make your processes more efficient. The problem is that those algorithms can really wreak havoc on workers' lives by setting just really unpredictable and unlivable schedules,” says Levy.

Many researchers stop short of condemning tracking technology altogether. Instead, they are urging companies to use technology to not only improve efficiency, but also improve workers’ lives.

“These algorithms are very sophisticated,” Kaplan says. “Employee interests could be factored in. These systems could be modified to take into account the needs of workers. It just hasn't happened yet.”

This story is based on an interview that aired on PRI's Science Friday.