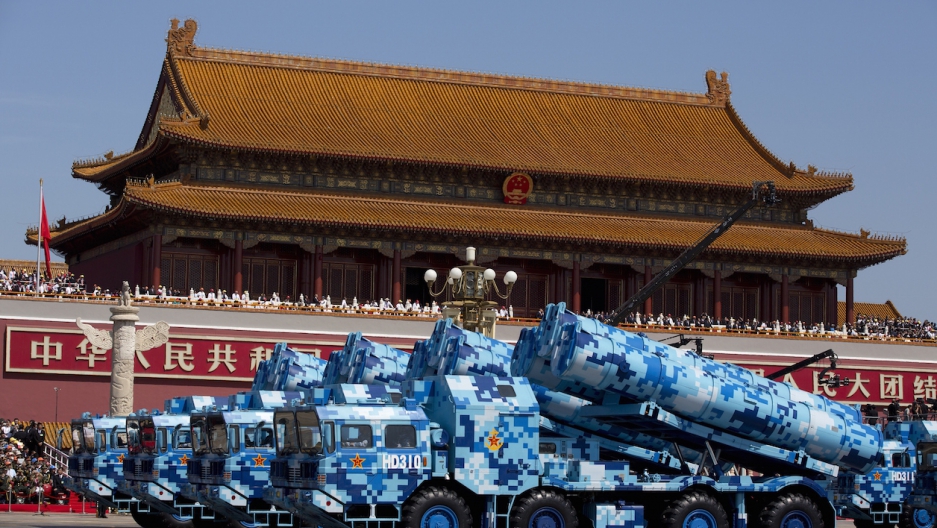 After weeks of intensive preparations that for some reason included eating macabre ice-cream treats, using trained monkeys to frighten birds, and banning reality TV, China showed off its military might in the largest-ever display of China's weaponry, troops, and loudly singing all-male choirs in a massive parade through Tiananmen Square this morning.

President Xi Jinping, sweating visibly in a glossy dark Mao suit, waved from a rostrum where he, Chinese leaders, and a smattering of foreign visitors including Vladimir Putin watched some 12,000 troops goose-stepping by.

The parade, which marked the 70th anniversary of the end of WWII, was also the first time China revealed to the world some of its heaviest new weapons, including a long-rumored "carrier killer" cruise missile intended to render much of the core of the US Pacific Fleet obsolete. (No other nation possesses such a missile, due to a treaty signed by the US and Russia in 1987.)

In the midst of all the pomp and pageantry, Xi announced cuts of 300,000 military personnel, calling the decision a gesture of peace.

Though, as the Ministry of Defense later clarified, those cuts will come from units with non-combat personnel.

Jains, followers of one of India's most ancient religions, may soon be banned by law from practicing a 2,000-year-old custom of ritual self-starvation, GlobalPost's Nimisha Jaiswal reports from New Delhi.

The ruling, which came down earlier this summer in Rajasthan, found that choosing to die in this manner, refusing food until death, constituted a criminal attempt of suicide, and that those who assisted in the ritual could also be charged.

The decision has provoked anger in the small but prosperous and influential Jain community, who have flooded the streets in protest, claiming it violates their religious freedom. In response, the court stayed the ban this week.

Critics of the starvation custom, called Santhara, say that elderly and helpless Jains could be forced by their families to die painful deaths, against their wishes.

Ever wondered how many trees there are in the world? Not approximately — no "give or take 100 million" here — but exactly? No?

Well, too bad, because researchers at Yale University counted them anyway, answering a question that has haunted the parents of annoyingly inquisitive children for generations.

There are 3.04 trillion trees in the world.

That's more than 400 trees per person, and many times more than earlier estimates. To come up with the count, the researchers used satellite imagery and stitched together ground data from around the world.

Though it's a bigger number than expected, the tree count is sadly dropping by 10-15 billion per year, researchers said, thanks to humans wantonly cutting them down.

Next time a kid asks, now you know.