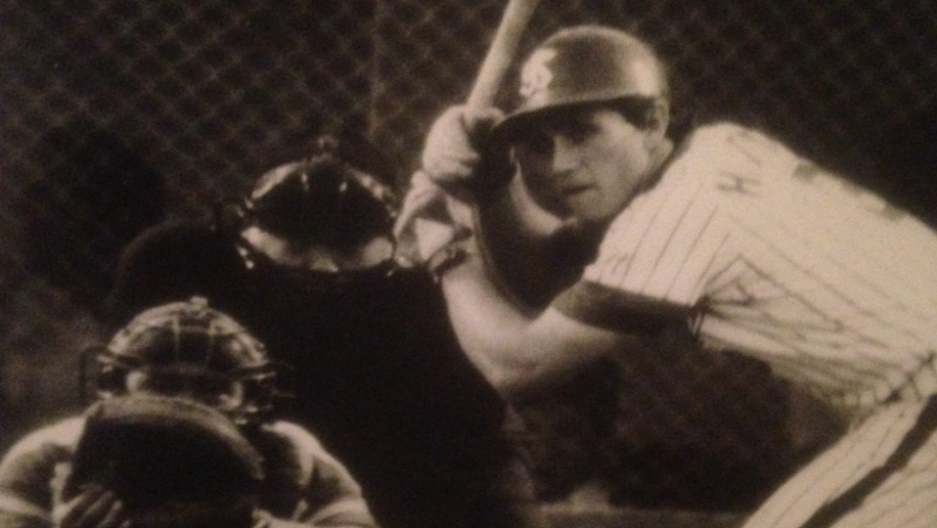 Infielder Dave Hilton of the Yakult Swallows baseball team awaits a pitch during a game in Japan.

When Dave Hilton wrote a letter to baseball clubs in Japan asking for a tryout, he didn't know it'd eventually help launch the career of a world-famous writer.

Hilton was a professional baseball player.

He had a few seasons under his belt with the San Diego Padres.

But he wanted adventure.

That’s why the letter went to Japan.

There's good baseball there, too.

Still, he knew it was a long shot.

"You know, it's actually difficult to even get considered," he says. "Well, I just wrote a letter with no connections and no agent, and no nothing. And I didn't even know if the letter would get there."

It did. Then things went fast.

A Japanese team arranged for a scout to give him a tryout in Arizona.

Hilton drove through the night to make it on time.

Then the infielder put on show.

"I think I took a hundred or so groundballs and caught every one perfectly and smoothly. And then I hit about a hundred pitches of batting practice. And just about all of them were line drives, whack kind of sounds out there. And I had a very good tryout and he recommended that they sign me."

They being the Yakult Swallows of Tokyo.

All these years later, Hilton vividly recalls the night he flew into the city.

He looked down at the bright lights.

But the fantasy turned to work.

The Swallows were never really a top team. They really needed him.

On opening day in April, 1978, Dave Hilton stepped up to the batter's box inside a raucous Jingu Stadium.

"I was the leadoff hitter in the opening game. And my first at bat I lined double down the left field line."

The crack echoed through the Stadium.

"Yeah, it was just like a loud whack or crack or thwack," he says.

I'd argue that's the most important double anyone has ever hit.

For in the stadium was a Swallows fan.

You know him now, of course, as the perennial favorite to win the Nobel Prize for literature.

He's the author of "The Wind-up Bird Chronicle" "Norwegian Wood" and "What I Talk About When I Talk About Running."

At the time, though, he hadn't written a single book.

In an essay year later, he recalled that day and that moment like this:

"In that instant, for no reason and on no grounds whatsoever, the thought suddenly struck me: I think I can write a novel."

That was Murakami's spark. Dave Hilton's double somehow unlocked the confidence or desire to write.

Murakami has told the story again and again.

Most recently, it's in the introduction to the reissue of his first two novellas in English.

Some dude hits a baseball and you're like.. Hmm, I think I could really write a novel.

Well, Scott Barry Kaufman assures me this is actually quite common.

Kaufman's upcoming book is called, "Wired to Create: Unraveling the Mysteries of the Creative Mind."

He directs the Imagination Institute at the University of Pennsyvania.

So he's the perfect guy to chat with about Murakami's creative origin story.

"I think this story is actually kind of a perfect illustration of the situation because it's seemingly such an unrelated event," he says. "Yet it's such a common thing when people have the crystalizing experience. It's usually at something where their consciousness has not been actively been trying to figure out what it is they are trying to do."

Kaufman thinks Murakami's subconscious though, had been kicking around this idea of writing a novel for a while.

But the thought did not emerge.

That is, until Dave Hilton's accomplishment — that double — triggered it.

"That can actually activate some sort of unconscious idea of like, 'Oh, that's what I can do to recreate this feeling of accomplishment.'"

Murakami's way was to write.

As Dave Hilton stood on second, he had no idea about any of this.

He went on to help the Swallows win their first championship.

And he continued to play professionally for several more years in Japan.

Then he came home to coach.

It took decades for Murakami's story to get to him.

And since then, every couple years a reporter like me calls him to ask what it feels like to have this link.

"Well, it's very cool. I appreciate it very much. I believe in that kind of thing in life happening. And different events triggering other events that you don't even know about," he says.

But he wants to.

"I would probably ask him about his process for writing. And how he comes up with his ideas and how he pursues them. And just, conversation. I would love to do that."

It's not because Murakami is famous.

It's because at one point in his life Dave Hilton really wanted to be a writer.