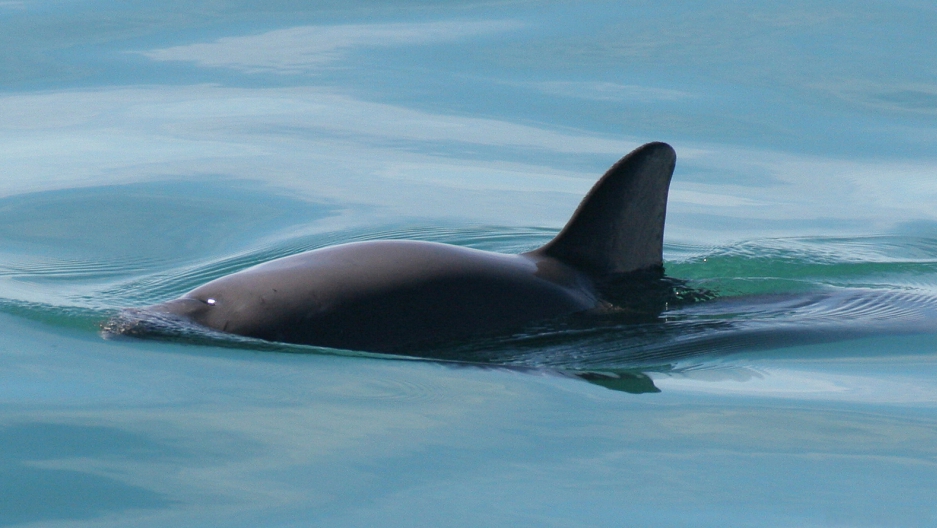 Vaquitas are considered the smallest and most endangered cetacean in the world.

The world’s most endangered marine mammal is a small porpoise called the vaquita — Spanish for little cow. The vaquita has been under threat for years, but now the poaching of a rare fish may be driving the tiny Mexican porpoise to extinction.

The vaquita lives only in the Gulf of California off the coast of Mexico. For years, Mexican fishermen have accidentally caught the five-foot porpoise in gillnets set for fish and shrimp. “This has driven the population from a size of about 500, 20 years ago to less than 100 today,” says Duke University professor Andy Read.

But now the critically endangered vaquita faces another threat — fishing nets set illegally to catch a protected species called the totoaba. The totoaba is a large sea bass, or croaker, and its swim bladder can fetch up to $8,500 per kilo in Chinese medicine markets.

Mexican law protects the endangered croaker, but with so much money at stake poachers continue to fish for totoaba. Read says that’s a problem on two fronts. The totoaba population cannot withstand the current fishing rate, and the vaquita seems particularly vulnerable to entanglement in illegal totoaba nets. “So a fisherman that might catch four or five totoaba in his net, might also catch one of the last vaquitas as well,” he says. "We’re worried that that bycatch of vaquitas is going to drive them to extinction.”

It’s a modern conservation nightmare. The poaching of an endangered fish species, bad enough on its own, is also driving a beloved whale to the brink. “[The vaquita] is Mexico’s porpoise,” says Read. “It’s not found anywhere else. So if we lose it, the people of Mexico will have lost part of their biodiversity in what is really a completely preventable manner.”

Earlier this year, Mexican President Enrique Peña Nieto announced a two-year program to ban all net fishing from the upper Gulf of California in an effort to save the vaquita. The government will pay out more than $30 million in compensation to fishing families in order to keep their nets out of vaquita habitat. But stricter fishing regulations are not stopping totoaba poachers.

“It’s a large area, there are a lot of fisherman, and it’s difficult to eliminate a fishery like that, especially one that’s so lucrative” Read says, “and so we’re very concerned that enforcement efforts won’t be sufficient.” A fisherman can make more money in two nights going after totoaba than in an entire year of legal shrimp fishing.

Read says we need a sustainable solution that protects the vaquita, the totoaba and the Mexican people who depend on the ocean.

“We need to help those communities develop sustainable fisheries so they can continue to make a living from the upper Gulf.” Any efforts to save the vaquita need to happen fast. A new survey this fall will give scientists a better idea of the exact size of the vaquita population, but Read says time has just about run out for Mexico’s porpoise. “I try to be optimistic that enforcement efforts will be enough to stop the illegal fishing. But we really are at the last second of the last minute for this species. It’s very dire.”