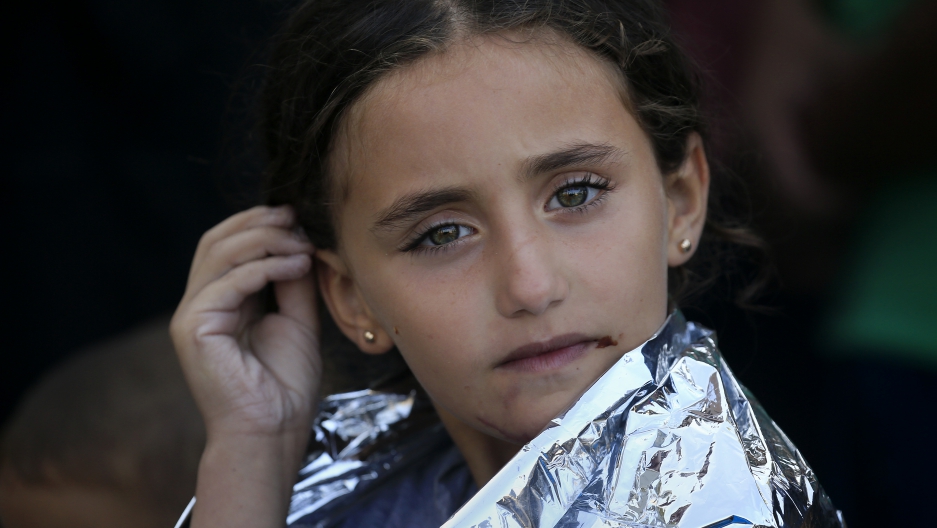 A young Syrian girl is wrapped with a thermal blanket following a rescue operation on the island of Lesbos, in Greece.

When Iceland's government announced that it was only willing to take in 50 Syrian refugees during the next two years, Reykjavík resident Bryndís Björgvinsdóttir got angry.

"Fifty people is not even a good wedding party," she says.

So Björgvinsdóttir created a Facebook event page, where some 10,000 of her fellow Icelanders offered their homes, as well as food and clothing to Syrians on the run.

But Björgvinsdóttir's Facebook page has also attracted skeptics, who argued that extending a welcome to refugees only encourages vulernable populations to risk their lives in rickety boats or as stowaways.

"Tell us the date when you'll leave Islam, we can talk about immigration then," one post reads.

For her own part, Björgvinsdóttir says she can't offer Syrians shelter since she lives with her parents. But she's teamed up with a friend who says he has enough extra space to house five refugees fleeing Syria's war. Björgvinsdóttir has promised to pay the costs of plane tickets for the five Syrians.

"I don't think it's that much for five lives," she says.

Meanwhile, further south in the Greek island of Lesbos, residents have been facing a sharp increase in the number of refugees arriving on the island’s shore. Greece has called on governments in norther Europe, places like Iceland, to help relieve the pressure.

According to Kirk Day, the emergency field director on Lesbos with the International Rescue Committee, 4,000 refugees arrived on the island last Saturday alone.

Similar numbers made it there on Sunday. Day says the situation is “near complete chaos.”

He says the town of Mytilini has a population of around 30,000.

“One out of every four or more people that you see are refugees,” he says. “People are sleeping on the sidewalks, alleyways and parks.”

But while the situation has left Mytilini residents overwhelmed, Day says that for some businesses, the refugee influx has been good. That’s because many of them have brought with them their entire life savings and some have been spending that money on food and lodging.

But on the whole, the tiny island can’t handle the sheer number of people.

“If you take five years of austerity measures and you take the most recent financial crisis and their consequences, then how well-suited do we think an administrative structure should be on this remote island to handle this massive influx of refugees?” Day asks.

While the Greeks have been feeling the pressure from the large number of refugees, things certainly haven’t been easy for the refugees, either. Many, Day says, never wanted to leave their country in the first place.

“The Syrians love their country and they don’t want to necessarily leave, but they say that there were simply no way that they and their families could live safely in their homes,” he says.