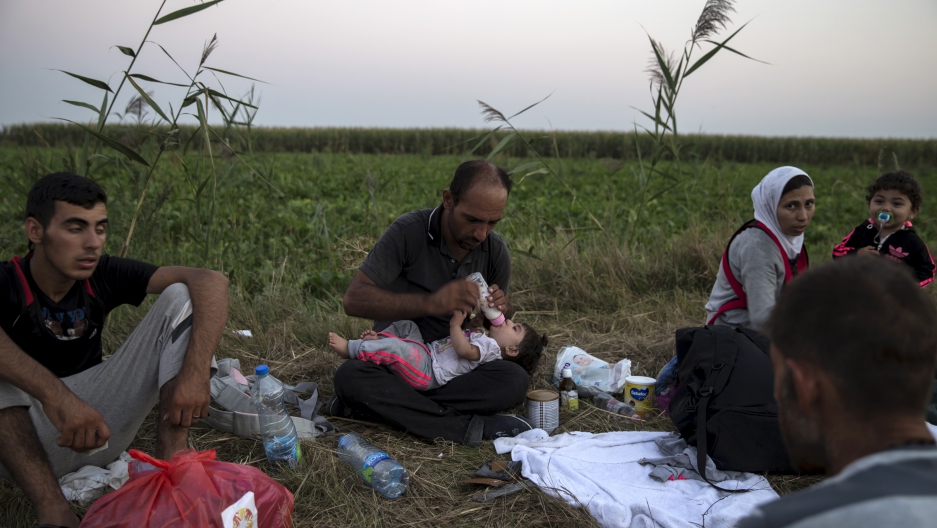 A migrant, hoping to cross into Hungary, feeds a child with milk as they sit on a field outside the village of Horgos in Serbia, near the shared border with Hungary.

Along Hungary’s once sleepy border with Serbia, something unprecedented is happening. The Hungarian government is racing to install and reinforce more than 100 miles of new barbed wire fencing. All the while, thousands of migrants are pouring over the frontier, looking for new lives in the European Union.

This year, more than 340,000 migrants have crossed into Hungary from Serbia, more than triple the number last year. Many more are thought to have gone undetected.

According to the BBC’s Nick Thorpe, Hungary’s sudden popularity as a route stems from its position on the eastern edge of the European Union’s Schengen zone of passportless travel, and the practical difficulty of sealing its border. “There are gaps in [the new fence] — where a river flows, where a railway line lies” Thorpe says. “Through those areas, large numbers of people are crossing.”

The best daily estimates are that about 3,000 people a day are making it into the European Union along this border.

Among them are the injured and the desperate. Thorpe met one Syrian man from Aleppo, a doctor, who was travelling on foot with a wounded leg. His only crutch was a stick from a tree branch: “He was in a suit and tie, completely drenched in sweat. He still kept the dignity of that suit. Not even the top button had been undone.”

This week, Britain, France and Germany called for a new approach to the migration issue, with new reception centers to be setup, where migrants and refugees could be fingerprinted and recorded once they arrive in Europe.