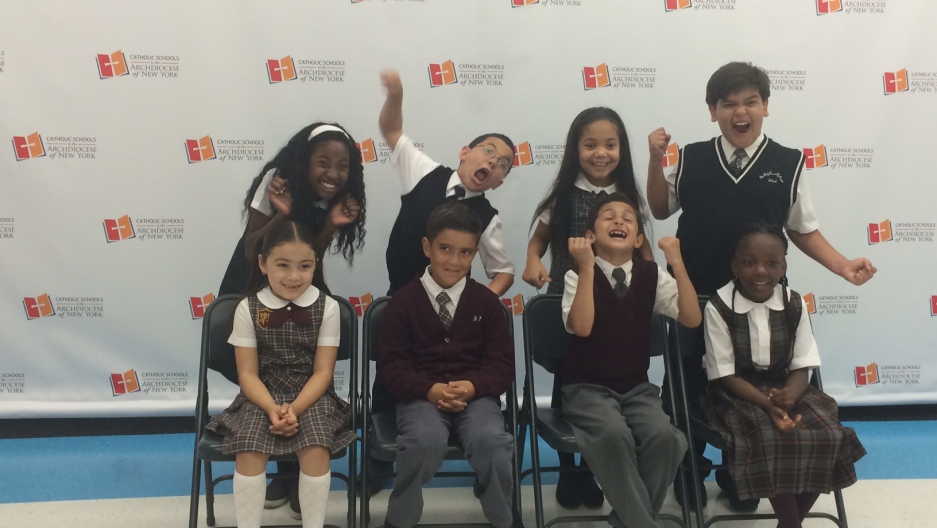 Students at Our Lady Queen of Angels, an elementary and middle school in East Harlem that is preparing for a brief visit by Pope Francis when he comes to NYC in late September.

Fourth-grader Nicholas Marronaro has a few questions for Pope Francis.

Here’s another one. "I’m going to ask him if he collects the stamps with his face on them."

Marronaro is a student at Our Lady Queen of Angels. It's an elementary and middle school in a low-income and heavily immigrant part of East Harlem, and it will host the Pope on September 25. Marronaro is among 24 students from four Catholic schools in and around East Harlem who will meet the pontiff in a classroom where they will pray together and talk about the environment.

Timothy McNiff, superintendent of schools for the Archdiocese of New York, said Pope Francis wanted to see an example of inner city Catholic education during his stay. Officials chose East Harlem because of it's convenience with his other Manhattan stops that day — including the United Nations. Other events set for the Pope's NYC visit include a ceremony at the site of the World Trade Center Attacks and a mass at Madison Square Garden.

Students from all 31 Manhattan Catholic elementary and middle schools will line the street to greet his motorcade. McNiff said only third and fourth graders were chosen for the personal meeting (with guidance from principals and lotteries) because that's when children start receiving sacraments, including communion.

Noah Rodriguez, who attends St. Ann School, said he was excited but nervous when he found out earlier this month that he was selected.

Noah is Catholic and Latino, but about 30 percent of the 1,050 or so students at the schools are neither — including 7-year-old Essa Nahshal, who’s Muslim, but equally enthusiastic. He's been learning little tidbits about the pontiff.

"He was born in Argentina and he only has one lung," said Essa, a third grader at St. Charles Borromeo School in West Harlem.

A lot of the kids seemed fascinated by the fact that the Pope had a lung removed when he was a teenager, because of an illness. Farida Mintoumba picked up another factoid: that he donated 400 sleeping bags to the poor (though she thought it was 4,000).

The Pope's arrival comes at a difficult time for the Church. Schools are closing throughout the country, including 60 within the New York Archdiocese in the last five years, alone. Expenses have grown as schools hire more laypeople to replace the declining number of priests and nuns. The Church has also been squeezed by settlements from sex abuse cases involving priests.

Meanwhile, enrollment has declined as tuition has gone up. In East Harlem, the church at Our Lady Queen of Angels closed a few years ago to save money. But McNiff, the superintendent, said he thinks the Pope will nonetheless be impressed by what he sees.

"The Catholic church in New York City is able to transition and still carry on the faith and the good work of helping kids understand a relationship with God," he said. "And they’re still getting what I call the tools that they need via excellent academics."

Those tools are supported by the Partnership for Inner-City Education. The organization now manages six Catholic schools and raises money for scholarships, a model other cities are also using. Cee Greene, its director of stewardship, said that the mission hasn’t changed.

"We still serve the immigrant population in East Harlem and Harlem and the Bronx," she explained, adding that about two-thirds of students receive financial assistance. "Our schools are thriving, and even though a parish might close, the community can remain sort of supported. We still service those children."

But some East Harlem residents think there’s something missing. The closure of the church at Our Lady Queen of Angels disappointed many local congregants in 2007. One of them, Gladys Sanchez, said she misses the sound of the bell and going to mass there.

"We need it so bad," she said. "They provide a lot of things for us. They teach us how to do the Rosary. And they provide food for when we don’t have no food. They always give food."

Sanchez said she plans to sleep outside the school before the Pope’s visit and plead with him to reopen the church.