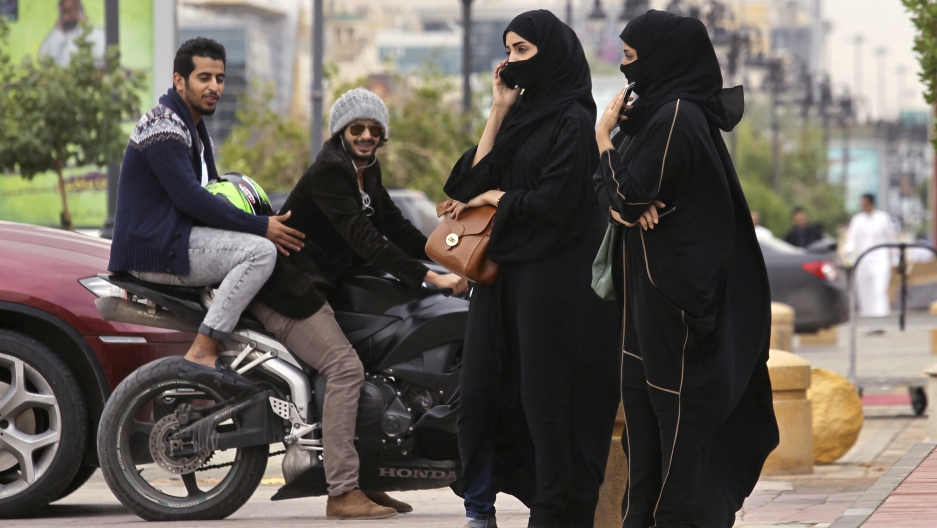 A woman speaks on the phone as men ride a motorcycle on a cloudy day in Riyadh November 17, 2013.

The first two women registered to vote in Saudi Arabia this week.

Jamal Al-Saadi and Safinaz Abu Al-Shamat made history when they registered in Medina and Mecca, respectively. This will be the first election since women were legally given the right to vote by King Abdullah bin Abdulaziz al-Saud in 2011. Four more women registered in Medina and six in Mecca the same day. Women have about two more weeks to register for the coming elections, in December.

Women were also granted the right to run for office in 2011. Candidates cannot register until August 30, but Arab News reported that 70 women intend to run and another 80 intend to be campaign managers. "[Female candidates] will bring a female point of view, demanding certain amendments to laws that are unfavorable towards women" Saudi philanthropist Muna Abusulayman said to Al Jazeera.

Previously women were able to participate in the country's government through the Shura Council, a consultative body that makes recommendations to the king. Thirty women were named to the Council in 2013, but critics argued that women still had no real legislative power. And Norah al-Faiz was the first female in a cabinet-level position as deputy education minister, though she was replaced in a cabinet reorganization earlier this year.

Voting gives Saudi women unprecedented political power. Several local women have created the Baladi Initiative to educate and empower women through the transition. The inititative planned to have educators come from Lebanon, Jordan and the United Nations to teach women how to vote, create a platform and run a campaign, and, eventually, to train them to teach other Saudi women the same.

“Baladi has had a plan to hold several workshops to educate the people about the culture of elections. However, the ministry has stopped us from holding these workshops as they wanted the election program to be more unified and centralized,” said General Coordinator Hatoun Al-Fasi. Al-Fasi has argued that the ministry does not have any alternatives to the Baladi programming and has not done enough to publicize the election.

Women's rights have long been an issue in Saudi Arabia. "Let’s not forget that Saudi Arabian women won’t actually be able to drive themselves to the voting booths as they’re still completely banned from driving," said a spokesperson for Amnesty International. And women that can get to polling places will be going to separate polling places than their male counterparts. In Saudi Arabia today, women and men cannot legally be in the same public spaces, women are not permitted to drive a car, and they cannot get a job, education, be married, or travel without a man's permission. Women may not visit a male doctor without a male guardian.

"Certainly no one is so blind as to believe that this is the only problem facing the women of Saudi and voting themselves into power will change everything," said columnist Sana Zaheer on Muslimgirl. "We can all plainly see that there are many reformations needed to take place before terms like gender equality can fully apply. But to zero-in on the negatives when they have come this far and fought so hard is a slap in the face to the women who risked their lives pushing this movement forward."