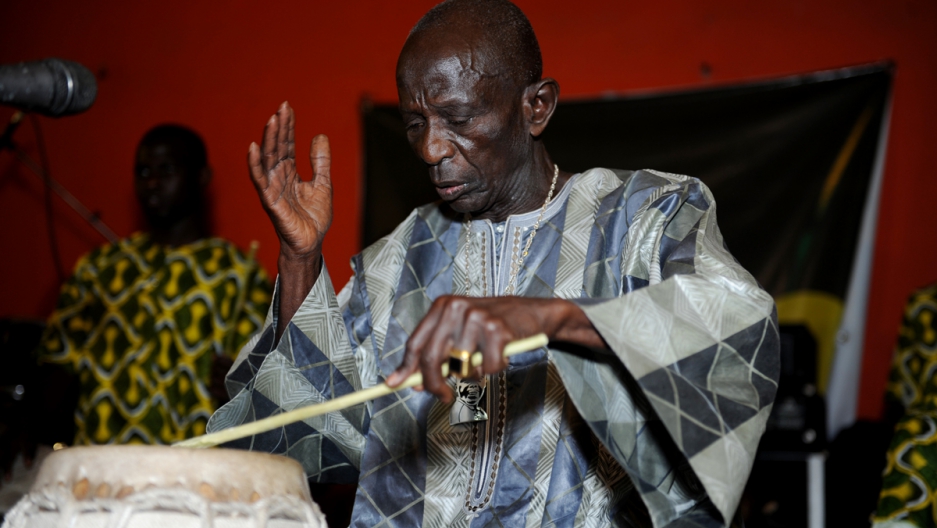 In Senegal, Doudou Ndiaye Rose was considered a master drummer and was recruited to play with serious artists who wanted his drum — the sabar — in their work. Musicians like Dizzy Gillespie, Miles Davis, the Rolling Stones and Josephine Baker all called on Rose.

But perhaps his most personal performances were with his children and grandchildren, sometimes all at once, as he would lead them as an orchestra — 30 drummers up there on stage.

Rose died Wednesday at the age of 85.

Journalist Rose Skelton spent several years in Dakar, and once spent an afternoon with Rose at the homes of two of his four wives.

"He told me to go to a local police station and ask a policeman to bring me there because everyone knew his house," Skeltons says. "I was led by this policeman to [Rose's] house and we had breakfast there with his first wife. I thought the interview would perhaps come after breakfast or during breakfast, but after breakfast he said we’ve got to get on the road and carry on to the next wife’s house where we had lunch."

As it would turn out, Skelton ended up hanging out with Rose for several more hours as he went shoe shopping and went to meetings. "I spent the whole day with him, just sort of going about his business," she says. "It was just fascinating to watch it all unfold."

Rose was a character according to Skelton, but he also had an enormous influence among other Senegalese musicians.

Early on in Rose's career, he was recognized by other musicians as a great treasure. Rose liked to tell the story about when he was 19 and met Josephine Baker. He was playing in a group that was invited to play when her. He overheard her say to the band leader, "please take care of this young man, he’s one of Africa’s future greats."

Skelton says when Rose heard that, it motivated him to do everything he could to be the best. He just wanted to live up to Baker's prediction.

"He was such a special character," she says. "He was a tiny man, very sort of pixie-like. And he just had such energy that people really felt that he was a leader."

Despite Rose's deep embrace of the traditions of Senegalese music, he's known for his collaborations with the Rolling Stones and Dizzy Gillespie. He talked a lot about hip hop and rap. too. Skelton says he was a great admirer of the young hip hop bands in Senegal, but he was quick to point out that Senegalese hip hop and rap really drew on the tradition and rhythms of the sabar drum.

"He loved young people’s music," she says. "He was a very youthful person in spirit. But, he was very close to the tradition."