Dr. Aaraveeti Ramayogaiah, a government doctor in the Indian state of Andhra Pradesh, says he wrote 27 thousand postcards about preventive medicine during his career.

High-tech hospitals are now commonplace in Indian cities. But they’re also expensive, putting them out of the reach of the poor.

Over the course of his career, Dr. Aaraveeti Ramayogaiah wrote about 27,000 postcards to patients and acquaintences. Most of them explained preventive health care practices, like washing hands and boiling water. The postcards were intended to help thousands of people who couldn't afford or easily get to a physician.

In an interview with the Indian journalist Rahul M, Dr. Ramayogaiah said he came from a poor family and became a government doctor at the age of 27.

“He started seeing how health in India was driven by the profit motive, which was largely linked to the pharmaceutical industry,” says Rahul.

The high costs of care inspired Ramayogaiah to take a different approach. He collected the postal addresses of thousands of patients and even strangers. In his postcards, he explained that some health issues — like diarrheal diseases — can be avoided without medical treatment.

He argued that in communities where doctors are difficult to access, residents should focus on improving sanitation and the environment. 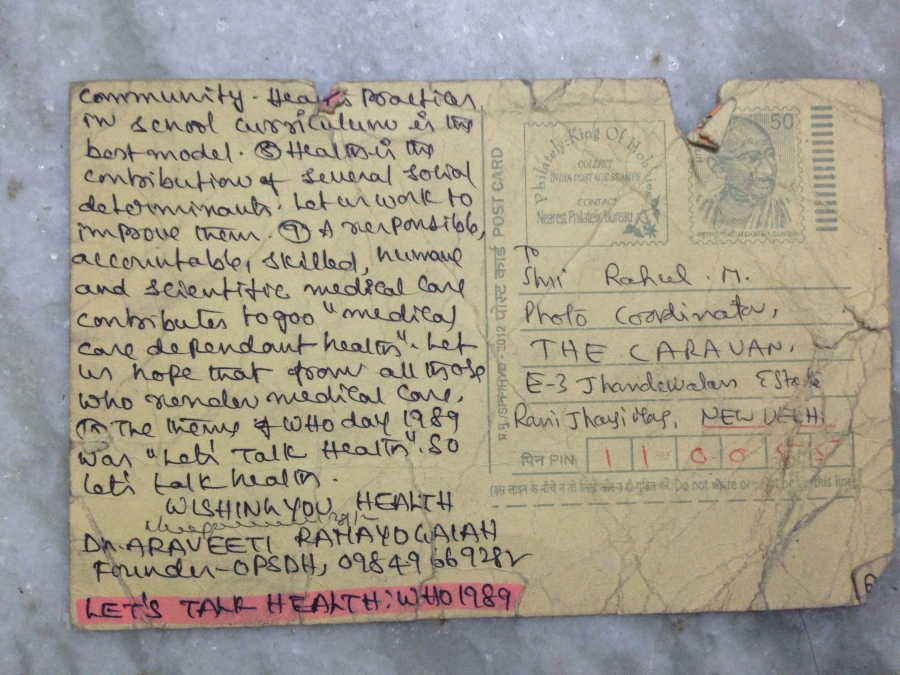 A postcard addressed to the journalist Rahul M.

His postcard campaign and editorials made headlines in Indian newspapers. But he told Rahul that some outlets didn’t take him seriously, because of his rigid stance against high-priced corporate hospitals.

Yet even in his poor health, Ramayogaiah remains skeptical of India’s for-profit hospitals. “He doesn’t want to go to a good hospital to treat himself,” says Rahul.

“He has fought his whole life against the system of corporatization of health," Rahul adds. “Which is the only system that can help him extend his life a little longer. In some sense, for him, his principles were more important than life itself."

Readers, what would you do? If you were stricken like Dr. Ramayogaiah, would you stick by your principles or go to the best hospital you could? Let us know in the comments section below.