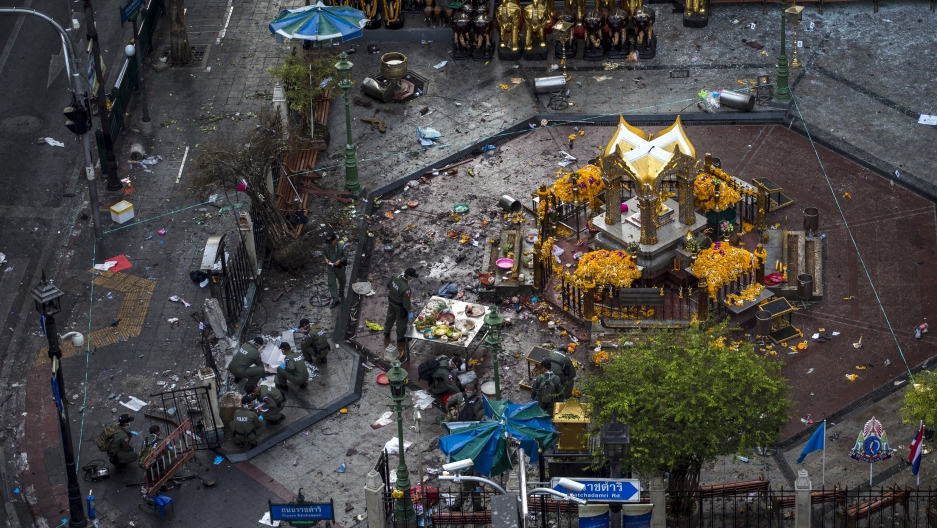 Experts investigate the Erawan shrine at the site of a deadly blast in central Bangkok, Thailand.

The bombing in a bustling Bangkok district on Monday has many people searching for answers. Who would instigate such an attack? What are their motives?

The blast, occurring near a Hindu shrine popular with tourists, left 20 dead and more than 100 injured. Now the police are scrambling to identify the perpetrator of the attack, who was reportedly carrying the bomb in a backpack that he left at the scene.

Many believe the perpetrator belongs to a group with political motives. But who would benefit from such an attack?

“Bomb attacks in general are not unknown in Thailand,” Liow points out. “Various elements, including insurgents operating in the southern provinces of the country, as well as political opponents of the establishment based in Bangkok itself, have periodically used bomb attacks to further their objectives.” But none on such a large and devastating scale as Monday’s explosion.

The location and timing of the attack were quite deliberate, according Liow. “The bomb was detonated just before 7 p.m. on Monday evening, which is the peak rush hour in Bangkok. Quite clearly the people who perpetrated this wanted maximum casualties and maximum visibility.”

Liow says insurgents from the country's south are the first possible culprits. The southern provinces of Thailand have been engulfed in a relentless insurgency for more than 10 years, with many casualties. The Muslim groups from the south may indeed be responsible for Monday’s attack, though Liow wasn't convinced: “The insurgency, by and large, however violent it might be, has been contained in the southern provinces,” he explains. “So if indeed insurgents have decided to take it out of the region, that marks a major departure.”

The bombing might also be tied to extremist groups from outside of the country, “international terrorism rearing its head in Bangkok,” Liow says. But the attack doesn’t seem to correspond to the style of groups like ISIS or al-Qaeda: It wasn’t a suicide bombing, and no one has claimed responsibility.

Finally, Liow says the attack could be connected to political elements who are opposed to the current military junta. Thailand's most recent military coup dates to May 2014. Under the leadership of army chief Gen Prayuth Chan-ocha, the Thai people have violations of their civil liberties, including the suspension of the constitution. The bombing could be seen as an attack on the military junta.

Though it may damage the current regime’s grip on power, Monday’s bombing will also cause great harm to the country’s struggling economy. The tourism industry is vital to Thailand, and it will undoubtedly take a hit: Tour groups are reporting many cancellations and Hong Kong has issued a “red alert” travel advisory warning.

Finance Minister Sommai Phasee told reporters, “We are praying that tourists will forget about this incident by then." Of course, the desire to forget stands somewhat in contrast to the feelings that developed after the 2013 Boston bombing, and the overwhelming emphasis on remembrance. The two tragedies share many similarities, but the prevailing responses diverge significantly.

Remembered or forgotten, the bombing is sure to spark change throughout the country. “The current government claims to have everything under control, but I think there is a lot brewing beneath the surface,” says Liow. “I think Thailand is in for a very rough ride.”