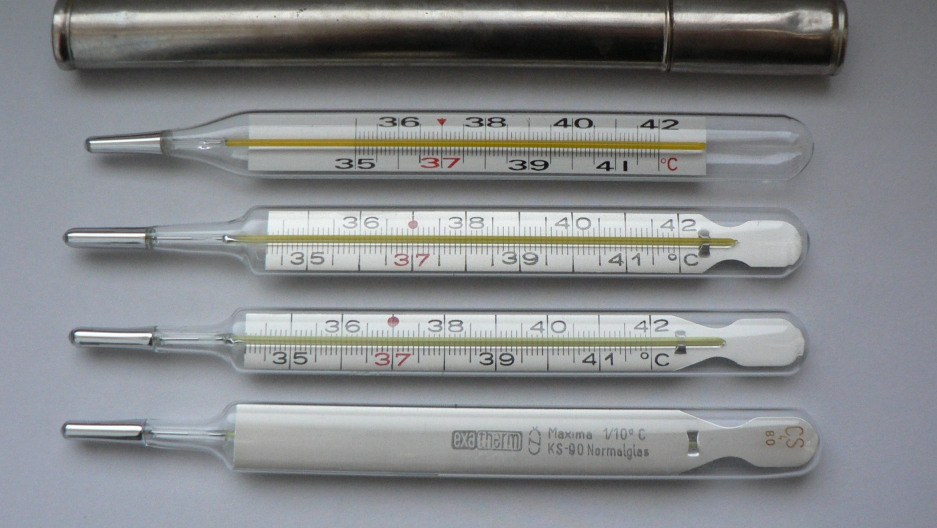 Mercury thermometers have largely been phased out.

In 1626, the French Jesuit Jean Leurechon (1591-1670) first coined the word “thermometer.” It appeared in his best-selling book, Récréation Mathématique, which he wrote under the nom de plume of Hendrik van Etten. (A subsequent English translation was entitled Mathematical Recreations, or a Collection of Sundry Excellent Problems Out of Ancient and Modern Philosophers Both Useful and Recreative).

The term is a compound word consisting of a Greek root and a French suffix, also of Greek origin. The ancient Greek word θέρμη, or therme, means heat, and θερμός (thermos) means hot, glowing or boiling. The second part of the word, meter, comes from the French -mètre (which has its roots in the post-classical Latin: -meter, -metrum and the ancient Greek, -μέτρον, or metron, which means to measure something, such as a length, weight or width).

Though time seems to have forgotten him, Leurechon was a fascinating figure in the history of science and mathematics. His great claim to fame is that his book was a progenitor to today’s popular “crossword puzzle, jumble, and brain-teaser” books — only, his puzzles required an advanced knowledge of algebra, geometry, and even physics. He also included in his book several mechanical, hydrostatics and optics puzzles, many of which he “borrowed” from the works of the French mathematician and Jesuit, Claude-Gaspar Bachet de Méziriac, among others.

According to the Oxford English Dictionary, Leurechon first used the word thermometer in “Puzzle Number LXIX,” which involved an experiment with a cylindrical pipe of glass with a little ball or bowl at the top that used a combination of water and “colored liquor.” The word appeared in a sentence that read,  “Thermomètre ou instrument pour mésurer les degrez de chalour ou de froidure qui sont en l'air” which was translated to: “Of the Thermometer: or an instrument to measure the degrees of heat and cold in the air.”

After “the van Etten” book came out, the word thermometer began cropping up in other scientific treatises. For example, it’s mentioned in Sir Thomas Browne’s 1646 treatise on epidemic diseases, Pseudodoxia Epidemica, and in Robert Hooke’s 1665 masterpiece, Micrographia, the same book in which he coined the word “cell.”

Long before van Etten invented the word, a number of scientists had already developed several types of thermometer-like instruments using different substances and glass tubes to measure the ambient temperature. For instance, Galileo Galilei worked on a water-based thermometer some time around 1595. Duke Ferdinand II of Tuscany introduced an alcohol-based thermometer in the mid-17th century. The great physicist Sir Isaac Newton experimented with a linseed oil thermometer in the early 1700s.

None of these instruments featured a reliably reproducible system of temperature measurement, however, until after 1714, when Daniel Gabriel Fahrenheit, a German physicist, glassblower, and engineer living in the Dutch Republic announced that he had invented a mercury-based thermometer. More important, in 1724, he proposed his famous scale — which we use in the United States to this very day.

Following Fahrenheit’s lead, in 1742 the astronomer Anders Celsius of Uppsala, Sweden, introduced his own scale, which entailed fixed constants. In other words, he proposed an absolute zero, which is what he called the boiling point, and a freezing point, which he set at 100 degrees. These two points were reversed in 1745 at the suggestion of Carl Linnaeus, which is how the scale remains today. Celsius’s colleagues at the Uppsala Observatory took to calling his invention “the Swedish thermometer,” but Celsius preferred “centigrade,” which is Latin for “one-hundred steps.” Others began to refer to it as the Celsius thermometer sometime around 1800.

In the late 1860s, doctors started using thermometers to measure body temperature, especially in patients with fevers brought on by infectious (and other) diseases. Over the past 70 or more years, thanks to the mass manufacture of reliable, cheap Fahrenheit- or Celsius-based rectal and oral thermometers, the devices have become a ubiquitous household tool favored by many a worried parent of sick and febrile children.

Today, the thermometer is the iconic tool for the simple act of “taking the temperature.” But it’s a story that has developed by many degrees.