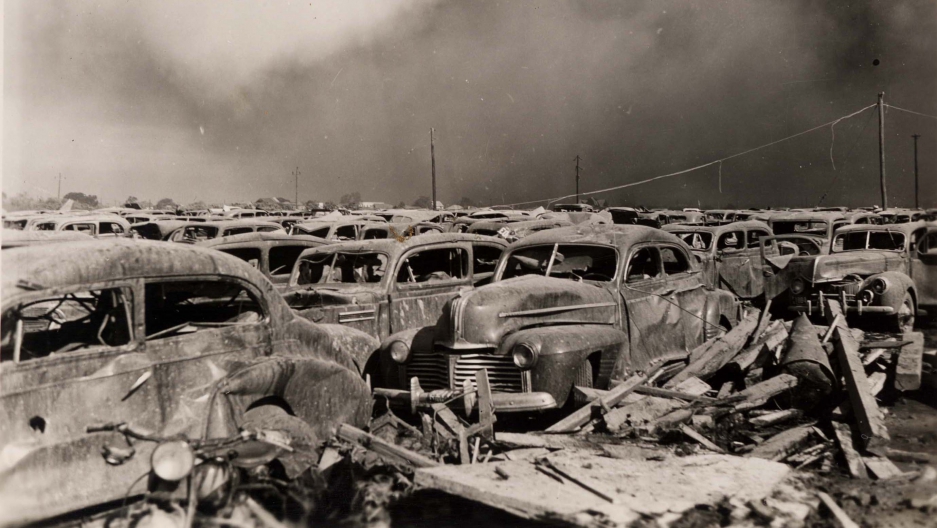 A parking lot 1/4 of a mile from the Texas City explosion was leveled by the explosion in 1947.

A series of explosions in Tianjin, China, last week claimed more than 110 lives and leveled many city blocks. Scores more were injured and the cause of the explosion remains under investigation.

The explosions have raised questions about safety standards in China's rapidly developing economy — and also evoke memories of previous port disasters, many in the US, including one that altered the course of US jurisprudence.

Here are four significant port disasters of the last 100 years:

The SS Grandcamp detonated at 9:12 a.m. on April 16, 1947. The ship contained bags of ammonium nitrate fertilizer, along with peanuts, tobacco, twine and bunker oil. The ship was said to have been launched 2,000 to 3,000 feet in the air. The fire eventually spread to nearby oil storage tanks, leading to additional blasts. Among the dead were all but one of the members of the Texas City fire department. The explosions were among the largest non-nucler explosions ever; according to the Texas City library, the blasts were recorded on seismographs as far away as Denver. In addition to killing hundreds, it leveled dozens of city blocks and led to the first-ever lawsuit by 8,485 victims against the US government under the new Federal Tort Claims Act. Though they lost their case, Congress ultimately awarded nearly $17,000,000 in compensation to victims.

During World War II, African American sailors were forced to perform non-combat, menial labor for the US Navy. Among their tasks were loading ammunition onto ships for transport to the war zones. But at Port Chicago, in the San Francisco Bay area, the sailors were poorly trained — and poorly led by exclusively white officers — and pushed to load ever more cargo into the holds at ever faster speeds. On July 17, 1944, two ships were being loaded at the pier at Port Chicago. Nearly 5,000 tons of explosives were either on the ship or waiting to be loaded. For reasons that will never be fully known, there was a sound consistent with a loading boom collapsing. An explosion following. Then a few second later a larger explosion was reported — so strong that it was felt all the way in Nevada and caused damage across San Francisco Bay in San Francisco. The second explosion registered as a 3.4 on the Richter Scale.

Just a few months before the Port Chicago disaster, on April 14, 1944, a cargo ship being unloaded in the Indian city of Mumbai (then known as Bombay) caught fire and was destroyed in two explosions. The ship, which was loaded with cotton bales, gold and about 1,400 tons of explosives, caught fire and crew and shore support tried to extinguish it, before being ordered to abandon their efforts. The blasts were recorded more than 1,000 miles away. About two square miles were set ablaze around the ship and 11 neighboring vessels were sunk. More than 800 people were killed and more than 2,500 were injured.

On Oct. 4, 1918, a World War I ammunition plant operated by the T. A. Gillespie Company and located in the harbor area of Sayreville, New Jersey, blew up, killing about 100 people and injuring another 100. The blast set the coastal area on fire and leveled about 300 buildings. The fire raged for three days before it was finally brought under control. The exact cause of the explosion has never been conclusively determined, but speculation has centered on, most likely, worker error. At the time, German sabotage was also widely speculated, but no evidence of that was ever found. Nearly a century later, debris from the explosion continues to be found.