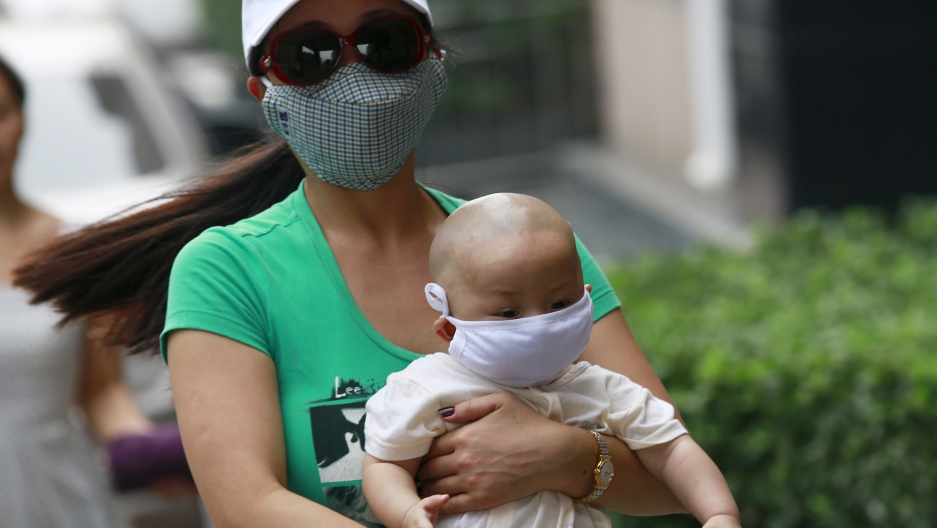 A woman and her baby, both wearing masks, make their way down a street and away from the site of explosions, in Tianjin, China.

There are more questions than answers nearly a week after a devastating explosion in the Chinese port of Tianjin. Hazardous waste crews have been sweeping through the areas where the blasts occurred.

"There are still thousands of soldiers combing through the site, trying to determine what's in the air and water. The latest water samples show 27 times the standards of cyanide,” says Julie Makinen, a reporter for the Los Angeles Times who has covered this disaster.

China has been more transparent with information about this current catastrophe, but Makinen says there's still a lot of "skepticisms and there's so much we don't know — what was at the site, why it exploded and what's still left."

The unknown, she says, has the residents on edge.

More than 110 people are confirmed dead in the blasts with some still missing. More than 700 people were injured and thousands have been displaced.

Those who find themselves homeless now are demanding compensation. Public demonstrations are rare in China, but protesters have been demanding that authorities buy back damaged homes.

The blasts damaged expensive apartments less than a mile from the blast site.

"It's kind of like a giant bomb dropped in the middle of this area and then a tornado whipped around the periphery of it," says Makinen.  The question of who's going to pay for all this is a massive one, she says, because the company in question has been reduced to ashes.