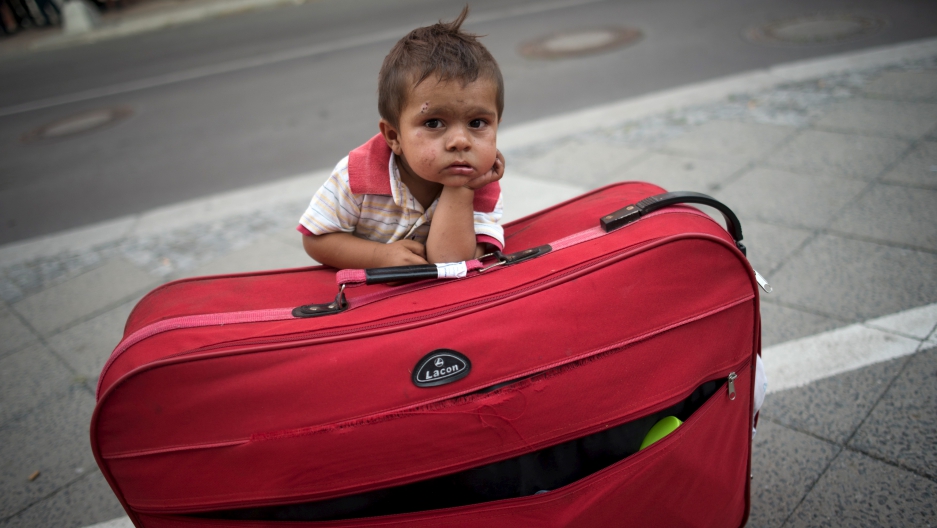 A migrant boy guards his parents' suitcase, as the family waits all day to apply for asylum in Berlin.

Many of the immigrants who've hit the road in Europe are desperate to make it to Germany, where the economy is booming.

But the country is struggling to house a record influx of refugees — a number that's expected to more than double this year to a record 450,000. The surge seems to be stirring up ever more anti-immigrant sentiment, in addition to increasing violence.

A spate of arson attacks in recent months has targeted housing for asylum seekers from Syria and Iraq. Many Germans say the country just can't take any more refugees. But others like Jonas Kakoschke disagree.

"This country is totally able to have more people here," Kakoschke says, "People try to give this message that it's totally not possible to take more people. but it's not. We are really a rich country. We can take more people, and we're responsible for many bad situations in the world, so we have to be welcoming."

One way the Berlin resident decided to be more welcoming was to help create a roommate sharing website called Refugees Welcome. The setup is simple. Those with a spare room can go on the website and submit some information about themselves. From there, the site will try to find refugees who would be a good match.

"We will try to find refugees which can fit to you and you fit to [them], so everybody's sympathetic to each other," Kakoschke says.

On paper, it would be easy to describe Refugees Welcome as an Airbnb for refugees, but Kakoschke stresses that, unlike Airbnb, the goal of his venture is not monetary gain, but getting people to live together and not bringing refugees into empty homes.

"We think it brings the big benefit to refugees that it's really easier and faster to learn German, to feel as a part of our society here."

Kakoschke adds that the effort is also beneficial to Germans — many of whom, he says, have never interacted with refugees.

When it comes to rent, Kakoschke says they usually try to let the government pay, but another method used is something Kakoschke describes as "private micro funding."

"Just write an email to all your friends and family and ask them if they want to support with maybe five euro a month or 10 euro a month."

So far, the site has matched nearly 100 refugees to shared housing in Germany and Austria, where it's been working with a sister organization since January. Out of the 100, Kakoschke says only two have had problems.

"All the refugees are individuals, so it's really depending on this individual person — what can fit and what cannot."

Kakoschke hosted a refugee in his home for six months and says the two of them got along well and were able to find common ground, despite some cultural differences.

"Bakary, my flatmate, he's a Muslim. I'm a non-believer, and when he moved in he just said, 'I hope I don't disturb you when I pray.'  So I was like, 'No, you can [pray] in your room, whatever you want.' And I said, 'I hope not to disturb you when I drink beer or something,' and he was like, 'No, you can do whatever you want.' So I think it's never about religion or where [you're from]; it's always about respect and about dialogue between people."