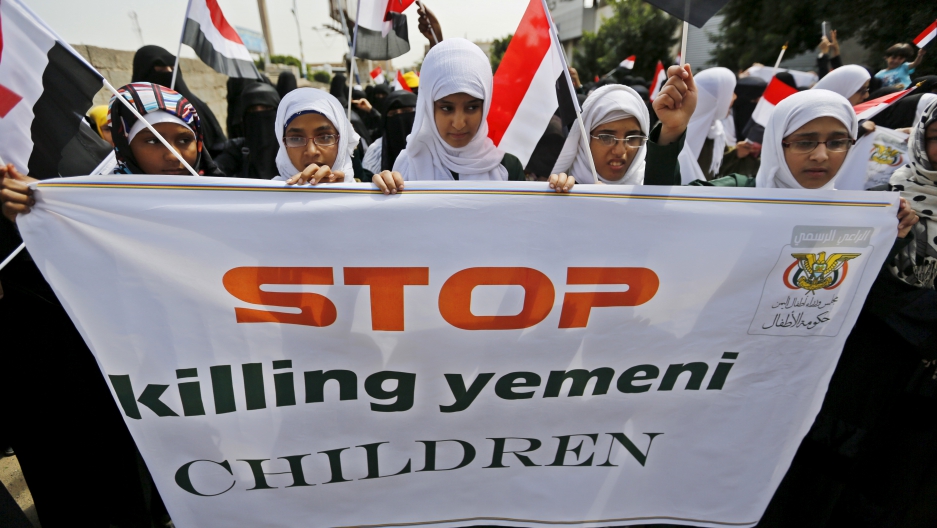 Girls demonstrate against the Saudi-led coalition outside the offices of the United Nations in Yemen's capital Sanaa August 11, 2015.

Operation Golden Arrow, the Saudi-led land invasion of Yemen, has forced a sudden retreat by the rebels who took control of Yemen's major cities this year. The mission to recapture Yemen's national capital, Sanaa, will involve fighting on the ground, but it's the Saudi-led air campaign that worries observers.

Yemeni President Abdu Rabu Mansour Hadi escaped from the capital in March after a group of disgruntled northerners, the Houthis, facing little resistance, seized most government offices. Later it was learned that the Houthi coup was assisted by former Yemeni dictator Ali Abdullah Saleh and military troops still loyal to him. Their combined forces drove southward along the mountainous spine of western Yemen, taking control of the nation's major cities.

President Hadi fled to Saudi Arabia and called on the Saudi government to help restore him to power. On March 26, Saudi and UAE jets launched a punishing air campaign meant to dislodge the Houthis, who by then were consolidating their hold on the southern port city, Aden. In early May, southern secessionists, soldiers loyal to President Hadi and special forces from the United Arab Emirates made common cause to fight off the Houthi occupiers.

What began as a nearly bloodless coup has become a deadly war, with ground fighting and a continuous battering from the sky. The International Committee of the Red Cross estimates that, since March, nearly 4000 people have been killed and more than 19,000 injured. About 1.3 million have been forced to flee their homes.

When Aden was recaptured by anti-Houthi forces in July, the war entered a new phase: a ground campaign led by thousands of troops from Saudi Arabia and the UAE, heavily armed with US-made weapons. "The cost in civilian lives from the ground campaign may be relatively limited," says Michael Knights of The Washington Institute for Near East Policy. "What worries me is that the Saudi-led air campaign is quite brutal. It's not like one of our modern air campaigns with the US or the UK, where we worry about civilian casualties. The Saudis, in many cases, seem to be deliberately causing civilian casualties and certainly are causing civilian suffering by knocking out power stations and other pieces of civilian infrastructure."

In a policy article, Knights writes that the continuing air campaign is causing significant damage to civilian areas and historic buildings, while missing military targets such as "enemy leaders, missiles, troop convoys, and mobile artillery systems." Even so, Knights says the Saudi-led campaign could be within striking distance of the Houthi-held capital, Sanaa, in a matter of weeks.

The Houthis have not given up. But their main ally in the region, Iran, has been thwarted by the Saudi naval blockade that has effectively prevented imports of weapons the Houthis would use to defend their territorial gains.

The naval blockade has also prevented supplies of food and fuel from entering Yemen. Yemen imports most of its food, and Yemenis rely on very deep wells to draw water to the parched surface. Without fuel, water pumps do not operate. Teresa Sancristóval, head of the emergency unit overseeing operations in Yemen for Doctors Without Borders/Médecins Sans Frontières, says one gauge of the crisis is the scarcity of water. "The price of clean drinking water has doubled. It is extremely difficult to get. People are now stealing water from their neighbors because it is so hot there — 52 [degrees Celsius, 125 degrees Fahrenheit] — and not even a fan."

Sancristóval says most hospitals have closed in the northern province of Saada, home base for the Houthis. After Saudi-led air strikes levelled much of the provincial capital Saada City, only two hospitals remain. "There are no materials and no drugs. No X-ray film, no fluids." She says the hospitals can barely treat the wounded, not to mention chronically ill patients. "Without electricity," she says, "oxygen cannot be produced and dialysis machines do not work."

As the Saudi-led ground invasion forces its way north to the Yemeni capital, Sancristóval urges all sides in the conflict to remember the civilian cost, "that they insure access for the population for food and basic needs, and see what the consequences [of continued fighting] are." Asked what message she would give to the Saudis and the western governments that support Operation Golden Arrow, she replies with one simple sentence. "We would ask the parties to respect civilians."

Knights observes that the rising number of civilian casualties in Yemen is a moral conundrum for supporters of the Saudi-led campaign, especially the United States. "The US is in a very delicate position," he says. "By striking the nuclear deal with Iran, the US has made its Gulf Arab partners very paranoid about future US commitment to the region, and so the US is trying to counterbalance that by being a good ally in Yemen. In some ways we are fighting the wrong war against the wrong people," says Knight, "but at this point in time the US has very little choice."