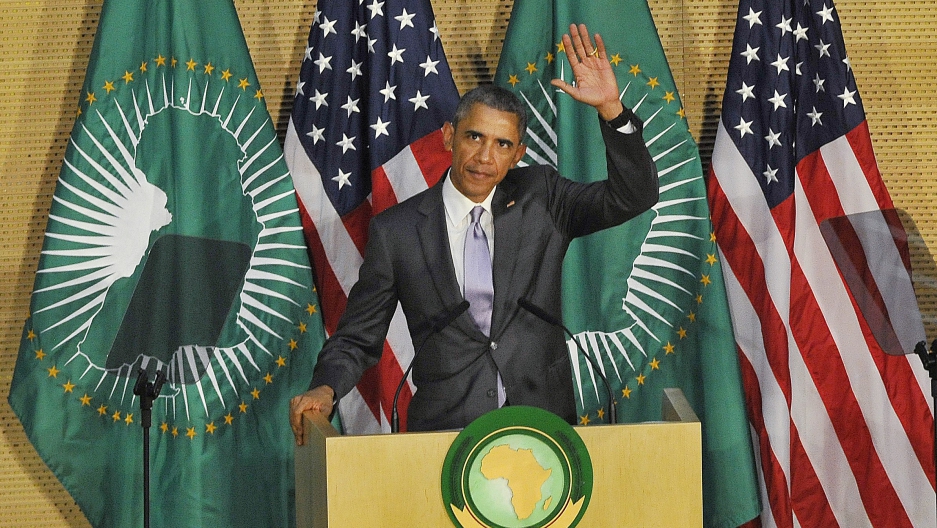 US President Barack Obama addresses African Union (AU) in Addis Ababa on July 28, 2015. Obama arrived at the African Union headquarters today, to become the first US president to address the 54-member continental bloc, at the end of a tour focused on corruption, rights and security.
Credit: Simon Maina
Share

WASHINGTON — Speaking before the African Union in Ethiopia last month, President Obama said, “The most urgent task facing Africa today ... is to create opportunity for this next generation.”

President Obama is right, and the African Union was a strategic place to make the case. We can’t afford to waste the potential of today’s largest generation in human history — in Africa or anywhere. We are in the era of “peak youth,” confirmed World Population Prospects released by the United Nations last month, after which the number of people over age 30 will surpass the number of people below that age, and the time to cash in on a prospective youth demographic dividend will have passed.

We can’t afford to disenfranchise 1.8 billion young people yearning to improve their lives and those of their families, communities and nations. Creating opportunity for youth can create opportunity for us all.

But youth opportunity must come in many shapes and sizes. Educational and economic opportunities are essential for young people’s success and to national growth, however political and civic opportunity are also crucial. While new attention is finally being paid to youth skills and employment in an effort to address the unprecedented employment crisis around the world, the status of youth citizen participation has gone relatively — and at times dangerously — unnoticed.

The UN chose an apropos theme for this year’s International Youth Day, celebrated annually on Aug. 12: youth civic participation. Active societal and political participation by young people is vital to nurturing social cohesion, inclusive development outcomes, government accountability and transparency. And all of those elements are necessary for stability, security and prosperity.

Many of us know from personal experience that the opportunities we had as a youth for meaningful and positive engagement encouraged confidence, commitment and leadership. They also helped us gain all-important “soft” skills like teamwork and time management, and helped set us up for lifelong participation in civic and political processes.

With strength in numbers, youth can be a powerful force to constructively advocate and create solutions to community and national issues through volunteering, advisory councils, voting or serving in elected or appointed office. And indeed, this generation is having an impact at the ballot box. As a majority share of voters, and often first-time voters, election outcomes now frequently rest with young voters.

Though millennials don’t necessarily turn out in the US (just 13 percent of 18-29-year-olds voted in the 2014 midterms), their global peers in many other nations are turning out in record numbers. Given the size of the cohort, even a lower turnout rate can still translate into a number of votes that can swing an election.

In particular, youth are playing a decisive role in many new and maturing democracies, and emerging economies that are especially critical to the regional and global political, economic and security landscape. Over the past couple years, electoral outcomes in Nigeria, Afghanistan, Kenya, India, South Africa and Malaysia hinged upon the youth vote.

Yet, it is troubling that surveys reveal youth still often feel unable to shape their own trajectories, excluded from decision making, and believe their voices remain unheard in larger political and social dialog. Beyond the ballot box, social media and communications technologies provide a space for social and political expression, though these conversations are too often “one way” and do not necessarily translate into meaningful influence or give youth any genuine power over decisions that affect them.

Nevertheless, these outlets or other civic education, structured participation or service learning opportunities are often out of reach to young people in fragile or poorer contexts where they are most needed.

Across 33 emerging and developing countries worldwide, data from Pew Research’s Global Attitudes survey shows that more than two thirds (66.5 percent) of young people age 18-29 do not feel their government cares about what they think. In several nations the numbers were perilously higher including Brazil (90 percent), Tunisia (80 percent) and Ukraine (84 percent).

While throughout history, youth have been at the forefront of civic and political movements, such distrust, marginalization or lack of agency perpetuates apathy and frustration. This often fuels disruptive or even violent behavior along with economic or social instability. Pew Research in Asia found that half or more of the youth in all 11 nations it surveyed believe that "success in life is pretty much determined by forces outside our control." That included 73 percent of young Bangladeshis and 72 percent of young Vietnamese.

Not surprisingly, when I talk to youth and youth activists from around the world and ask what they want and need, they are likely to tell me “a voice” or “a purpose” as much as “an education” or “a job.” This can be seen in youth-led uprisings and demonstrations from the Arab Spring to Ukraine to Hong Kong. Understanding the many aspects and dynamics of youth citizen participation beyond perception and attitudes is no easy task.

Defining, measuring and tracking are even harder — opportunities or “space” can be hard to quantify, and even among more accepted indicators (voter turnout, for example) specific data is not always available.

We do know that despite young people’s ambition and ability to mobilize, age and other barriers keep them from the tables of power when it arguably matters most.

The minimum age to stand for national office is at least 25 in the majority of countries. And statistics on legislative bodies are quite staggering: While half the world’s population is under 25 years old, the average age of a parliamentarian is reportedly more than twice that at 53. Fewer than 2 percent of global parliamentarians are in 20s, and less than 12 percent are in their 30s. And we wonder why young people feel powerless?

The other week, 193 nations momentously reached consensus on a new 2030 sustainable global development agenda recognizing that “young women and men are critical agents of change and will find in the new goals a platform to channel their infinite capacities for activism into the creation of a better world.”

It is in all our interests that these words inspire a new reality, and soon. Despite their horrific crimes, extremist groups like the Islamic State and Boko Haram still attract young people looking for purpose or power from anyone willing to give it to them.

The doors to more positive, influential and responsive engagement must be opened more widely. Youth must have more meaningful and concrete paths to walk.

Nicole Goldin is a leading expert on youth issues in global development and foreign affairs. She served as senior advisor with the State Department and USAID, and is currently professorial lecturer at George Washington University, senior associate at Center for Strategic and International Studies (CSIS), and consults in private practice NRG Advisory. She created the CSIS-IYF Global Youth Wellbeing Index.  Nicole is on Twitter @nicolegoldin.