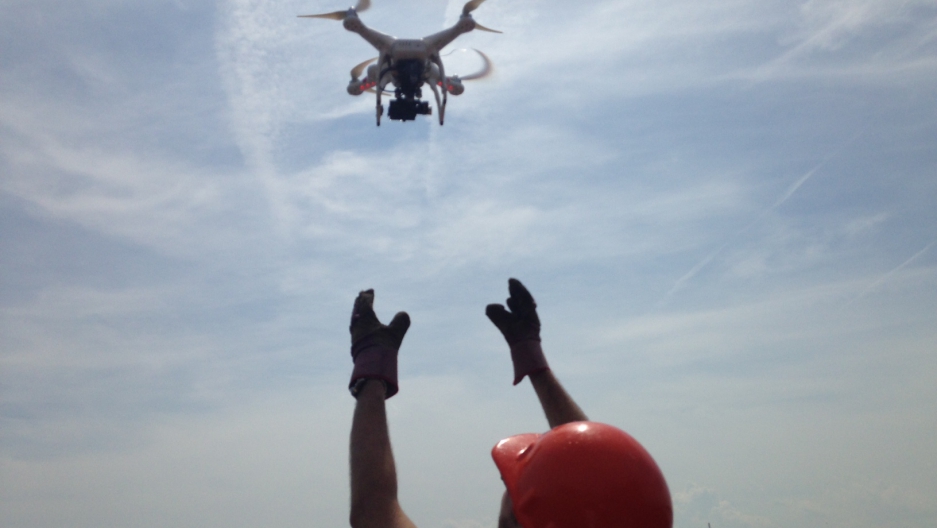 The Snotbot drone is flown about 12 feet above the whale, says Ocean Alliance president Iain Kerr.

Iain Kerr squints in the sun as he fiddles with a small camera mounted to the bottom of what looks like a remote control helicopter with four small propellers — he’s looking for whale DNA.

If you’re getting your DNA tested for some reason, all a researcher or doctor has to do is take a blood sample or even just swab the inside of your cheek. But it’s a little trickier when the research subject weighs more than 400 pounds and lives underwater.

Kerr is among researchers in Gloucester, Massachusetts who have developed a very innovative way to get information about whales.

A clue: It involves a drone. Kerr’s got the energy of a kid messing around with a new toy, but the small drone he’s holding is actually a tool for collecting scientific samples from whales.

Standing on a dock in Gloucester Harbor, Kerr explains how the GPS has to calibrate as he wipes the camera with his T-shirt — which he calls a “very expensive lens cleaner.” He’s also wearing a red baseball hat with the words “Ocean Alliance” — the conservation group he leads.

“We fly a little drone above the whale, about 12 feet above the whale. The whale exhales. It’s called exhaled breath condensate. We like to think of it as snot,” he explains. “And it just gets all over our snot collector on the bottom of our drone, and the drone flies back to wherever we are, giving us this priceless data.”

An innovative research tool like this deserves an equally impressive name. And it has one: Snotbot. 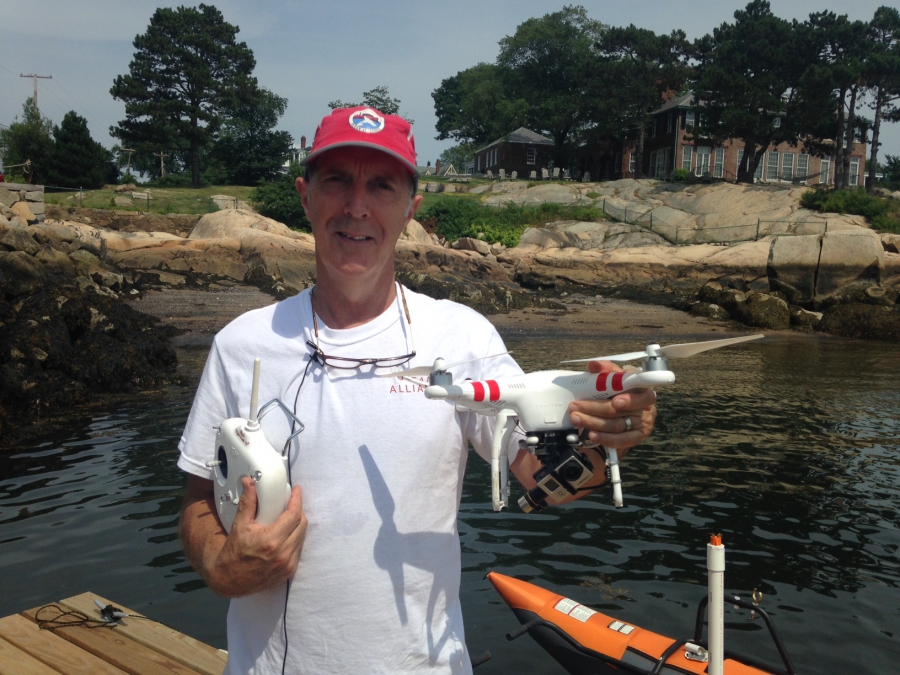 For now, they don’t have the license necessary to try Snotbot out on actual whales in US waters. So they’ve outfitted a small inflatable pontoon boat with a simulated whale spout.

“It’s really just like a potato gun that’s going to shoot water up into the air,” says Kerr.

Of course, the boat and spout have impressive names, too. Kerr explains that today we’ll be using the ‘snot yacht’ and ‘snot shot’ as the whale simulation.

Kerr grabs the remote control. The drone lifts straight up and hovers overhead. He watches a monitor that’s showing him a live video feed from its camera.

“Camera is tilted down now , so I’m looking at the camera,” Kerr explains. “Here’s snot yacht coming into frame. We’re about 12, 15 feet. OK I would say snot yacht, whenever you’re ready, fire.”

Plenty of snot got on the camera.

After a successful test, Kerr maneuvers Snotbot back down towards the dock, and into the hands of a waiting assistant.

Until now, if researchers wanted to get a biological sample from a whale, they had to shoot it with a dart, which can stress the animal.

Kerr followed an unusual path to his job collecting that unusual treasure. About 30 years ago, he was a high school teacher in England, when he went on a trip. He says he was actually hitchhiking around Argentina with two of his friends, one of whom knew of a whale camp in the area.

The whale camp was the research station of Roger Payne, the famous marine biologist who, with his wife, was the first to record the songs of humpback whales.

Kerr had a taste for adventure, as well as a captain’s license for piloting big boats.

Payne said he was looking for somebody to take a boat to the Galapagos who had a license, but didn’t need to get paid, says Kerr.

Of course Kerr jumped at that. Payne later went on to found Ocean Alliance. The group is hoping to take the Snotbot on expeditions off Alaska, Mexico and Argentina, and has begun a Kickstarter campaign to raise money online. (UPDATE: on Tuesday, August 29th, the Ocean Alliance received enough backers for their Kickstarted to be funded.)

He says what’s happening with whales, especially what’s stressing them, is crucial right now, because they’re under so many threats.

“We’ve got ship strikes, we’ve got entanglement in nets,” says Kerr. “We’ve got what we call acoustic bleaching that’s coming from sound that humanity’s putting in the ocean, because we’ve got freighters going everywhere.”

All that noise fouls up the ability of whales to communicate over long distances. Kerr says whales are also a barometer for the health of the ocean.

“You know these are an animal at the top of the food chain so you get bio-amplification of these poisonous substances,” says Kerr. “And then actually we’ve got habitat loss through climate change or through ocean acidification. “

And even though what we’re learning may not be great news, Kerr’s optimistic that the research they’re doing might help make a difference.

“Whales, alas, are not saved,” Kerr says, “but I think we have the technology to learn about them, you know, to solve these problems.”