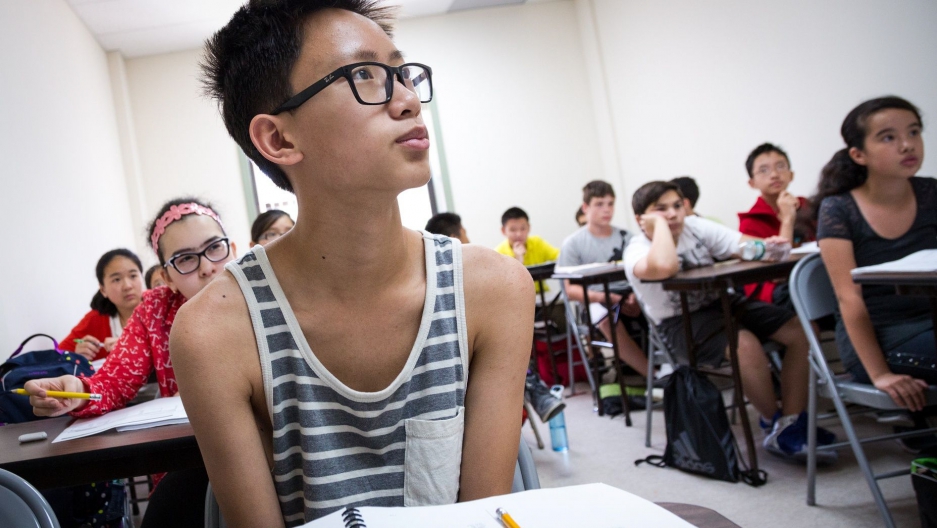 Students at A+ Academy tutoring center in Brooklyn take daily summer classes to help prep them for the exam to get into one of the city's elite public schools.

SHSAT is an acronym for the Specialized High Schools Admissions Test. It's given to eighth graders in October and determines who will get into New York City's eight most competitive schools, which include Stuyvesant and Bronx High School of Science — considered the Ivy League of public high schools.

Almost all of the kids at Khan's are Bangladeshi American. Like other Asian immigrants, they know tutoring can make a huge difference in passing the test. This helps explain why Asians now make up more than half of the students admitted to specialized high schools this year, even though they account for just 15 percent of the city's public school students. 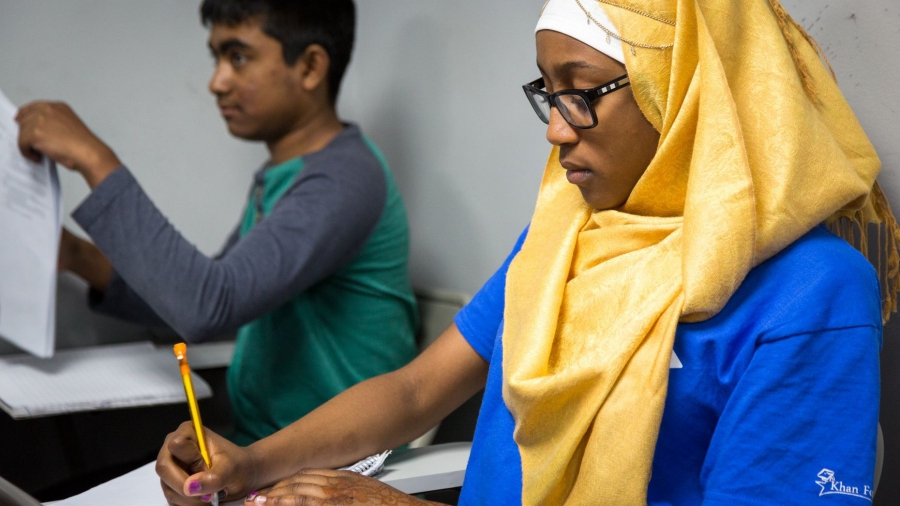 No lazy summer here. Some students in New York City spend their summers at tutoring centers to prep for the Specialized High Schools Admissions Test, a make-or-break exam for getting into the city's top public high schools.
Credit:

Ivan Khan, whose father started Khan's Tutorial 21 years ago while working as a high school teacher, said Bangladeshis are among the fastest-growing immigrant groups in New York and their "very robust and dynamic media and press" help spread the word about the importance of tutoring for the SHSAT. His company places full-page ads in Bangladeshi newspapers with the smiling faces of students accepted to the schools.

Khan's now has 10 tutoring centers in neighborhoods throughout the city, mostly in areas with large South Asian immigrant communities. Bangladeshis are following the same path set by Chinese and Korean immigrants, who have opened their own tutoring companies throughout Brooklyn and Queens. Lulu Zhou, whose family started the A+ Academy more than 20 years ago, said demand is high in these communities because of a long tradition of tutoring. "They come from a culture where this is the norm," she explained. "They come from a culture where this is something that everybody goes to."

Schools in China, Korea and Japan are so competitive that Asia represents the fastest-growing market for private tutoring, according to a 2014 industry analysis.

But while Asians make up the majority of kids attending the elite high schools, blacks and Latinos are barely visible — just 12 percent of those admitted this year, even though they make up 68 percent of public school students. That skewed figure has led to a big debate about whether the city should continue relying on a single test to determine admissions, with Mayor Bill de Blasio proposing other factors, including grades and attendance.

Those involved in the tutoring business believe the deck is stacked because too many smart kids don't even know about the importance of test prep.

While certain Asian immigrants have created a pipeline of tutoring centers, educators say black and Latino students often don’t have the same networks in their communities. "I think there’s a belief in the cultures and different cultures that the school system will provide everything that the kids need to be successful," said Sam Adewumi, a graduate of Brooklyn Tech, one of the elite public schools. He is also a math teacher there now. Adewumi, 49, was born in Nigeria but grew up in the Bronx. 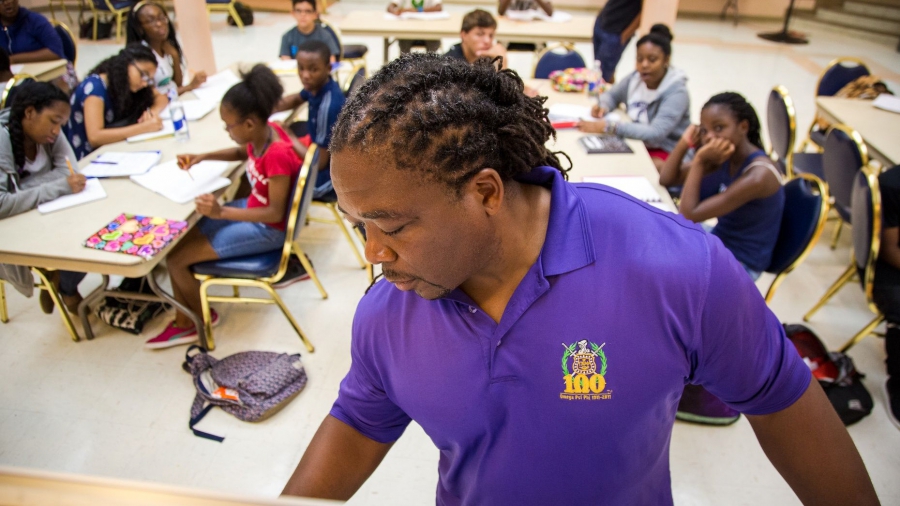 "I think our kids walk in there and get destroyed by that test," he said.

Adewumi started his own business a couple of years ago in Bedford Stuyvesant to prepare underrepresented minority students for the SHSAT. It expanded this summer to include 25 rising eighth-graders, all black and Latino, taking weekday classes in a church basement.

One of the students, Andrew Hall, said he was surprised by algebra and logic questions he’d never seen before. "Based on what I learned in school during the school year, I thought I could use that to take the test," he said. "But from going here I know it’s not just that."

1. In most dictionaries, the first meaning listed for “bluegrass” refers to a bluish-green mass frequently grown in Kentucky; the second meaning usually refers to a type of country music.

_____ Q. You won’t hear that style at any of the dozens of traditional bluegrass festivals held each year across the United States.

_____ R. Included among the non-amplified strings will be guitars, banjos, mandolins, and fiddles, but never drums or accordions.

_____ S. If, on the other hand, either the instruments or the music is non-traditional, the music may be called “newgrass.”

_____ T. The traditional rapid-fire bluegrass sound that was Monroe’s trademark is played on non-amplified stringed instruments and features free improvisation.

_____ U. The connection between those two meanings is a band called the Blue Grass Boys — named in honor of the state of Kentucky — whose leader, Bill Monroe, effectively created this style of music

Based only on the information above, which of the following must be true?

A. If I cannot ride my bike, then it must be dark.

B. If I cannot ride my bike, then it must be snowing.

C. I do not have a headlight on my bike.

D. If I ride my bike, then it is not dark or snowing.

E. If it is snowing, then it must be dark.

Based only on the information above, which of the following statements must be true.

F. Skydivers are less afraid of heights than are non-skydivers.

G. A person must make three parachute jumps a month in order to join the Skydiving Club.

H. Some people who are afraid of heights make three parachute jumps a month.

J. Most people who are not afraid of heights are in the Skydiving Club.

K. Every skydiver makes at least one parachute jump a month.

4. Jack scored a mean of 15 points per game in his first 3 basketball games. In his 4th game, he scored 27 points. What was Jack’s mean score for the 4 games?

Using the conversions above, how many dalts are equivalent to 1 rick?

2. D - The problem says that either of two circumstances, snow or darkness, will prevent me from riding my bike. We do not know whether these are the only two circumstances, because the information given does not say so. Therefore, you can rule out Options A and B. Option C is not mentioned, and E incorrectly combines two pieces of information. D is correct. If I ride my bike, then it is not snowing; otherwise I cannot ride my bike. Nor is it dark; if it was, I cannot ride my bike.