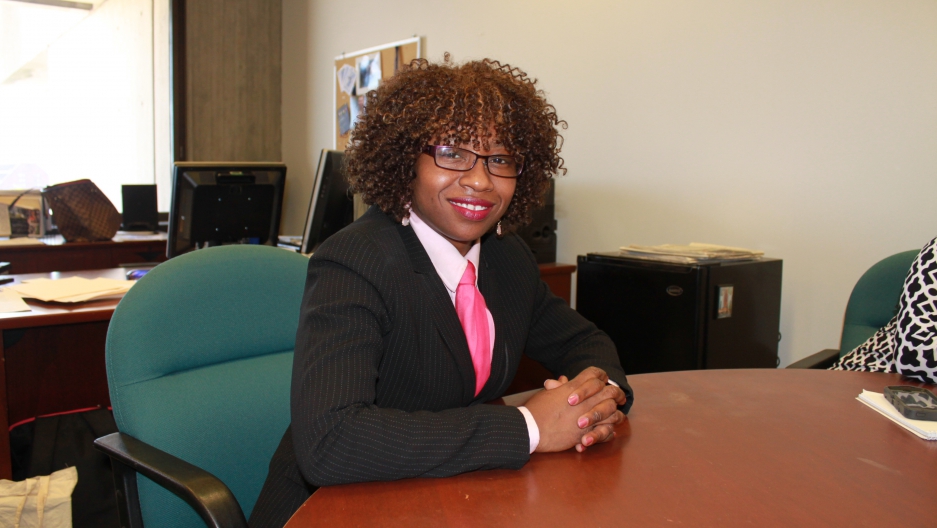 Atyia Martin, Boston's first Chief Resilience Officer. The position is funded by the Rockefeller Foundation as part of its global network of 100 Resilient Cities.

If you could pick someone to help your city prepare for the crises and disasters of the future, you might choose someone like Atyia Martin.

At 34, she’s done stints in the Air Force, at the FBI, with the Boston Police, in the Mayor’s Office of Emergency Management. As director of the Office of Public Health Preparedness, she was in the thick of the city’s response to the Boston Marathon bombings. Last year she finished a PhD on the factors that make people vulnerable in emergencies. It’s not what she thought she’d be doing when she was little.

“In elementary school I wanted to be an ornithologist,” she tells me.

Instead she finds herself taking on the new job of Chief Resilience Officer for the City of Boston, where she was born and raised. The position is funded for two years by the Rockefeller Foundation as part of its 100 Resilient Cities project. When all the cities are chosen, Martin will have 99 counterparts around the globe with whom to share information and technical expertise on everything from rising seas to counterterrorism to economic development. As part of figuring out Boston’s vulnerabilities, Martin intends to drill down on one of Boston’s most vexing attributes: racial segregation.

“The mayor has been specific about wanting to do work around race, understanding race and having racial dialogues to figure out the root causes of the social circumstances people are facing in our communities,” says Martin.

Specifically, Boston Mayor Martin J. Walsh has called for a conversation about the school busing crisis of the 1970s, an attempt at desegregation that backfired and left a bitter legacy.

“One thing we don’t want to leave behind are the difficult conversations we’ve been avoiding for the past 40 years,” Walsh told the audience at a 100 Resilient Cities workshop at Faneuil Hall in May.

Walsh wants to look at the city’s “deepening disparities” and focus on what he calls “social resiliency.” That makes sense to Rockefeller Foundation President Judith Rodin, author of "The Resilience Dividend: Being Strong in a World Where Things Go Wrong."

“There’s lots of data in fact that communities that are more cohesive, that have more community trust, do better, and rebound more effectively, after a disaster," Rodin says. "We saw that post-Sandy.”

For Atyia Martin, who starts her new job at the end of the month, part of what’s refreshing about her mandate is the focus on day-to-day life.

“Usually when you hear talk about resilience, you hear that it is the ability to cope with, adapt to, and recover from emergencies," Martin says. "For us, we’re looking at the connection between day-to-day life and how people fare after emergencies. That’s the distinct piece of it that’s different from emergency management or homeland security.”

Atyia Martin is a fascinating figure, in part because she seems made for the job: part systems manager, part data nerd, part social worker. She was clearly deeply affected by her experiences after the Marathon bombings, when she coordinated support operations for survivors, health care professionals and first responders.

“In my position I’m generally in an operations center juggling information and resources and trying to get people, mostly organizations, what they need. After the bombings I spent a lot of time engaging with individuals.”

In particular she remembers the ceremony for survivors and victims just before Boylston Street opened back up to the public. Martin met with the family of Lingzi Lu, the Chinese Boston University student who died in the attack.

“They found the police officer who had been with her as she died, and to witness the officer talking to the family about the last words their loved one heard, their child heard, as a parent that was very difficult for me. In the moment you know you stay professional, but it really gets to the reason why we do this work, because people are hurting in this city, whether you’re talking about the Boston Marathon bombings or whether you’re talking about shootings that happen in the city,  or you’re talking about some of the other national news that happens around shootings of young black men in the community. All those things affect people in their day-to-day lives.”

It’s not a coincidence Martin brings up the shootings of young black men in the same breath as talking about the Marathon. Mayor Walsh does it, too.

“After the 2013 Boston Marathon bombings, we rallied as a city to support the victims and overcome fear," Walsh told the audience at that Faneuil Hall workshop. "But some people asked very hard questions about why we don’t rally the same way against violence in communities of color."

Atyia Martin says there’s “an undertone of psychological trauma” in the city.

“When you think about racism, when you think about the day-to-day trauma that people deal with, whether it’s suicides, drug overdoses, shootings in our community,  or homicides that are happening, all the way to big disasters like the Boston Marathon bombings, there’s this place for us to build the type of coping skills to help us in all those difficult circumstances,” she says.

Through 100 Resilient Cities, Martin will soon find herself able to pick up the phone and talk to colleagues all over the world about these challenges. She's excited about that shared learning.

“There’s something special about when people come together for a similar mission and are going through the same experience," Martin says. "It’s similar to being in the military.”

One of the other cities in the Rockefeller network is Belgrade, Serbia. That seems fitting,  since Martin spent a year of her life, eight hours a day, learning Serbian-Croatian when she was in the Air Force. Just one more detail of a remarkable career that's about to get even more interesting.