Large quantities of seaweed blanket the beach in the Mexican resort city of Cancun.

If you were planning on going on vacation to the Caribbean, maybe you should check first. Are those beaches still stinky and covered in rotting seaweed?

The algae is part of a family called Sargassum and it is carpeting beaches in tourist hot spots like the Dominican Republic, Barbados and Mexico's Yucatan Peninsula.

The algae can form a pile up to 6- to 10-feet-high on some beaches, making Caribbean countries worried (sniff!) as tourism grows toward the end of the year.

Did smelly seaweed ruin your vacation?

Sargassum is blanketing beaches in the Dominican Republic, Barbados and Mexico's Yucatan Peninsula. Is there any by you?
Submit your seaweed photos

“These seaweeds have been around for a long time. They were first encountered by Columbus but really since 2011, we’ve been seeing an extreme amount of biomass of this seaweed coming ashore the beaches all around the North Atlantic region and the Caribbean. And 2015 was a particularly bad year,” says Brian Lapointe, research professor at Florida Atlantic University. 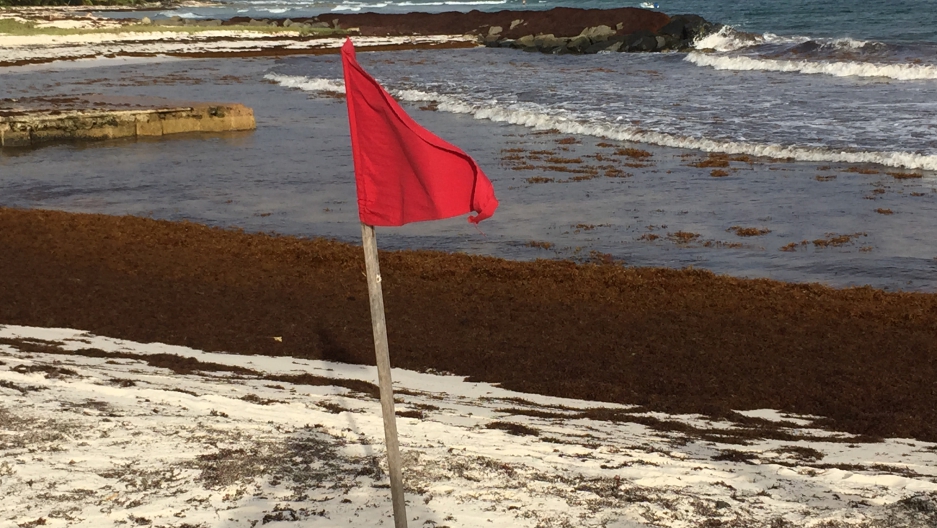 “[The seaweed] can form dead zones as it rots along the land sea interface. All that biomass consumes oxygen and kills fish. These blooms of Sargassum have killed large adult sea turtles in Barbados and obviously become a problem for the little juvenile sea turtles that are coming off the beaches at this time of the year. Their nest is buried in this huge amount of biomass,” Lapointe says.

Research shows that nitrogen and phosphorus coming from river discharges, like the Mississippi River, allow Sargassum to grow in very low nutrient water.

“The nutrients may be increasing to a point where they’re fertilizing this seaweed, allowing them to grow faster and reach a greater amount of biomass,” Lapointe says. And he notes, the seaweed now often sticks through the winter months, the peak of the Caribbean tourism season.