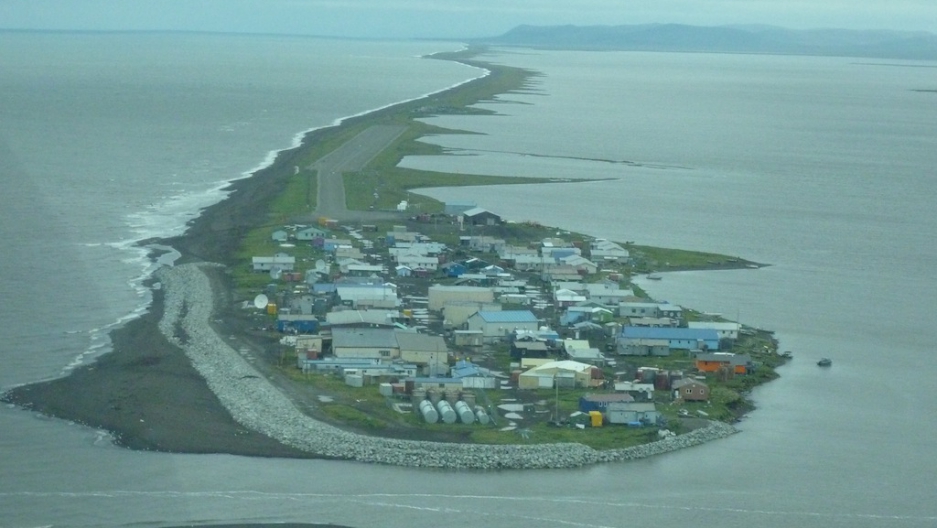 An aerial view of Kivalina, Alaska, which is threatened by rising sea levels in the Arctic.

Scientists estimate that due to climate change, the village of Kivalina, in northwestern Alaska, will be underwater by the year 2025.

In 2008, the Inupiat village sued 24 of the world's biggest fossil fuel companies for damages. In 2013, the Supreme Court refused to hear the case and the village has declared it will not file a new claim in state court.

Meanwhile, nature, heedless of humankind’s eternal squabbles, goes about its business: the sea around Kivalina continues to rise, the storms get stronger, the ice gets thinner — and Kivalina's 400 residents must grapple with how to relocate in the decade they're estimated to have left.

Kivalina is on a very thin barrier reef island between the Chukchi Sea and the Kivalina Lagoon, in the northwest of Alaska, above the Arctic Circle. It takes three plane flights to get there: one to Anchorage; another to a town called Kotzebue; and a third, aboard a tiny cargo plane, to Kivalina.

Kivalina City Council member Colleen Swan says the people of the village rely for food mostly on what the environment, especially the ocean, provides for them. “It’s been our way to make a living for hundreds of years,” she says. “During the winter months the ice is part of our landscape, because we go out there and we set up camps and hunt, and it's all seasonal. We were able to see the changes years ago.”

In May, June and July, the men of the village go out on the ice hunting bearded seals. They cut up the seals, dry them and store them for the winter. “That provides the winter supply,” Swan says. “That’s what keeps us warm in the Arctic.”

About 15 years ago, the villagers noticed the season started two weeks early and the ice began to thin sooner than before. “We didn't notice at first the gradual change until it became two weeks early consistently from year to year,” Swan says. Now, she says, the hunters must remain vigilant, keeping a close eye on the ice, the seals and the sea. If they don't, they could miss the hunting season. “The hardest one to swallow was the fact that our ice wasn't safe any more for us to set up whaling camps,” Swan says.

The Arctic is warming about twice as fast as the global average, so sea ice is forming on the Kivalina coastline later in the year and melting faster in the spring and summer. The lack of sea ice makes the island vulnerable to erosion from storms that occur regularly in the fall. Lack of sea ice also means warmer waters, which increase the severity of storms that hit the island.

The 2008 case against the fossil fuel companies was a 'public nuisance' claim that accused them of inflicting 'unreasonable harm' upon the villagers because they are among the world's largest contributors to greenhouse gas emissions. Climate science is nearly unanimous on the point that increased greenhouse gases emissions are leading to sea level rise around the world.

The village originally voted to relocate as far back as 1992, but it is massively expensive. Their court case against the fossil fuel companies sought damages to help pay for the residents’ relocation. Now, with the case dismissed on the basis that its claims comes under rules of the Clean Air Act and not federal tort law, the villagers have nowhere to turn except the government. They did get a $500,000 grant last month from an arts organization to study relocation, but in general, no dice.

“Whenever we bring up relocation or climate change and ask, ‘Where do we go to talk about this with the government,’ the reply is always, ‘There's no agency set up to address those questions,’” Swan says.

Christine Shearer, who wrote about Kivalina's legal case in her book, Kivalina: A Climate Change Story, agrees. Disaster management policies are designed to deal with the aftermath of a disaster, she says. A disaster declaration releases funding aimed at helping a community rebuild or relocate within the place the disaster occurred. But there are no policies in place to relocate an entire community, like Kivalina, prior to an actual disaster.

“We don't have a federal agency in charge of that, and so it's really fallen on the people of Kivalina and other Alaskan natives in a similar situation to try to put that together themselves, and that's quite a task,” Shearer says.

Interior Secretary Sally Jewell visited Kivalina earlier this year and Colleen Swan sees some hope in that. Jewell’s visit was intended to raise awareness of Kivalina’s plight and to highlight that in the coming decades numerous other towns along US coastlines may face the same problem.

“More communities, more cities, more states, more tribes are going to have to deal with trying to help people who are being affected by climate change,” Christine Shearer says. “I think more lawsuits will be filed, and I think it might get to a point where fossil fuel companies might find it's less costly to settle than to keep fighting these lawsuits.”

Swan says she is exhausted by the stress of watching her community wash away and wondering whether they will need to evacuate. “We just had a minor storm last fall and I'm one of the first responders if anything goes wrong, so I keep an eye on things,” she says. “When we got that storm last fall, I decided I'm just going to go to sleep. I'm tired of worrying, I want to get some rest.”

“The next morning when I woke up, I saw the impacts from a minor storm and how quickly the water rose, and I realized that was a very dangerous thing for me to do, to sleep, to not face the reality of that night,” she continues.

“I realized this is what climate deniers do — not us. Not us, who face the reality every day. We wake up to it. There was never a debate for the people of Kivalina. We just wake up to it every morning.”