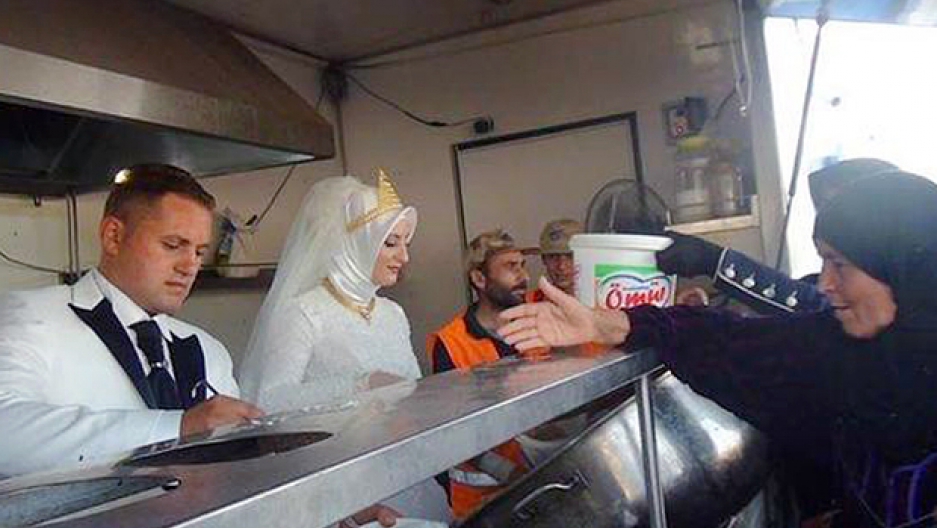 Who says a wedding has to be all about the bride and groom?

"Turkish weddings are usually all about the couple. There's lots of food, lots of dancing.  It's a huge affair,” says reporter Dalia Mortada.

One Turkish couple, Fethullah Üzümcüoğlu and Esra Polat, decided to forego the money that would have gone for a lavish wedding and use it instead to provide dinner for about 4,000 refugees from Syria.

The idea actually came from the groom's father, who's an active member of the Kimse Yok Mu, a Turkish charity that helps thousands of refugees.

Mortada says the bride and groom thought, 'why not?'

"Eventually, they warmed up to the idea and the bride in her wedding gown and her tiara, and the groom in his white tuxedo, went down to the food distribution center and handed out cooked food to  Syrian refugees. And they've really won over hearts all over the world."

Despite the feelings of goodwill toward the couple, there are still tense relations between the Turks and the Syrians.

There's this nervousness among the local population, Mortada says. "They're asking, 'How long are these people going to stay here? Are they going to drain our resources? Our economy? Are they going to take our jobs?  Who’s going to be in our schools?'"

The refugees live along the Turkish Syrian border, where they've settled after fleeing their country because of a Syrian Civil War that broke out in 2011.