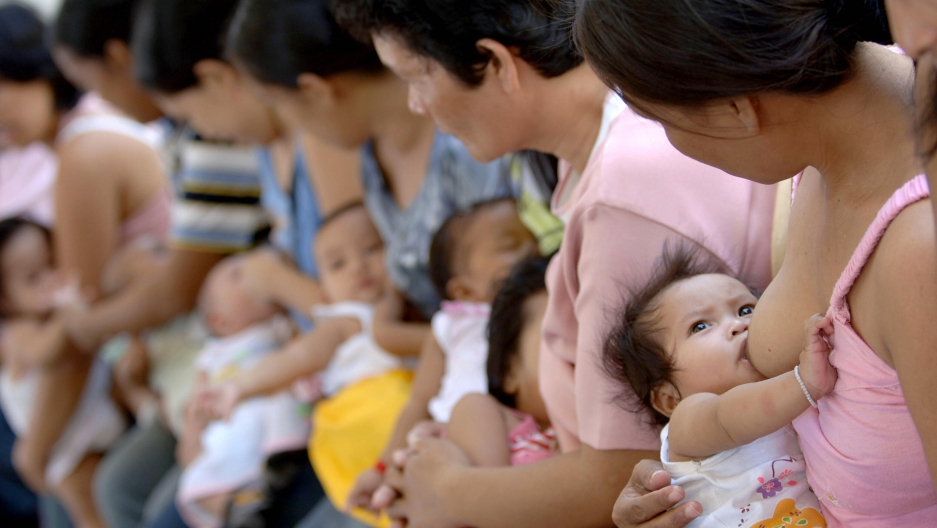 Breast milk: possibly the only miracle diet that's ever worked.

According to the latest research, breastfeeding has benefits from the earliest hours right into adult life. It's associated with everything from better resistance to disease to healthier bodyweight, stronger academic performance to higher earnings.

The World Health Organization (WHO) recommends that all babies get only breast milk for the first six months of their life. And yet, only 38 percent of them do.

Some countries have to work harder than others to convince and enable mothers to breastfeed. In many poorer countries, where breastfeeding rates are highest, the savings on baby food are a compelling reason on their own. Other governments have gone all out to persuade women that breastfeeding is not only the healthiest option, but one that won't cost them their job — or their dignity.

In honor of World Breastfeeding Week, we look at the countries that have done most to make breastfeeding easier, more comfortable and the norm. 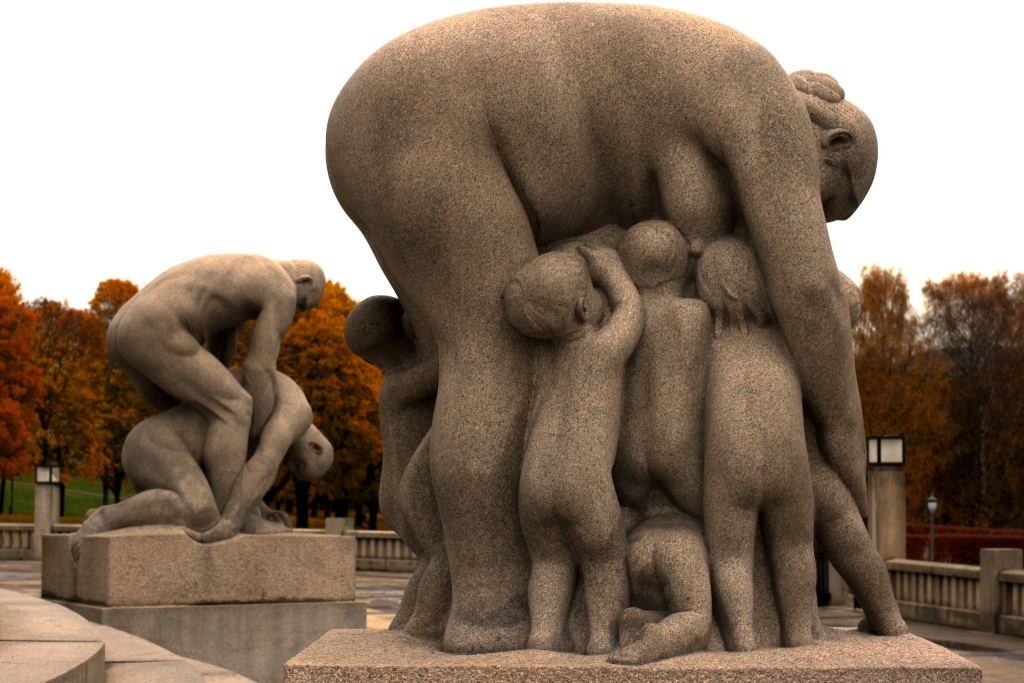 It's no surprise that a Scandinavian country tops the list of pro-boob places. Like its neighbors Sweden and Denmark, Norway is generous with parental leave: Mothers and fathers can take up to 49 weeks on full pay or 59 weeks on 80 percent pay. That immediately helps remove one of the major barriers to exclusively breastfeeding babies for their first six months or more: going back to work. When women do return, they are entitled to nursing breaks throughout the workday for as long as they choose to breastfeed their child. What's more, some 80 percent of Norway's maternity hospitals are certified "Baby Friendly" by UNICEF and the WHO, meaning that they refuse to accept free infant formula or bottle-feeding equipment from private companies and that staff are trained to help women to breastfeed right from within half an hour of the birth to several weeks after they've left the hospital. The result is the highest breastfeeding rate of any developed country: 99 percent of babies born in Norway are at least partially breastfed, 80 percent of them to six months or beyond. 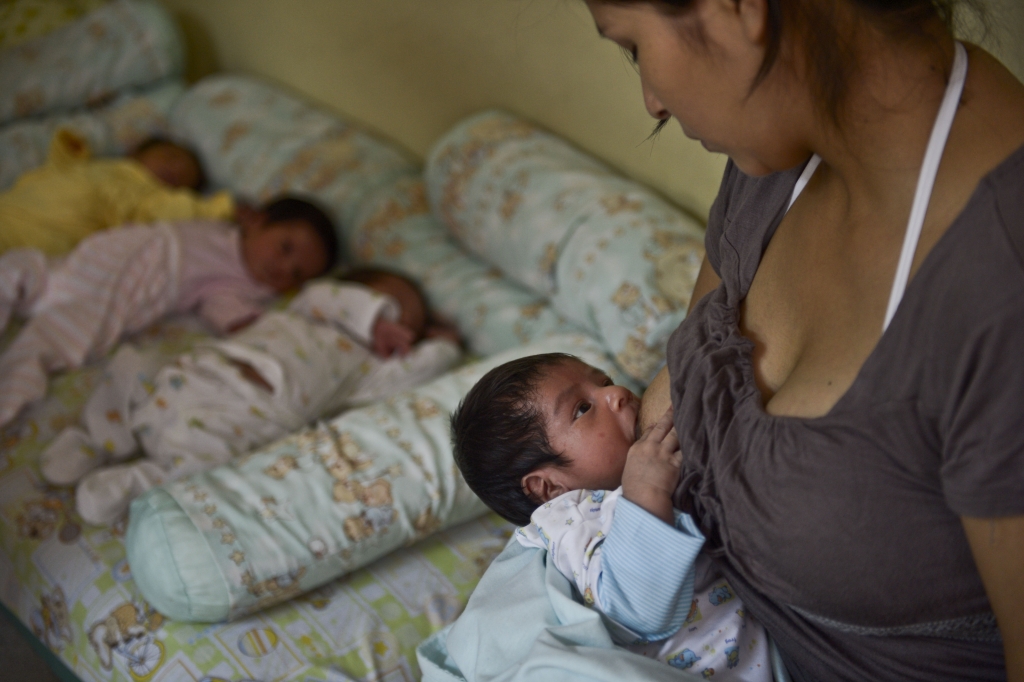 A woman breastfeeds her child as she waits to donate milk at a human milk bank in Lima, on January 31, 2013.

Faced with high rates of malnutrition among its children, Peru's government has made breast milk a policy priority. Since the 1990s there have been concerted efforts to train health workers to encourage breastfeeding and expand support availability, as well as a workplace code that entitles women to paid nursing breaks until their child is 12 months old. Breastfeeding mothers are virtually hailed as heroes. Each August during World Breastfeeding Week, the Ministry of Health organizes contests in which women compete to see whose baby suckles the longest in a single sitting. (The "Baby with Best Suck" wins a goodie bag of food and household items.) The campaign is paying off. In 1992, below 20 percent of babies were exclusively breastfed for six months. By 2012 the rate was up to 67.5 percent, making it one of the highest in the world. 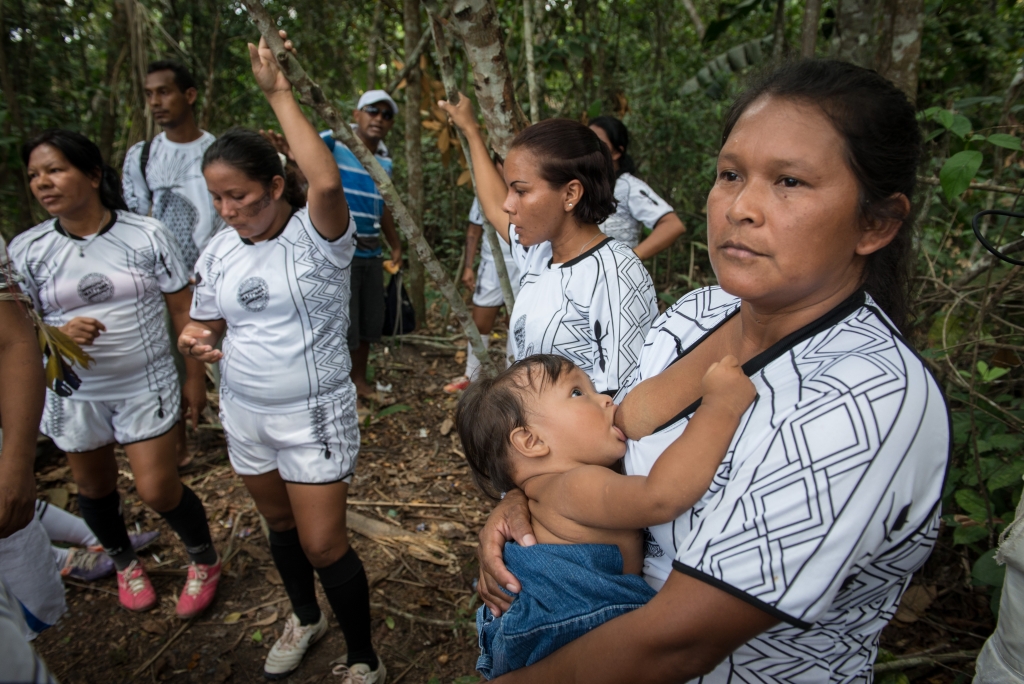 A player breastfeeds her baby during the final of Peladao, an amateur football tournament, in Manaus, Amazonas state, Brazil, November 24, 2013.

Like Peru, Brazil has been leading a major PR campaign for breastfeeding. Starting in the 1980s, the Ministry of Health bombarded mothers with messages urging them to breastfeed for at least six months, over TV, radio, newspapers and even utility bills and bank statements. They followed up with the memorable slogans: "You can breastfeed and work," "Your breasts will not drop if you breastfeed" and, somewhat disingenuously, "Make up your own mind." There were pictures of celebrities mid-nurse and posters of babies looking like boobs (tag line: "Made for each other"). Just in case women somehow missed the memo, the authorities also trained nearly 40,000 postal workers to proffer information on breastfeeding should they happen upon a pregnant woman or recent mother as they delivered the mail.

So determined is Brasilia that the nation's babies should get breast milk — even if their own mothers can't give it to them — that it established a nationwide network of human milk banks, the largest of its kind in the world. Supplies are donated by lactating women, who simply call a milk bank courier or specially trained firefighter to come and pick up their contribution direct from their home. The result: the proportion of Brazil's babies who receive only breast milk up to six months had shot up to 40 percent by 2006, from less than 4 percent 20 years previously. 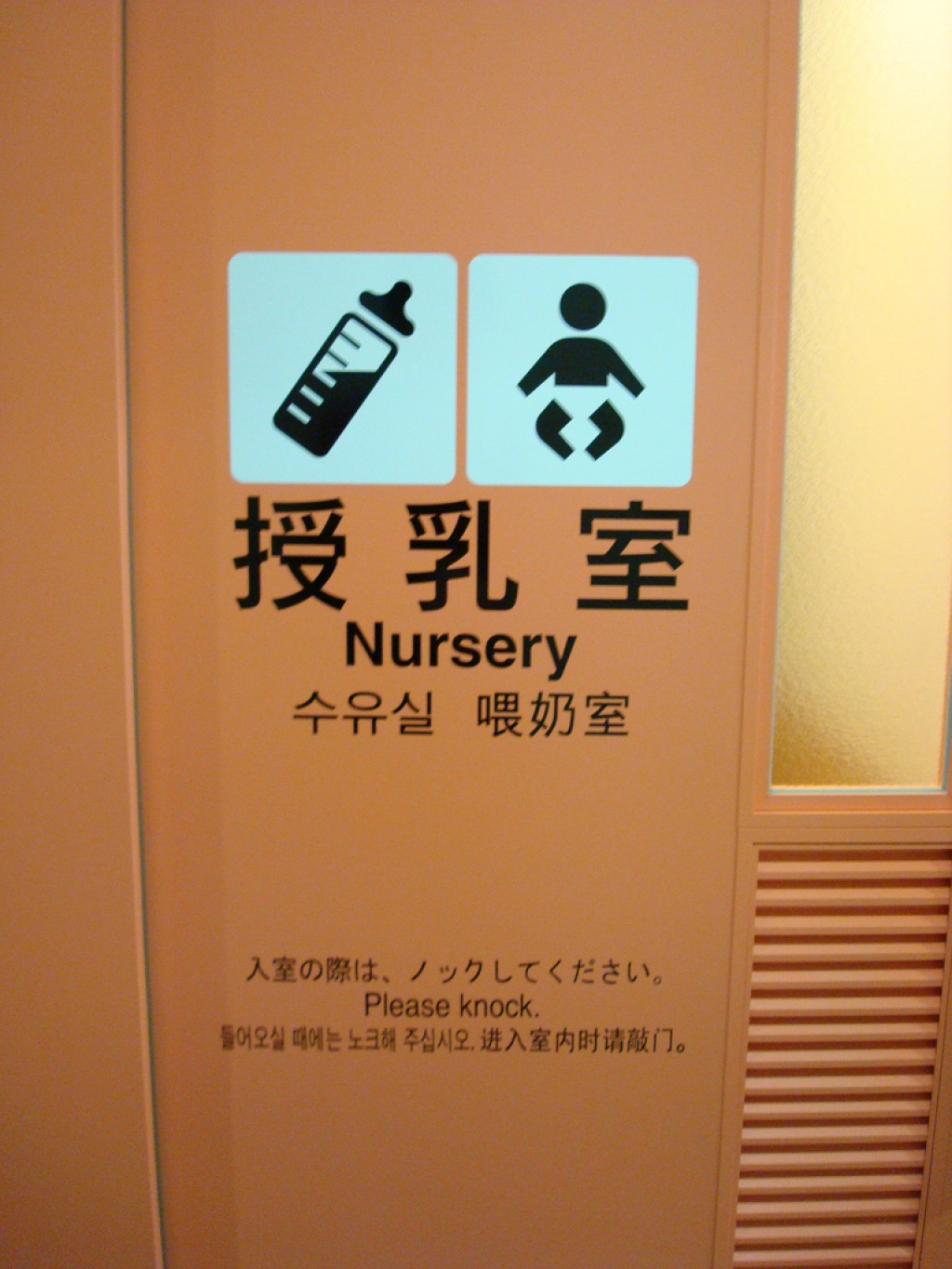 The entrance to a nursing room in Fukuoka Airport, Japan.

If you prefer to breastfeed in private and/or with all modern conveniences, Japan is the place for you. Anecdotally at least, the country offers women some of the easiest and most pleasant ways to breastfeed as part of daily life. What the Japanese seem to have realized is that mothers don't just spend their days between home and office: Often they also need to take trains, go to stores, fly out of airports, visit official buildings and generally use public space — and often with a hungry baby in tow. Free nursing rooms are commonly found in all these places (there are even apps to help you locate the most convenient one). Go through the door marked with a baby's bottle and a breastfeeder's paradise awaits: clean, spacious lounges large enough for strollers, private booths with nursing chairs, sinks and hot water for women who want to bottle their milk. Some even have play areas and picture books to occupy older children while their younger siblings are getting fed. All this helps to make breastfeeding the norm: 97 percent of babies born in Japan are at least partly breastfed. 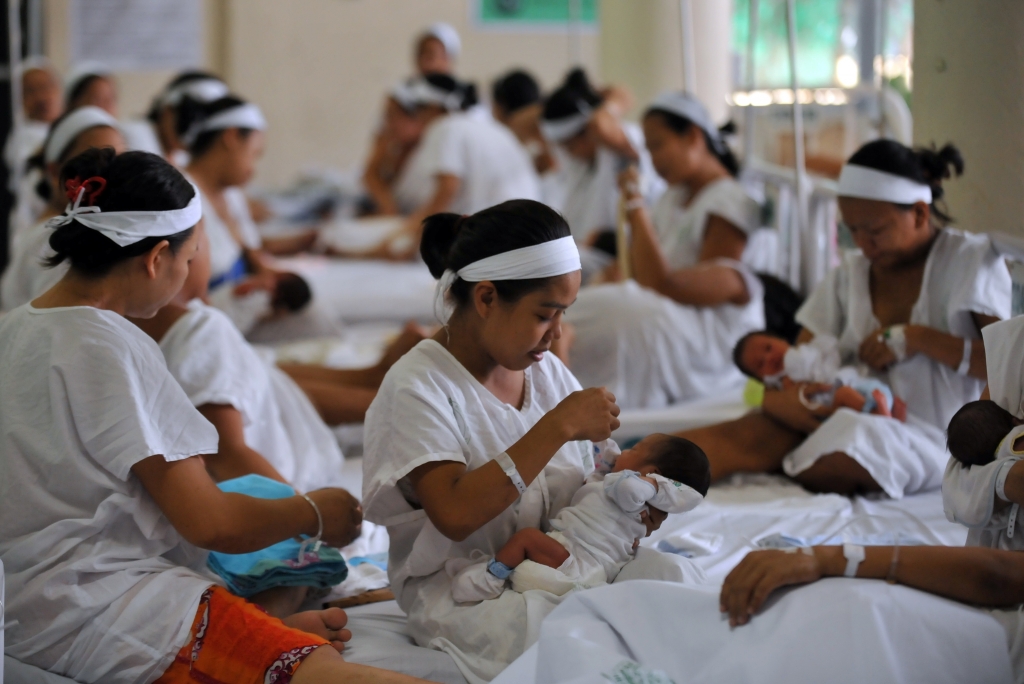 Mothers feed their newly-born babies at a maternity hospital in Manila, August 4, 2010.

How much does this country love breastfeeding? So much it has a world record in it: Most Women Breastfeeding Simultaneously (3,541). In the Philippines, women who want to breastfeed have the law on their side like nowhere else. For the past 20 years, the country's so-called Milk Code has stringently limited how makers of baby formula can market their products, banning them from giving away free samples, advertising within stores, offering discounts or making any suggestion, whether stated or simply by the use of pictures, that substitutes are preferable to breast milk. Violators risk fines, the revocation of their license or a prison term. Even amid the devastation that followed Typhoon Haiyan/Yolanda in 2013, the Philippines' department of health discouraged donations of formula and instead called on lactating women to give milk.

The country bolstered its support for breastfeeding women in 2009 with an act that required public establishments to install "lactation stations" fitted with comfortable seats, washing facilities, electrical outlets for breast pumps and refrigerators for storing milk. (Any establishments that fail to provide these facilities have to pay a fine, while those that do are eligible for a tax break.) Female employees are also guaranteed the right to at least 40 minutes of paid nursing breaks for every eight hours worked. Despite all these benefits, the national rate of exclusive breastfeeding for the first six months remains relatively low at just 34 percent. And to the dismay of breastfeeding advocates, some legislators — backed by the formula industry — are pushing to relax the ban on milk substitutes.