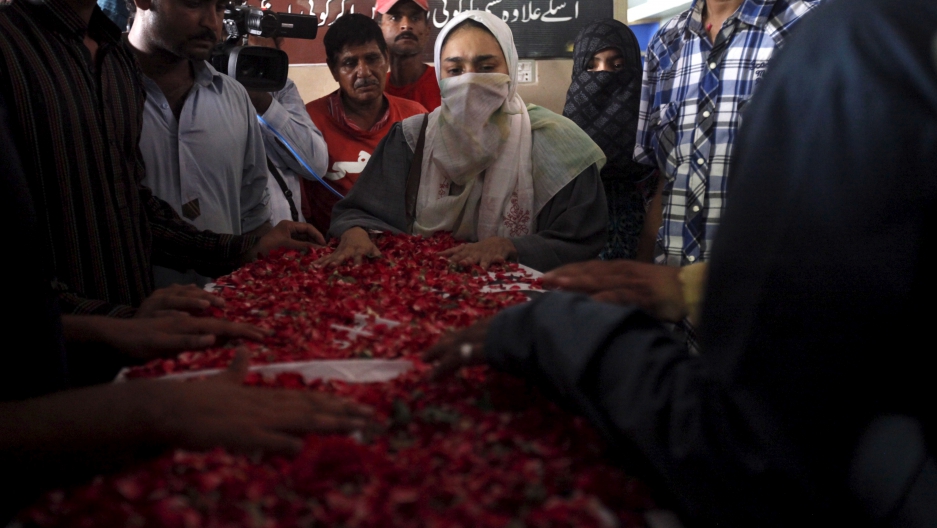 Relatives mourn near the coffin of Saulat Mirza, who was sentenced to death by anti-terrorism court in 1999 for killing three people and hanged in May, According to local media, Saulat Mirza who was convicted for murder was hanged to death at Balochistan's Machh Jail. Mirza had been on death row for nearly 17 years.

Nothing. The executioner says he tries to think of nothing on the job.

He does look forward, though, to tending to his roosters after work.

These days, Sabir Massih, 32, has been a very busy fellow. In December, his government reinstated capital punishment after a seven-year hiatus. Pakistan's move followed the Taliban massacre of more than 150 people at a school, most of them were children. In the last eight months, Pakistan has executed nearly 200 people, joining Iran, Saudi Arabia and China as the countries with the highest number of executions.

"Sabir Massih is responsible for at least a quarter of that number," says Shaimaa Khalil, the BBC's correspondent in Pakistan, who sat down for an interview with the executioner.

She wanted to know what goes through his head. What does he think about when he goes to the gallows to take someone's life?

Actually, nothing, he tells her. He just wants to go in and do his job in as little time possible.

Massih was rather detached, she says. He kept saying time and time again, 'Look, I don't really think about anything. For me, it's a technical thing. We have three minutes flat to get this done. I want to go in and out.'

"He saw how frustrated I was getting in terms of not getting any emotions from him. And he said, 'The thing you have to understand is that this is a job for me. This is what I get paid to do ... no, I don't feel anything.'"

It's a job that runs in the family. Khalil says Massih's great-grandfather, grandfather and father were also executioners. In fact, it was his father who showed him what to do for his first hanging.

"It was him who taught me at home how to tie a noose properly. The superintendent of the jail reassured me and said that there is no reason to get confused or to be anxious. He gave me the signal. I pulled the lever and opened the trap. It was only after I looked that I saw the person hanging. It was only a matter of seconds."

Massih tells Khalil that the only thing on his mind is heading home to his roosters.

"Of course, he saw how startled I was when he said that. He said, 'I have a hobby that I love very much. I breed roosters for cock fighting and that's what I go home to do ... I make sure they're okay. This is what I think about when I go home."