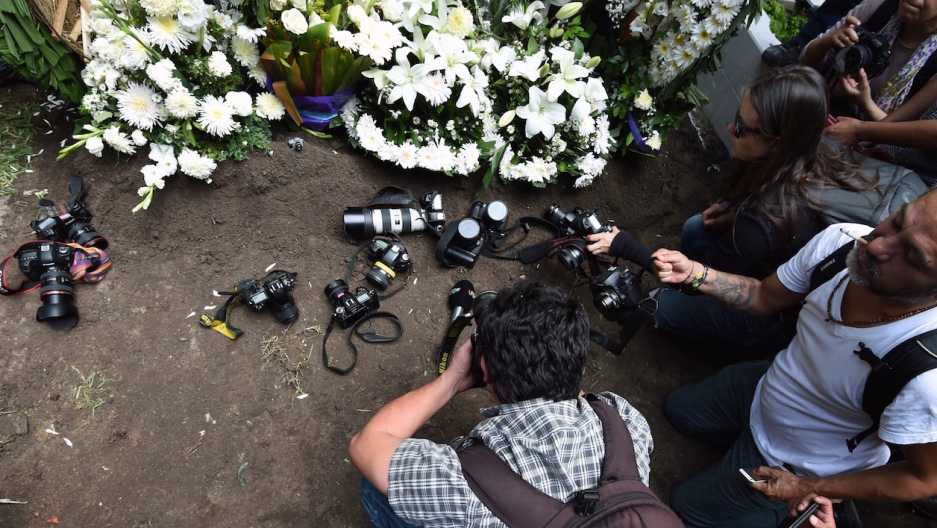 MEXICO CITY — Fear, anger and frustration are consuming Mexico's journalists after they buried another one of their own.

Photojournalist Ruben Espinosa was brutally murdered Friday, along with human rights activist Nadia Vera and three other women in a Mexico City apartment. A prosecutor on Sunday said police found them tied up, beaten and shot in the head.

The incident is under investigation and the motive is unknown.

But journalists are afraid that 31-year-old Espinosa was targeted after reporting on the local government in Veracruz state.

“Ruben's death has been a huge blow for everyone, not just those who knew him,” Mexican freelance journalist Heriberto Paredes said Sunday. He’d just spoken to Espinosa several days before he was killed.

“For us journalists who cover social movements and problems involving state authorities, these murders confirm our concerns that our lives are definitely in danger.” Mexican photojournalists hold pictures of their murdered colleague Ruben Espinosa during a demonstration held at Angel of Independence square in Mexico City, on Sunday.

Paredes was one of several hundred reporters who took to the Mexican capital’s streets Sunday, many holding masks of Espinosa in front of their faces. It was a spontaneous outburst of anger and frustration over the obscene violence that has plagued the country’s press for years.

They directed most of their anger at Veracruz’s governor, Javier Duarte. They walked toward his administration's Mexico City office, carrying signs calling for his resignation and shouting “Duarte out!” Others blamed both the governor and Mexican President Enrique Peña Nieto, who are fellow party members, for the deaths. “Duarte and Peña are murderers!” they cried. Protesters also gathered in other cities including Veracruz's capital, Xalapa. The Duarte administration said in a brief press release Sunday that the governor has called authorities in Mexico City to offer his support in investigating “the unfortunate acts of violence."

Prosecutors have not ruled out robbery or targeting of the women in the apartment as possible motives, Reuters reported.

Espinosa had been photographing in one of the deadliest states of one of the world’s deadliest countries for the press. At least 88 journalists have been killed in Mexico since 2000, 13 of them in Veracruz state during Duarte's term beginning in 2010, according to local human rights groups.

Most murders are never solved.

In February 2014, according to Reuters, one of Espinosa's photos of Gov. Duarte made it to the cover of Proceso magazine with the headline "Veracruz, lawless state."

Espinosa had said in interviews he felt threatened by the Veracruz authorities and eventually fled to Mexico City for his safety. Slain activist Nadia Vera had also said she was threatened in Veracruz.

Reporters across the country fall victim to violence, kidnapping and killing while investigating corruption or organized crime. Criminals and corrupt officials alike are often accused of being the perpetrators. Many journalists are furious at state and federal authorities who they say refuse to commit to protecting the press and freedom of speech.

“This is a national problem, one person cannot solve this,” said Cesar Ruiz, a columnist and one of the organizers of Sunday's protest march. “As journalists, we must have some kind of basic certainty that our job isn't high-risk.”

But according to Paredes, there are no guarantees. “We can't trust the institutions. We can't trust government programs supposedly set up to protect journalists,” he says. “They offer no protection at all, it's just not true. Everybody's afraid.”