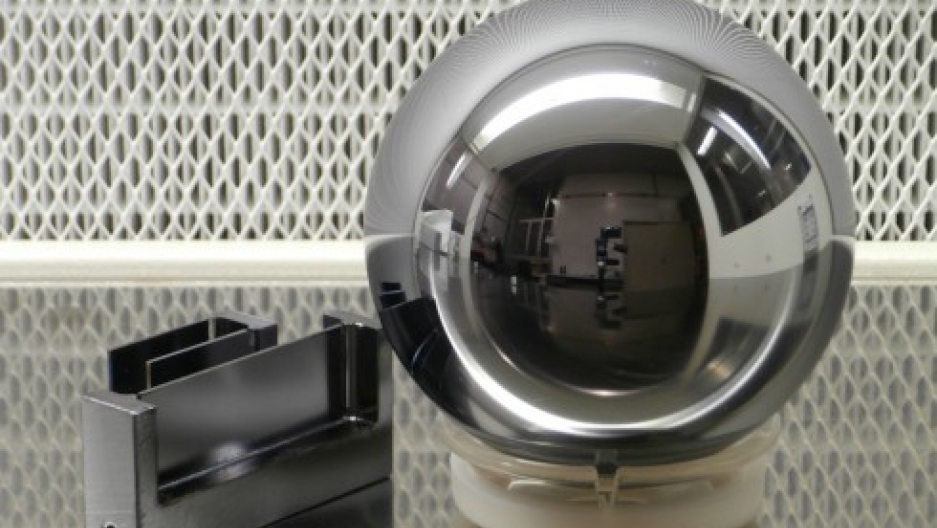 Researchers are using this spherical crystal of silicon in their quest to redefine the kilogram.

The kilogram was defined back in 1795 in the context of water — “one liter of pure water at a temperature of four degrees Celsius and at standard atmospheric pressure.” A physical standard — a hunk of metal — was adopted a few years later.

Today, the kilogram standard is the only remaining measurement standard that is based on a physical artifact.

That means all the scales in the world are ultimately calibrated against a 125-year-old piece of metal kept in a vault on the outskirts of Paris. Its mass is the world’s definition of a kilogram.

The current artifact, called “Le Grande Kilo,” is a platinum-iridium cylinder that has been in use since 1889. It’s kept under glass in an atmosphere-controlled vault at the Bureau International des Poids et Mesures in the outskirts of Paris. Identical standards are kept at locations worldwide and periodically compared to the original.

But in the 1980s, scientists began to notice a problem: When compared, the mass of the standards were not matching up. Either the copies had gained weight or the Le Grande Kilo was losing weight. Although the difference is nominal, about 50 micrograms — about the weight of a fingerprint — the effects of an unreliable kilogram standard would be considerable.

“When it comes to knowing the weight of everything, you can’t have your unit changing. That would be awful,” says Derek Muller, creator of the Veritasium science education series. “Not only would it affect the kilogram, but it would affect other [International System of Units] like the ampere, the candela and the mole, all of which depend on the kilogram. This is like a foundational crisis for science when you can’t trust your units, then you got real problems.”

Many in the scientific community want to shift from using the physical artifact as the standard to a standard that is more scientifically defined. Muller says that are several competing proposals. He recently was able to see one up close.

“One of the most fascinating approaches was to make a perfect sphere out of silicon that weighs exactly one kilogram, and this was the object that I got to hold,” Muller said. “The roundest object that man has ever really created.”

The sphere was made from silicon-28, a stable isotope that is produced similarly to how uranium is refined. By knowing the molecular weight of silicon and using the Avogadro constant, it would be possible to calculate the number of silicon atoms in the sphere. The kilogram standard could then be defined in those terms, rather than as a physical object.

“Ultimately, we’ll be defining a kilogram based on a concept, which means, destroy the spheres, it doesn’t matter,” Muller said. “It doesn’t change our definition of the kilogram because the kilogram is a concept. It’s not an actual physical object which can change.”

Another proposed method to define the new standard is called a “watt balance.” To illustrate, a balance scale compares the weight, or the gravitational pull, of the two objects on each side of the scale. Balance the scale, and the weights of the objects can be said to be equal.

But there are other ways to create forces, says Jon Pratt of the Fundamental Electrical Measurements Group at the National Institute of Standards and Technology in Gaithersburg, Maryland.

Electromagnetics using voltage and current is one way, he says. Instead of a similarly weighted object to balance the scale against the kilogram, an electromagnet is used to pull down the other side of scale. Electromagnetic scales are used “all the time,” and most mass balances work on this principle,” Pratt says

Of course, if scientists do their job really well, no one will ever notice that a kilogram is defined differently than before.