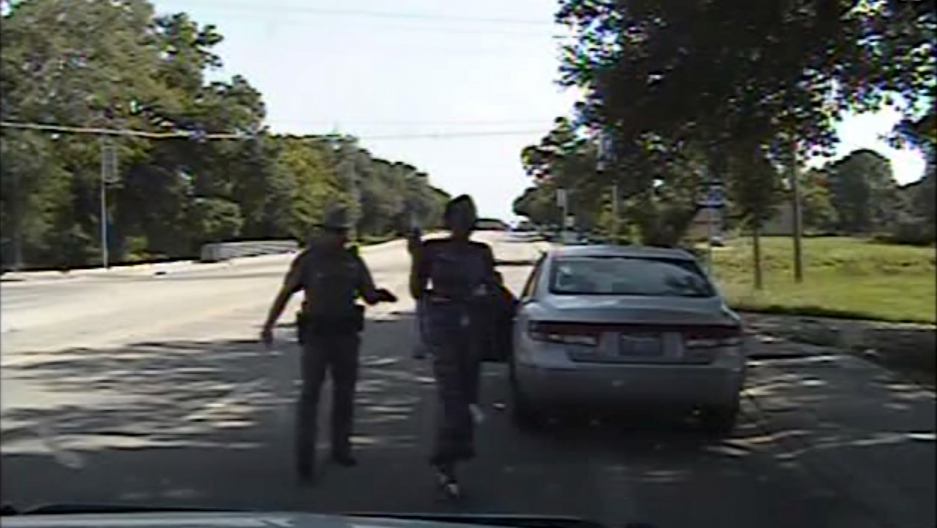 Texas state trooper Brian Encinia points a Taser as he orders Sandra Bland out of her vehicle, in this still image captured from the police dash camera video from the traffic stop of Bland's vehicle in Prairie View, Texas, July 10, 2015.

Courtesy of The Texas Department of Public Safety

“I think something very bad happened to her. I really, really do."

That comment from Sharon Cooper, the sister of the late Sandra Bland, contains a lot more meaning than those 12 words.

Last weekend, Bland, a 28-year-old Chicago native, was laid to rest in Lisle, Illinois. Bland was found dead in her jail cell earlier this month after she was arrested during a traffic stop in Texas.

Though initial autopsy results have concluded that her death was a suicide, several questions remain. And Roxane Gay, the author of “An Untamed State” and “Bad Feminist," says Bland's death shows that the United States has not come to terms with race and America’s legacy of oppression.

“I think we have to start doing better,” she says. “Part of it is accepting our privilege and not demanding subservience simply because someone is wearing a uniform.”

As images of police brutality and misconduct dominate TV networks and social media sites, Gay says many African Americans fear that any interaction with police officers — even a simple traffic stop — could lead to death.

“Increasingly, unfortunately, we do start to believe that,” she says. “We’ve known it for a long time, but we’ve seen so much evidence of it this year — of black people being arrested and not coming home. It doesn’t matter what you do—you could be law abiding and you could still be arrested just for being black in a country where your presence is resented. It’s more than a fear, it’s this uncomfortable burden. It’s this uncomfortable reality that we’re forced to live with, and it starts to shape how you see the world. It’s hard to be optimistic in a world where you feel endangered.”

Gay argues that police officers feel empowered to “treat black bodies as if they’re nothing; as if they are disposable.” She adds that white Americans who say that black people need to simply respect the police in order to avoid situations like this are missing the point.

“Respect goes both ways,” she says. “It’s absurd—when you look at the video of the dashcam when Sandra Bland was arrested, she answered the question he asked her: ‘You seem irritated.’ Well, of course—there’s nothing pleasant about getting a ticket. This idea that we’re supposed to be meek, docile, and happy to be pulled over is offensive at best.”

But Gay also says that cases like that of Sandra Bland are about more than attitude. It’s about, she says quite frankly, being black.

“We get pulled over simply because we are black and because we are driving,” she says. “We live in our bodies, and it is about the privilege that white power has over the black body, and the fears that we are forced to carry within our bodies from day-to-day. Time and time again, we have seen that white privilege, white power, and white supremacy is determined to eradicate the black body.”

Gay says that while white privilege is not something to be ashamed of, whites should be aware of how it shapes their own lives and experiences, and how a lack of that privilege shapes the lives of people of color.

And as a larger black woman that also stands at 6-foot-3, Gay says that she often fears being mistaken for a black man.

“I hate that I have that worry, but it’s very real,” she says. “People look at me and they don’t see my PhD or my best selling book—they just see my black body that is imposing. They read danger, and I’m just going to the store.”

“The more you think about what happened to Sandra Bland, the more senseless it is, and it forces black people to remember what it’s like to live in a black body,” Gay adds.