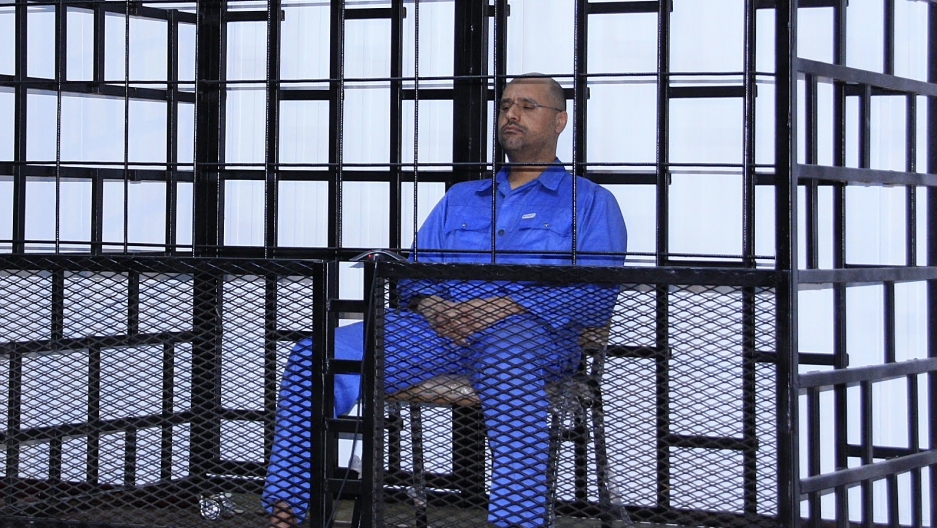 Saif al-Islam Gaddafi attends a hearing at the beginning of his trial in 2014. Here he’s seen in a courtroom in Zintan, linked via video to the actual trial in the capital, Tripoli.

Muammar Gaddafi was butchered by a mob during the 2011 revolution that overthrew his tyrannical rule in Libya.

Once nicknamed the Mad Dog of the Middle East by Ronald Reagan, Gaddafi had ruled the oil-rich North African nation for more than 40 years. He installed close relatives in all key positions.

His heir apparent was his son, Saif al-Islam Gaddafi. On Tuesday, Saif al-Islam was sentenced to death by a court in Libya, for directing war crimes committed during the uprising.

“He was accused of ... recruiting mercenaries, attacking civilian targets, and shooting into crowds of protesters,” says journalist Marine Olivesi. Olivesi covered the revolution and has returned to Libya often since then. “He was also convicted of incitement to murder and rape. Basically he engaged in the same threatening behavior [and] repression tactics ... as his father.”

Before the revolution, Saif al-Islam was regarded as the great white hope for Libya. Western-educated, he espoused many western values, and there were hopes he would introduce reforms if he succeeded his father.

However, it’s not clear if the verdict of the court can be carried out. Saif al-Islam is not in the custody of the Libyan faction that currently controls the capital of Libya. Libya currently has two governments, two parliaments and two judicial systems. But even these are weak and in many districts, power resides with local militias.

Saif al-Islam is being held by the faction that captured him back in November 2011, a month after his father’s violent death. He’s believed to be in the western mountain city of Zintan. He did participate in a handful of court sessions, via video-link. “They see him as the ultimate bargaining chip,” says Olivesi.

Human rights groups have criticized the trial, saying Saif al-Islam was barely able to attend the trial, and was not granted proper legal representation.

Libyans are largely indifferent to the case, Olivesi notes. “Because they are so embroiled in the current conflicts tearing the country apart.”

The verdict is subject to appeal.