Icebergs recently calved off the Helheim glacier float in the Sermilik Fjord in southeastern Greenland. The glacier experienced a rapid melting event in the early 2000s, and is now Greenland's second-fastest moving glacier.

Greenland is melting fast, and that's bad news for sea level rise and other impacts of climate change.

“I don’t mean to make it sound so scary,” reporter Ari Daniel says by satellite phone from the cusp of Greenland’s Helhiem glacier. “This is one of the fastest-moving glaciers there is [here], it moves about three feet in an hour, you can almost see it [move].”

Get involved in the conversation

Reporter Ari Daniel will be on Reddit to answer your questions about melting glaciers, rising sea levels and life on a glacier on July 31 from 12-1 p.m. EDT.
So, what do you want to know?

That is extraordinarily fast, so don’t assume all of Greenland’s glaciers are pushing out ice so quickly. But the fact is, Daniel says, that all across the island’s massive ice sheet, ice is moving — and melting — very fast as the air and sea around it warm. And that’s why the researchers he’s camped out with this week and next are there — to try to figure out exactly what’s happening with the Helhiem glacier, and to open a new window into what’s happening to the rest of the northern hemisphere’s only ice sheet.

How fast is it melting? How much fresh water is it pouring into the North Atlantic? How will that contribute to local and global sea level rise? And how might it affect the temperature- and salinity-driven ocean currents that regulate regional temperatures on both sides of the Atlantic? Climate change is bringing big changes to Greenland, and that could mean big trouble for the rest of the world

On the Helheim, Daniel says those changes are literally written into the rock wall of the glacier’s canyon. 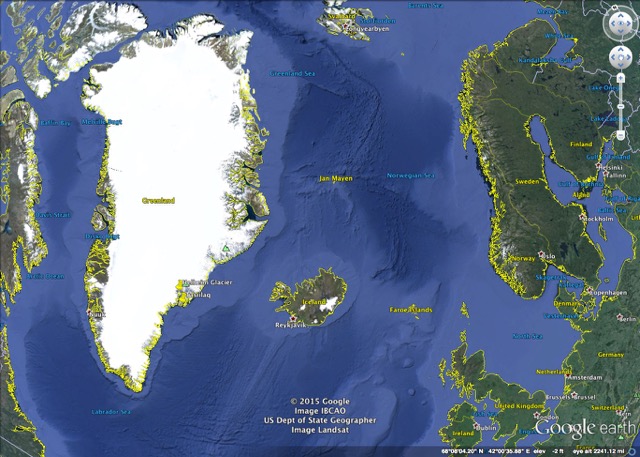 The Helheim glacier spills out into the Atlantic near the tiny hamlet of Tasiilaq, in southeastern Greenland, due west of Iceland.

“As I look across the glacier now,” he says from his perch on the glacier’s rocky margin, “there’s something called the ‘bathtub ring,’ a pretty striking color contrast between the mountainous rock above the line and below the line… That was the glacier’s height back in the early 2000s, meaning that there was a kind of massive melting event within the last 10 years.”

No one knows exactly why that happened. There’s a lot of melting from warm air going on in Greenland. But the rapid advance may also be due to changes from warmer seas below.

“We’re seeing warmer water in the north that’s entering the fjords and starts kind of touching and tickling the glaciers,” Ari says. “That could lead to more melting.”

And that, he says, has repercussions for sea level rise.

Daniel is following the work of two research teams. One, led by glaciologist Gordon Hamilton of the University of Maine, is using laser-mapping to image the calving of Helheim Glacier into Sermilik fjord in unprecedented detail. The other, led by oceanographer Fiamma Straneo, of the Woods Hole Oceanographic Institution, is using a new chemical tracer technique to determine which parts of the same glacier are melting into the sea.

Ari says the research teams put in about 10-hour days deploying equipment and taking measurements on the glacier.

“It’s one long day,” he says, but it’s not just because of the work. “There is really no darkness at this time of year,” even in southern Greenland where they’re camped out, west of Iceland.

And he says that also leaves a lot of time for exploring what is still an extraordinary part of the world.

“I just stepped off of a helicopter ride,” Daniel said on Monday. “We got to fly down the glacier itself and see just how incredible it is. It’s a four-mile wide canyon filled with snow and ice. It’s heavily crevassed, and sprinkled on top there’s a dusty gray layer and it just goes on as far as the eye can see. And right in front of me, there’s this 30-story high snow cliff, and that marks the boundary between the end of the glacier and the beginning of where it starts to calve into the sea.

“Last night we went on a ‘night hike’… a bit of a misnomer,” he continued. “We hiked up over the pass and came across these small glacial ponds that are absolutely pristine. There’s moss and lichens, it’s just exquisitely beautiful. And the Greenland ice sheet was just a couple of miles away, the large icy mass that sends its fingers down into the fjords where it forms these glaciers that then clave off into the sea. So I was looking at that ice sheet, and it’s just spectacular.”

Just don’t think of all that ice melting into the Atlantic.

Ari’s reporting from Greenland is supported by special funding from the Pulitzer Center on Crisis Reporting. You can catch his reports from Greenland this fall on The World and NOVA online. You can follow Ari Daniel on twitter @mesoplodon and on Instagram at mesoplodon_.

The dark "bathtub ring" on the rim of this fjord in Southeast Greenland marks the level of its glacier just a few years ago. As glaciers recede, they expose freshly eroded surfaces that are often a different color than rock that's long been exposed to the elements.