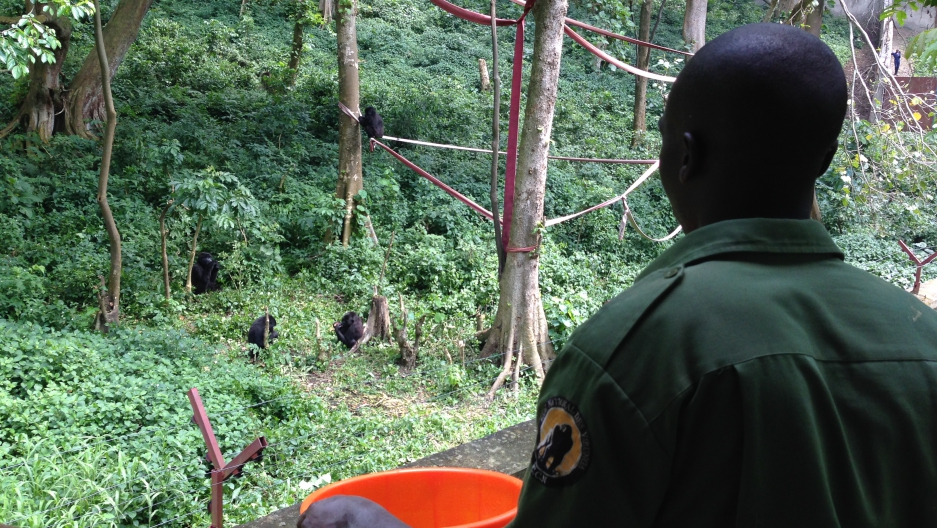 A ranger at the Virunga National Park in the DRC feeds the park's gorillas, who are under threat from poachers.

In the small town of Rumangabo in the Democratic Republic of Congo's Virunga National Park, lead ranger Innocent Mburanumwe, 38, leads a trail through the verdant forest to visit a group of baby gorillas.

Wooden stairs lead to a platform among the trees, and we observe from there as another ranger comes by with a bright bucket of fruit to feed the gorillas. Mburanumwe describes the gorillas’ habitat, smiling as we watch the gorillas eat.

He’s happy to see the gorillas thriving now. From the 1960s to the 1980s, gorillas here were killed in large numbers. Their hands were popular for use as ashtrays. Baby gorillas were en vogue, too, taken from their families and sent to private collections and zoos. By the late 1980s there were only 254 gorillas left in the park. But now, they are making a comeback. Today there are close to 1,000 gorillas in Virunga.

This, in part, is thanks to the work of Emmanuel de Merode, 45, a Belgian prince and director of Virunga National Park. He was hired in 2008 after a brutal massacre of silverback gorillas. His task was to clean up the ranger system — getting rid of anyone who was involved in rebel activity. In one year, he slashed the number of rangers from about 1,000 to just over 200.

The park now employs about 500 rangers. They patrol the park — confronting poachers and pulling out snares used to trap animals. And it’s making a difference, but it’s dangerous work. Just a few weeks ago, rangers caught a poacher attempting to kill a buffalo and an elephant. The poacher and rangers exchanged gunfire. They ultimately brought the offender to Rumangabo for further questioning and he was later taken to court. No one was harmed, but exchanges like this don’t always end so cleanly. On June 18, a Virunga ranger died after a battle in the center of the park, near Lake Edward. Three other rangers were injured. De Merode told National Geographic he’s been to 22 funerals since he started his job.

Many of the poachers in Virunga National Park are members of local militias. The DRC’s government is about 600 miles away in the west, so people in the remote eastern parts of the country can feel detached from the rule of law. Militia leaders have taken advantage of this — killing animals and encouraging local villagers to sell the meat for a small profit. But most of the money goes back to the militias. They use this money to to buy weapons and air time for phones. The weapons often come from corrupt Congolese soldiers.

But other poachers hunt to support themselves. 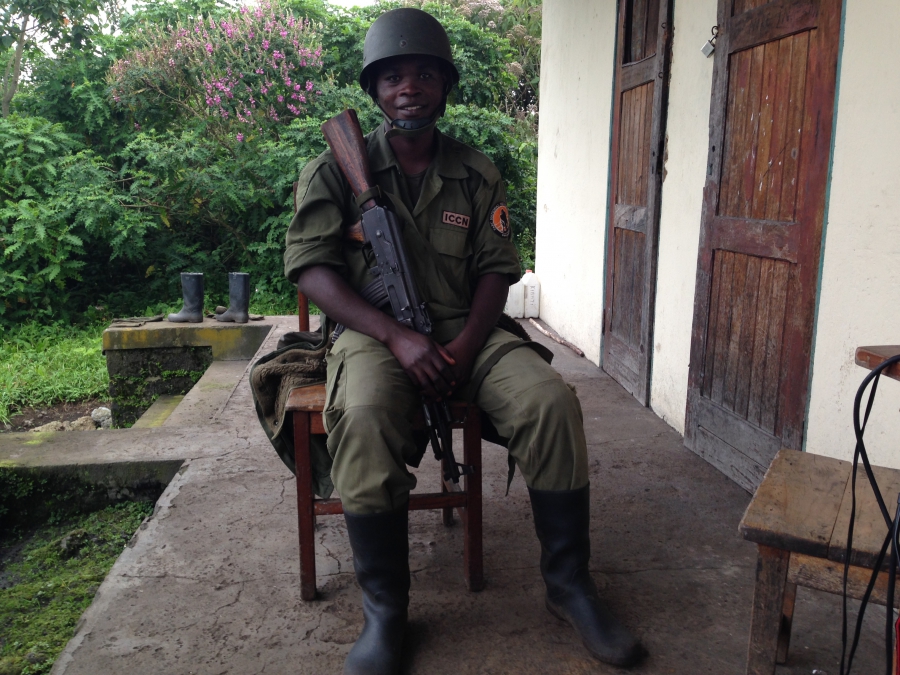 Some of Virunga National Park's rangers, like Cyrrile Mburanumwe Kwiseka, were once poachers. Now they work to protect the area's wildlife.

Cyrrile Mburanumwe Kwiseka started poaching when he was about 14. He built traps with stones to catch animals. He used some of the meat to feed himself, but he sold the rest in neighboring cities. The poaching he did had nothing to do with rebel activity and everything to do with survival. Kwiseka says thinking about the well-being of the animals just wasn’t an option. “If you didn't go in the park to catch animals and cut trees, you couldn't live a good life,” he says.

At age 21, he and two other villagers got caught. “We were arrested and put in a cell in Virunga National Park. And they asked us to pay the fine that people pay for doing poaching,” he says.

The fine was $20 to $30. He couldn't afford it. He eventually entered a program where ex-poachers become rangers. He’s been a ranger ever since. He’s now 38, with a wife and six children, supporting himself by protecting the animals he used to hunt. He dreams of buying a plot of land and making sure his kids get the best education possible, especially because he never finished school. And he talks to his children about poaching — to make sure they understand the true risks — both for the animals, and for themselves.