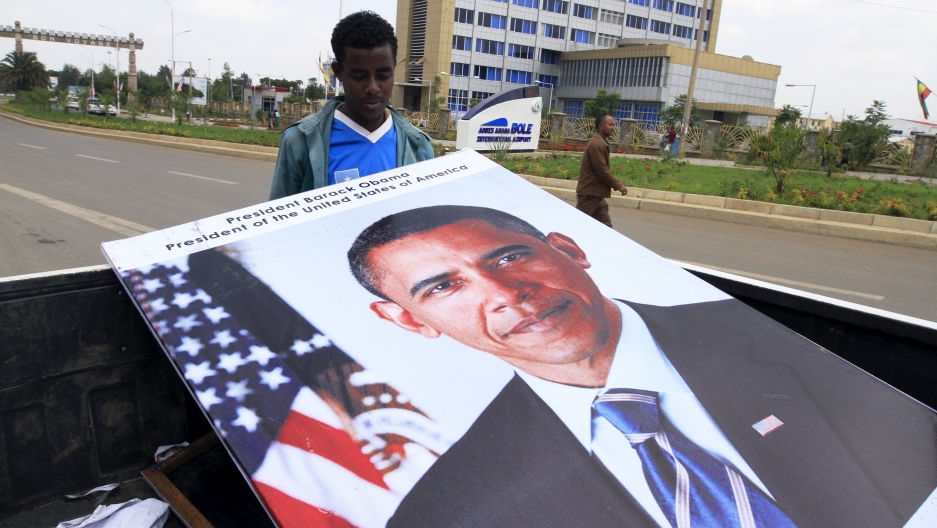 President Barack Obama's visit to Ethiopia this week has produced a flurry of media coverage about the Horn of Africa nation, a lot of it focused on its lack of democracy.

Many of Ethiopia's neighbors share its autocratic tendencies. But other traits set the Horn of Africa nation apart from other countries in the region.

"There's the mystic of the Queen of Sheba. There's the belief that the Arc of the Covenant ended up there, they still have it in a church," says Abraham Verghese, a physician and the author of the novel Cutting for Stone.

Verghese was born in Ethiopia and grew up near the capital Addis Ababa. He was a medical student there when Emperor Haile Selassie was ousted in a coup in 1974, after ruling for half a century.

"There's an old monarchy that goes back a long, long way," he adds. "The people are predominantly Christians surrounded by Muslim nations, and it's a very different culture, I think, than many other African nations."

Indeed, lions still roam the palace grounds in Addis Ababa, a practice begun by Selassie, the last emperor in the 3,000-year-old monarchy.

Democracy hasn't exactly been thriving there since. During the recent parliamentary election, every seat was awarded to the governing party. Verghese hopes Obama's visit this week will spark a new, more forward-thinking era for Ethiopia.

The sitting US president, he says, is "enormously popular" in Ethiopia, and can help to change minds there.

"I can't imagine that his charisma, his charm, won't work some magic and soften the hearts of people who think it has to go a certain way," he says. "There's an earnestness about him, there's a connection to Africa which I think has great appeal. People lose sight of how he's perceived elsewhere."

Verghese says during his stay in Ethiopia, the US president should visit the country's many shanty towns and find inspiration in the smiles of the children there.

"I hope he'll take a walk through some of the impoverished slums and I hope he'll feel that natural love and joy that bubbles up in that sort of community," Verghese suggests. "I think he will, and I think he'll see that."