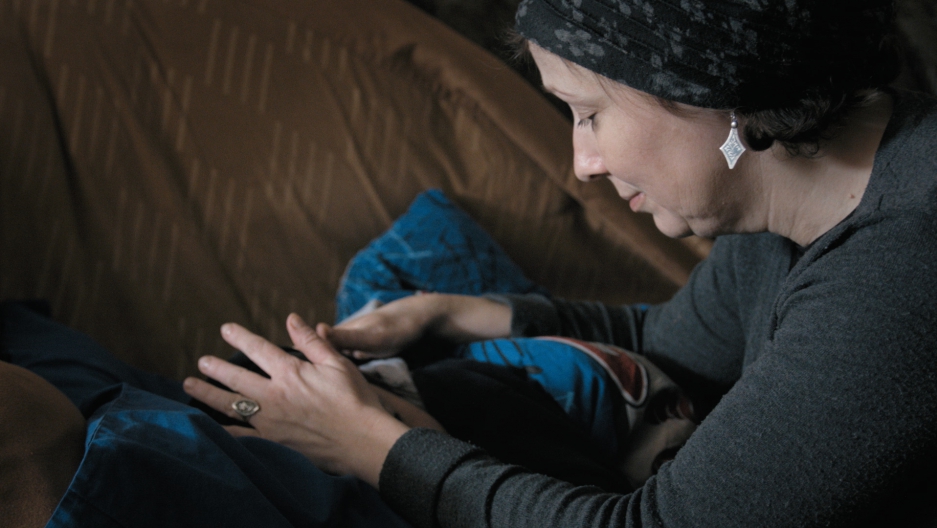 Yigal Amir's wife, Larisa Trimbovler, with their son, Yinon from the documentary, Beyond the Fear. Amir got married and fathered a son after he went to prison for the assassination of Yitzhak Rabin.

Courtesy of Beyond the Fear

Israeli Prime Minister Yitzhak Rabin was on the cusp of making a peace agreement with the Palestinians 20 years ago when Israeli ultra-nationalist Yigal Amir shot and killed him a peace rally in Tel Aviv. Amir was given a life sentence.

But the story doesn’t end there.

After he was put behind bars, Amir married, and fathered a child. Now, there’s a new documentary about Amir’s family — and it has created a firestorm in Israel.

Though Israeli filmmakers usually love tackling their country’s sore spots, the family life of a man who assassinated Rabin is probably Israel’s biggest sore spot, and no one had ever done a documentary film about it — until now.

At the beginning of the documentary, there are dramatic views of the Israeli desert, where Yigal Amir is held in a maximum-security prison in solitary confinement. In an opening scene, Amir’s wife and young son are driving down to visit him.

The film is called Beyond the Fear, which partly refers to the fears of the filmmakers about whether to do this film at all.

“What does it mean you are going to make a film about Yigal Amir? How are you going to present him?” says Israeli documentary scholar Shmulik Duvdevani, explaining the filmmakers’ dilemma.

The film offers a nonjudgmental look at Amir’s family. His wife, a Moscow-born immigrant to Israel named Larisa Trimbovler, began writing to Amir when he was put in prison. She was sympathetic to his cause, opposing Rabin’s moves toward peace. She got permission to visit Amir, fell in love, divorced her then-husband, and married Amir.

There’s just one very short scene in the film where she talks about her husband’s actions. She says she saw Amir as an idealist, a good person who was driven to despair and sacrificed himself for the sake of others.

After a very public court battle, she and Amir won the right to a conjugal visit, and their son Yinon was born.

Tape recordings of the bedtime stories Amir tells his young son, over the phone from prison, are some of the most hypnotizing parts of the film.

Amir tells his son stories about biblical heroes who act alone and persevere with God’s help. Film critics in Israel have said Amir seems to portray himself to his son as a biblical hero.

The whole thing sparked a scandal in Israel. The Culture Minister threatened to cut government funding to a prestigious Israeli film festival if it screened the film. The documentary ended up getting two back-to-back screenings on the sidelines of the festival.

One Israeli, Amiram Goldblum, who described himself as a “film lover” and a “peace lover,” stood in protest outside the auditorium where the documentary was to be screened.

“This film is in support of a murderer who did the worst murder in the history of Israel,” he said. “This is unacceptable, that support to this murderer, after 20 years that he is in jail, will be shown in the main Israel film festival.”

In an interview, Russian co-director Maria Kravchenko defended the film.

“I don’t think that people will change their minds about the characters of the film or about the events that are described there,” Kravchenko said. “But I just want them to stop for a moment and think — to think if everything is so really one-sided in life.”

At the film's Israeli premiere, I sat in the second to last row next to a religious Jewish Israeli doctor named Nehama Peretz.

Born in the Soviet Union like Yigal Amir's wife, Peretz said she felt sympathy for Amir's ideas, and had even befriended his wife. But she said she is hesitant to speak about it openly in Israel.

When the film ended, Peretz said it was a rare sympathetic portrait of Amir's family.

“I think it important for everyone to see,” she said. “This film maybe takes us out of our comfortable area to see Yigal Amir's family and to think.”

Some people think Amir's wife has made a noble sacrifice. Others think she is crazy. Many simply don’t think much about it.

When Israel locked Yigal Amir in a prison nearly 20 years ago, many Israelis put the whole affair – the assassination of a man striving for peace – out of sight and out of mind.