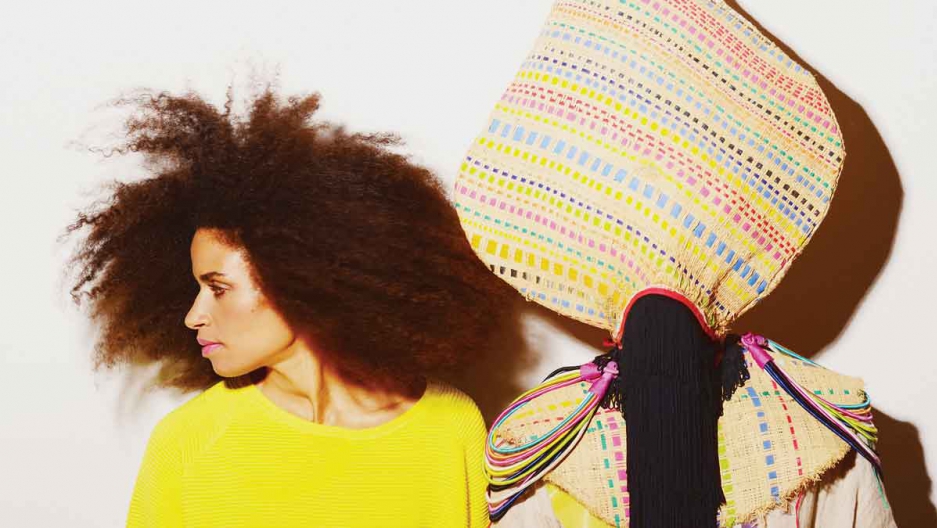 You might think a band called OY would be, I don’t know, a kind of hipster klezmer outfit. But in this case, it’s an art-pop duo from Europe.

One half of OY won’t reveal his real name. But he goes by 'Lleluja-Ha'. "Like hallelujah, reversed," he says. It’s a stage name.

Lleluja-Ha and the other half of the band, Joy Frempong, are both Swiss. They’ve been making music together for about three years, based in Berlin. She writes and sings; he produces and plays drums.

Their most recent album is called "No Problem Saloon." It began as a set of field recordings when, a few years back, Joy Frempong went on tour — not with OY but with an audio recorder. She was born in Ghana, so she headed there and beyond.

"I was curious to know other African countries as well, because the picture often of Africa is it’s one place," she explains.

Frempong made stops in Mali, South Africa, and Burkina Faso — recording local sounds, local music, and local people, including a guy she met in a town in northern Burkina.

"He was a taxi driver and storyteller," she remembers, "Ismail Sabadougou."

Frempong was looking for traditional stories wherever she traveled, and was excited to find a young guy telling stories in new ways. "In his taxi he talks to people; he tries to find out how people work, and from that create new anecdotes and stories.

The voice of the taxi driver, Ismail Sabadougou, appears on "No Problem Saloon".

"A friend of his is called 'God’s Destiny', and so the day he introduced me to his friend I said, really, is this your name? 'Yeah, God’s Destiny!' — and this little sample of him — destine de dieu — and his laughter appear in the track, 'My Name is Happy'."

Joy Frempong returned with more sounds: everything from taxi doors to rusty washing machines and fireworks — things Lleluja-Ha could use back in the studio.

They give OY’s music a kind of documentary quality. There's poetry too, imported from local proverbs she collected along the way. There’s one from Ghana, for example.

"It’s about a tortoise that plays the accordion and sings," says Frempong. "A hunter finds this tortoise and wants to show off at home with it. And he brings it to the chief, and the chief doesn’t believe him — this guy is actually a notorious liar. So [the chief] says, OK, this is the last time you’re lying: you have to prove that this tortoise can sing, and if it doesn’t you’ll be killed.

"So the hunter brings it to the court, and the whole village is there, but the tortoise doesn’t sing, it doesn’t play. He begs it to sing and play, but it doesn’t.