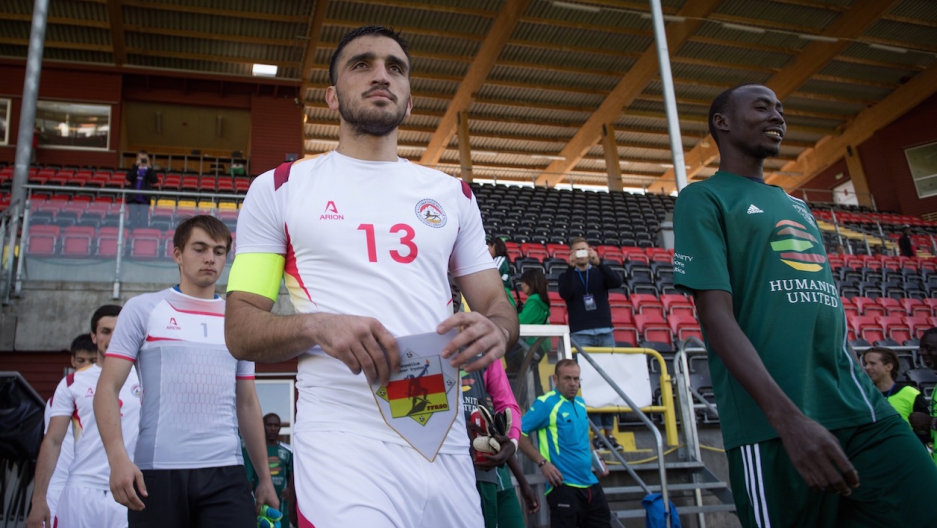 KYIV, Ukraine — For soccer fans fed up with the corruption scandal swirling around FIFA, wishing for a governing body that loves the game more than the dollars it brings in, it turns out there may be an alternative: the Confederation of Independent Football Associations, also known as CONIFA.

That’s because they represent teams from unrecognized states, minority communities and other lesser-known regions left out of FIFA and the larger soccer world.

Take, for instance, the self-proclaimed Nagorno-Karabakh Republic, an ethnic Armenian region that broke away from Azerbaijan in the early 1990s and remains unrecognized by the international community.

Or the Arameans, an ancient Semitic people rooted in lands that now comprise modern-day Syria.

There’s even Darfur United, a team of refugees from the western Sudanese region that’s been locked in conflict for more than a decade.

At a time when big money plays an increasingly central role in sports, CONIFA claims it’s bringing international soccer back to basics by connecting disparate cultures and fostering a fundamental love for the game.

Founded in 2013, the confederation is based on a similar organization that hosted international tournaments for micronations and other minority communities before descending into controversy and petering out.

This instructional video gives a good overview of what CONIFA is all about:

The confederation is picking up where the N.F.-Board, its predecessor, left off.

It staged its first World Football Cup in Sweden last year, where the County of Nice, from France, defeated the Isle of Man in an event that brought together 12 different teams. During its European Cup last month, held in Hungary, Nice was bested by Padania, a region in northern Italy with a history of fleeting separatist movements.

Sascha Düerkop, CONIFA’s general secretary, says these games have helped make good on his organization's chief mission of giving teams left out of FIFA a chance to meet head-to-head.

“It was the first time South Ossetians [from a breakaway region in Georgia] spoke to Darfuri refugees, probably,” he told GlobalPost, referencing last year’s cup.

Next year’s world championship is set to take place in Abkhazia, a Black Sea region that split from Georgia shortly after the collapse of the Soviet Union.

The breakaway state has been central to the bitter diplomatic relations between Georgia and Russia, Abkhazia’s political and economic patron. And that’s raised an unavoidable issue whenever international recognition is concerned: politics. A soccer stadium in Sukhumi, the Abkhaz capital, which is set to host next year’s World Football Cup.

Case in point: Just last month, Hungary refused travel visas to both the Abkhaz and South Ossetian teams ahead of the European Cup. CONIFA claimed it was an “unwanted political message.”

Last year, the Nagorno-Karabakh team came under fire from Azerbaijan’s soccer federation, which asked its Swedish counterpart — and even FIFA — to keep them out of the competition World Football Cup. That didn’t work.

Düerkop says CONIFA does its best to leave politics out of the picture, even if it doesn’t always end up that way.

“Politics comes in,” he said, “but it mainly comes in from the outside, not from inside CONIFA.”

He points to the organization’s refusal to allow its 26 member federations to use political symbols in their logos. (The “Free Tibet” campaign, for example, wouldn’t pass muster, Düerkop says.)

But those are the downsides.

Against the backdrop of the unfolding FIFA scandal, CONIFA has seized on the opportunity to highlight its founding principles. In May, it released a statement that held back from outright condemnation but reasserted CONIFA’s commitment to “very high moral values.”

Düerkop says CONIFA is studying FIFA’s experience and learning how to “close the traps” that ensnared soccer’s governing body, such as the murky bidding process for hosting rights.

CONIFA prides itself on its transparency: member federations have a say in how the organization’s money, which comes from sponsors during championship games and the board’s private funds, is spent.

“We see ourselves — and I think FIFA should do the same — more or less as a service to our members,” Düerkop said.

“Because if our members run away, we can’t do anything anymore,” he added. “We are only there to give them a platform, and not the other way around.”